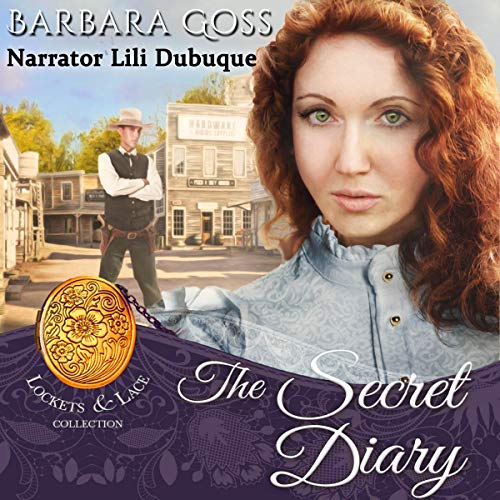 Secrets are told, so that with time, they may be discovered.

Were Betsy Wheeler’s father and brother criminals? The sheriff, Noah Sommers, intends to find out and arrest them.

Betsy finds her mother’s diary, and is confused by the entries because they didn’t make sense at first. When she finds the key to the entries, she discovers more than she’d ever imagined. Things were far from what appeared on the surface.

At first meeting, sparks flew between Noah and Betsy. They didn’t like each other. Would the shootings, and murders bring them closer or further apart?

What listeners say about The Secret Diary

A very good combination of talented author, Barbara Goss and narrator, Lili Dubuque for this audiobook which I enjoyed thoroughly. The story was good, the characters strong, the villains believable and not nice people, the elderly relations absolutely delightful, the mystery was solved and the romancing and happily ever after was very sweet. In a nutshell, very readable or 'listenable' to and I definitely recommend it. I listened to the audiobook version and my unbiased review above is given voluntarily.

A little twist to this historical romance, we meet Betsy, homeless and unemployed. After going to church to pray for help, she finds herself now the companion to Wilma who is traveling to see her grandson Noah. Not only is this a miracle for Betsy, but this match is integral to our story. Wilma is a spunky woman, and while older and in need of some assistance, I love her sage advice and grandmotherly way with Betsy. Having Noah as her grandson is just icing on the cake! Noah and Betsy's first encounter is rocky, but will they find a common ground? These two have sparks that ignite, but we can only hope they turn passionate! Betsy's journey to find out about her family is not only eye opening, but has elements of surprise We meet all kinds of people, root for the good, set the bad to rights and enjoy Betsy. Narrated by Lili Dubuque, we get the best of all these characters, from the grandmothers to the outlaws. She paces the story well and I really enjoyed her voices. Full of action, family conversations and growing love, we get a little of everything through her performance.

The Secret Diary by Barbara Goss

Oh my.. surely Barbara knows how to make sweet novels that will make you fall in love with the characters. I love the story and the inspiration it brings and how one of the characters found his way back to God. A five star Christian romance!

This was an interesting story! A young orphaned woman is up for a few changes in her life and she gets more than she’s bargained for. I wasn’t as fond of the narrator though. I had a hard time distinguishing who was talking and all the characters seemed to have the same cadence to their voices. I’ve been enjoying this whole series and look forward to reading or listening to more. I received a free copy of this audiobook and this review is my honest opinion.

This book slowly reveals the multi-dimensional storyline and the secrets from generations past and present. When you meet each character they seem to have a rigid personality, but with meeting other characters and situations they show more in-depth parts of their true personalities. The story starts off a bit uneventful, but as each person opens up the more intriguing, feisty and truly inspirational. The faith in the Almighty to get them through the most worrisome times comes to life. That's one major component of this story that I loved and found refreshing is that religion, prayer, and faith that things will turn out how they're supposed to be the highlight of the book. GREAT READ and FANTASTIC BOOK FOR PEOPLE LOOKING FOR INSPIRATIONAL BOOKS!!!!! Check out the authors other fantastic, inspirational books. They open skeptical readers minds up to the power of faith, prayer and unconditional love!!!!!!!

The Secret Diary: Lockets and Lace, Book Thirteen was another great read by Barbara Goss. Betsy has never known her family and finds out that her father and brother may be criminals. Noah, the sheriff, wants to find out and arrest them if they are. Betsy finds her mother's diary and can't believe what she's found. I loved listening to Noah and Betsy's story and can't wait to read more by Barbara Goss.

I got this ARC via audiobook boom and this is my voluntary review. Ms. Goss has made another great addition to her stories. I am not used to her main characters disliking each other from the beginning so this was a surprise. I am not fond of the enemies to lovers stories but this one lead me on a merry chase and the main characters sought to find HEA, I love the narrator. She brought the story to life. So glad that her brother turned out to be good. She has thought she was alone in this world and then to find family and lose them would have been tragic. I am glad that these stories don't go down that rabbit hole. It is also good to have a clean romance suspense story that has God as the center.

It’s a small world and it’s amazing how things have a way of working out. Betsey grew up in an orphanage, not knowing anything about her family. When she’s given a locket that was once owned by her mother, the story of her family begins to unravel. Barbara Goss has such a way of drawing you into her stories. You can’t help but fall in love with the characters. It warms my heart to listen/read her books. Lili Dubuque delivered a wonderful performance. She really brought the story to life. I was given this free review copy audiobook at my request and I have voluntarily left this review.

I listened to the audio version of this book. Yet another great historical romance by Barbara Goss. She really manages to make her characters pop while keeping them true to the time period. This book was rich with the heroines desire to learn about a family she had never known in order to learn more about herself. Not everything Betsy discovers is to her liking. Noah is a terrific western hero--strong in his beliefs and the desire to protect his town from those who do evil. Although he didn't like Betsy at first, he was fair in his judgment as the book progressed. The book had romance, beliefs, family and the battle between good and evil. I absolutely loved the voice of Lili Dubuque for this audio. The softness of her voice and the tempo seemed perfect for this story. I was given a complimentary copy of this audio book. All thoughts are my own.

Something good comes out of something bad

Betsy Wheeler believes that life couldn’t get worse...she grew up in an orphanage and then her fiancé runs off with another woman days before their wedding. Then she gets evicted from her apartment! However, Betsy has her faith and she goes to church and asks her pastor to pray with her. Wouldn’t you know, the pastor’s mother-in-law is traveling back to her home and needs a companion. When Betsy and Wilma arrive at home, Wilma’s grandson, Noah, is suspicious of Betsy’s motives and isn’t very nice. Over time, Noah is proven wrong and he and Betsy become friends but there are some bad guys who are out to get revenge on Noah. Will Noah survive to have an HEA with Betsy? Sweet story of faith and trust with a beautiful ending. I voluntarily accepted a complimentary copy of this book in exchange for an honest review.

This is another great book by Barbara Goss. It draws you in from the beginning and leads you to a mystery that you think you solved...but no! Plot twist and then yep...another plot twist. In the end you are asking for more and looking forward to a continuation of the excellent story.

A young woman on a journey to find out more about her parents who left her at an orphanage. This journey will take her on paths unexpected, dangerous and finding love. Sometimes family is more than a bloodline. I received a complimentary audio and this review is voluntary.