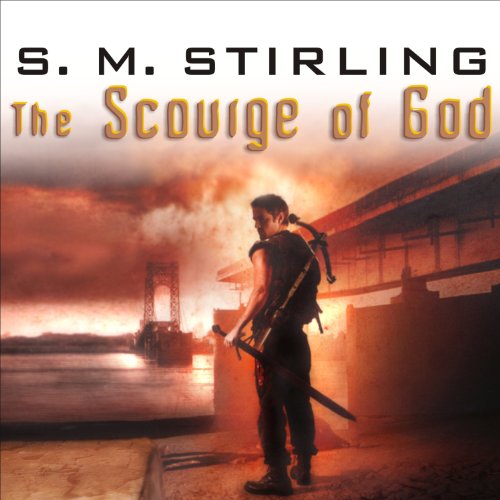 The Scourge of God

The Scourge of God

Rudi MacKenzie continues his trek across the land that was once the United States of America. His destination: Nantucket, where he hopes to learn the truth behind the Change that rendered technology across the globe inoperable.

During his travels, Rudi forges ties with new allies in the continuing war against the Prophet, who teaches his followers that God has punished humanity by destroying technological civilization. And one fanatical officer in the Sword of the Prophet has been dispatched on a mission: to stop Rudi from reaching his destination by any means necessary.

"Stirling...eloquently describes a devastated, mystical world that will appeal to fans of traditional fantasy as well as post-apocalyptic SF." ( Pubilshers Weekly)

I just finished listening to this book today. For the past month or so I have been listening to the series and, as usual, was disappointed to reach the end. The characters are easy to like or hate. There is plenty of action in all the books and this is no exception. I recommend that you not read the books out of sequence.
I don't want to write more because I might give hints about the plot and how it develops. So I will end by saying If you enjoy RR Martin's and Robert Jordan's books you cannot go wrong with this series.

A superb story by a superb author

I read the Island in the Sea of Time trilogy and loved it. I was delighted when my son found Dies the Fire (first in this series) and gave it to me as a surprise birthday present. If anything the Dies the Fire series is even better than the Island series. Both have superbly developed characters, strong story lines, and are very captivating. Each year since the first I've devoured each new book in the series in a day or three, and then wait impatiently for the next one to come along.

The Audible treatment is, IMHO, also superb. I found the narrator to be better than most others on most audio books, and he does a very good job with voice changes, inflection, and accents - even doing a creditable job for the women.

I would highly recommend the series - both hard copy and Audible version to anyone who has imagination, enjoys strong characters, the struggle between good and evil (there are a few VERY evil ones in here!), and an epic adventure that stands with the very best in modern storytelling.

A bit better than The Sunrise Lands

but still jolted by Mr. McLaren's mispronounciations. How about sluff for slough and rimpoch for rimpoche? Oh, and folks are still barring their teeth.

Would you listen to The Scourge of God again? Why?

Perhaps, there is a great deal of detail to absorb in one listening.

Love the strong female characters, but Rudy is the star of this book

Who would you have cast as narrator instead of Todd McLaren?

McLaren does a fine job until he comes to a place name such as Umatilla which any local could tell you is pronounced you- ma -till - a and murders the name by calling it um - ma -tee -a Good Grief!!! He also murders Palouse. It is understandable that he did not know these names, but I do not understand why he didn't ask. In the last 2 books, he did get more of the names right than in the first books.

I likes the Sioux camp and the monastery is quite interesting. Battles are a bit to graphic for my taste, but it was probably necessary to describe them in detail.

I loved the Dies the fire Trilogy and am reading the Island in the Sea of Time. Great writing and attention to detail about how people would really survive when technology fails. Great characters, action and struggle against good and evil.

I love this series. Start with "Dies the Fire". I agree -- if you like Jordan or Martin, you'll like this.

Honestly, the story is getting repetitive. Too many too similar fight scenes using too many of the same descriptive phrases. I'm ready to give it one more volume, but if it ends up being fight scene filler to stretch a short story into a novel for pecuniary reasons -- I'll just look up some summaries to find out how the whole thing ends, and move on.

Love the story - not for audio

I really love this series. For some reason, the pacing of this did not keep my attention for audio.

I really liked the premise of the modern quest with these great characters but I just can't help feeling like this book is dull. Maybe it's the authors obsessive need to name everything accurately. Do I really need a complete breakdown of their meals? Do I really need to know the names of all the local flora and fauna? This whole book just felt like a drag on the overall plot.

I did get a kick out of how he used madam blavatsky's religion as the religion of the evil doers though. He had to do a little research into that craziness, which is comendable.

Actually started this series from 'Dies' I love the concept of the story and felt a link with 'Lord Bear/Mike Havel' being a Marine, having actually read the first book (which took close to a year, sorry I'm a busy guy) I continuded with the series yet only made it 3/4 through 'The Protector's War' but the only reason to keep me following the story was the characters, although I have not read any of the following books, I have listened to the complete story, yet there are times I want to yell at S.M. that we know the characters by now and I don't care about the goddamn food, "'By Christ, Jesus' to quote Mike Havel" you can tell a helluva story man, ya don't need to describe every flavor on the table or the history of every character as they reappear in the story (even multiple times)!
As I stated before, I'm a busy man and I listen to books while I work (hard to turn a wrench while holding a book) and I prefer the longer books, but when it has came down to the last few Stirling books, I only wish there was an abridged version.
It's a kick-ass story and I want to see it to the end, but :!