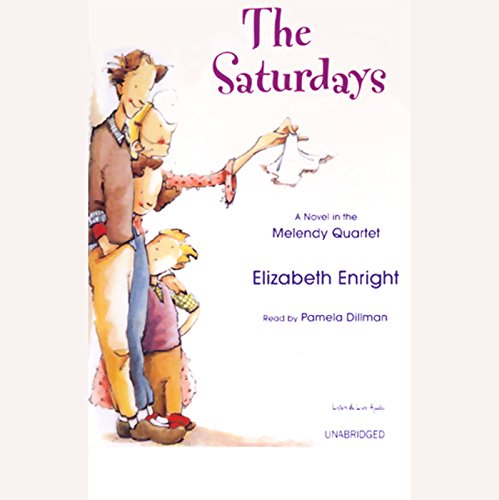 By: Elizabeth Enright
Narrated by: Pamela Dillman
Try for £0.00

The four Melendy children live with their father and Cuffy, their beloved housekeeper, in a worn but comfortable brownstone in New York City. There's thirteen-year-old Mona, who has decided to become an actress; twelve-year-old mischievous Rush; ten-year-old Randy who loves to dance and paint; and thoughtful Oliver, who is just six-years-old.

Tired of wasting Saturdays doing nothing but wishing for larger allowances, the four Melendys jump at Randy's idea to start the Independent Saturday Afternoon Adventure Club (I.S.A.A.C.). If they pool their resources and take turns spending the whole amount, they can each have at least one memorable Saturday afternoon of their own. Before long, I.S.A.A.C. is in operation and every Saturday is definitely one to remember.

Written more than half a century ago, The Saturdays unfolds with all the ripe details of a specific place and period but remains a winning, timeless tale.

"Enright has a quick eye for the unexpected, the amusing, and the beautiful in what might be just ordinary experiences." ( The New York Times)

What listeners say about The Saturdays

Review by my 5 year old

The lighthouse part was so cool. I don't quite remember it. Mrs. Elefant was my favorite character.

boring and somewhat repetitive. takes ages to start to become interesting.
I wouldn't recommend it

Excellent for children and adults

My family and I loved this book. I have a 10 year old son and a six year old daughter. We listen to audiobooks in the car, and some of them make us want to keep driving--this was one of them. It captivated both of my children with the humorous adventures of the Melendy children. We will download the next one in the series immediately!

Excellent for all ages!

Our whole family (kids 6 & 8) enjoyed this! It made travelling fun! (better than videos) Highly recommend - wish all the Melendy stories were available.

Great for All Ages

I struggle to find audio books that will appeal to all 3 of my kids aged 4 to 11 . Somehow the adventures of the Melendy children fit the bill and they have entertained us through several long drives. The stories are timeless, and I love the positive view of family they present. Here is a family that respects differences, makes up after quarrels and remains tightly bonded. Try out this first one and you may be hooked!

What a delight to have these books to listen to, for both children and adults! Enright is a skilled, observent writer and her characters are REAL --nevermind that she wrote these books more than 60 years ago, the children are just as engaging and relevent today. The Melendys have varied interests and are great sibling role models without being unnatural. If you want a family story that everyone will enjoy, this series is a great place to start. (My only reserve is the "foreward" is a bit dull for those who don't yet know the books, and should really be an "afterword".)

Siblings who are kind to eachother!

It's so nice to hear a story that has a family who acts like they genuinely like eachother. This has adventures that are not over the too but still wonderfully thrilling. My children are 7, 8 & 12 and all enjoyed this books and cannot wait for the next.

My kids and I enjoyed the book. We used it for drive time and laughed.

Kids listened to this during breakfast. A great way to start the day. Kids thought it was funny. I really enjoyed the narrator's many voices.

I loved the story! It kept me exited all the time! The characters were crazy and funny.

The best ever. totally perfect! my kids love all the books in this series. I wish there were more.

This first book about the Melendy family is so fun! We found the rest of the series at the library, but this one wasn't available. We were thrilled to find it here at audible.com! This series is full of adventure for kids, and wholesome and very well written! Ms. Enright is a wordsmith, so listening is enjoyable, even for mom and dad! But my favorite thing about these books is that the Melendy children love each other. What a wonderful model for my own 4 kids, who imagine themselves right in the middle of the Melendy's adventures! It's hard to find books that demonstrate POSITIVE family relationships, so this one was a fabulous find!