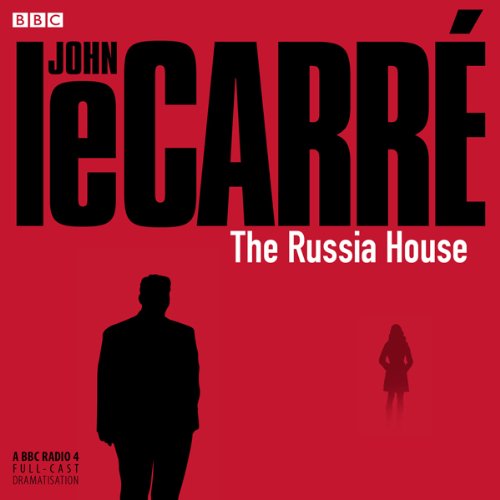 Tom Baker stars in this BBC Radio 4 full-cast dramatisation of John le Carré’s powerful thriller. In the third year of perestroika, London publisher Barley Blair is sent a manuscript from Moscow. Exposing Russian nuclear threats as a sham, the information - if it’s genuine - could shatter East-West relations. Jazz-loving, hard-drinking Blair is hardly the spymasters’ idea of the perfect agent, yet they are forced to send him to Moscow to make contact. But the Cold War thaws when Barley meets Katya, the beautiful Russian intermediary who is equally sceptical of state ideology. Mere pawns in a deadly game of international espionage, they nevertheless represent the breakdown of hostilities and a future which poses a huge threat to the entrenched professionals on both sides... Both a gripping spy saga and a poignant love story, The Russia House delivers all the excitement and tension expected from the master of espionage fiction. This BBC Radio 4 adaptation was dramatised by René Basilico.

What listeners say about The Russia House (Dramatized)

I have to say that this adaptation is a must for those who have enjoyed BBC Radio 4's recent "The complete Smiley". Tom Baker is utterly magnificent as Barley, a larger than life character. It is one of those dramatisations you find yourself listening to from start to finish in one sitting.

It's a tough call to be compared against the original novel - one of le Carre's finest in my opinion - and the near perfect Connery screen version. This three hour radio version is at times sublime at others, painfully careless. It's strange that the film version is half the length but manages to encapsulate the original far more effectively that this version. I suspect the whole cast knew the film version well and struggled to escape emulating it. In some ways this was a plus. Baker is wonderful. But I listened to him and saw Connery. I think his best ever role. The Walter scenes, especially the final one are confusing. It's all a little out of kilter. Bad editing at the last moment I suspect. However, overall not a bad way to spend three hours or so in the company of Le Carre's wonderful imagination and vision.

ahh.. Carre and Baker at their best

I thought the Sean Connery filmed version of this story was great, but Tom Baker manages to top it. He's got precisely the right devil-may-care attitude for the Barley Blair character, which so frustrates the CIA in their dealings with him. An excellent dramatisation by all the actors involved, and thoroughly enjoyable.

i wanted to listen to this in one hour chunks whilst on morning walks during Covid lockdown. Ended up having to listen to the end in one hit. Gone through all the J le C's, now on to Chandler.

As always with Le Carré, a great listen

Tom Baker held this together with his usual reviewer a performance. The adaptation feels a little dated (goes back to 1994) and with the exception of Katya, the female roles are almost laughably secondary.

One major frustration is that the credits to the BBC production has been removed. It’s a disservice to the actors that they are not properly credited for the work that they do.

I have not seen the film version, but I enjoyed listening to this BBC dramatisation. Tom Baker delivers a brilliant performance as the flawed Barley. Carre writes and explores the weaknesses of the human nature - love, betrayal, and duplicity. I find the drama of personal relationships between the characters fascinating, along with the involvement of the secret services.
Again with Carre, we are left wondering...

Can not quite put my finger on why this one does not appeal to me nor capture my attention in the same way all my other le Carre’s in the collection do. Something different about the main characters did not appeal nor feel any empathy. Quite left me feeling out in the cold. I hope that I will want to re listen to this when the mood takes me and maybe feel different. I have all the other le Carre’s in this collection and have enjoyed them all so much that I have eagerly purchased the next one and re listened to them all.

Le Carre at his best

What did you like most about The Russia House (Dramatized)?

Although heavily abridged from the book the plot line went very well. I love a John Le Carre novel whatever the format

well acted, but something lacking in the story

In the other Le Carre books I've read/listened to (Smiley trilogy, Perfect Spy) there was something astonishing about the structure of the story and the intricacies of the betrayals involved. In comparison, this seemed slight. I liked the character of Barley Blair but I didn't really believe in the love story and I kept waiting for something else to happen.

Just Boring - Will Put You to Sleep

Attention to the actual story. Interesting dialogue. Making an effort to connect the main characters with the listener. Providing the basics of storytelling such as a story arc, climax, etc. I am a huge fan of "The Spy Who Came in From the Cold" which I thought was done very well, but this production of "The Russia House" was very sloppily done as far as adapting le Carre's work to radio drama. The acting was fine - no real problems there. What made it poor was that the interesting elements of the story have been completely lost through a monotonous and lack luster adaptation, which is the fault of the writers. Completely monotonous and dull.

Would you be willing to try another one of Tom Baker’s performances?

No, not based on this production.

Disappointment. This purchase was a complete waste of money. I am normally a big fan of John le Carre's work. I thoroughly enjoyed the dramatisation of "The Spy Who Came in From the Cold". However, in this production the writers seemed to completely miss the point of the story. There was no suspense, no strong connection made to the main characters, no music or emphasis on certain plot points to delineate an interesting story worth listening to. It was basically three hours of people talking with no climax or interesting events.

As a Le Carre fan I've exhausted Audible's selection of his books. So I turned to the dramatised production of Russia House in hopes of getting more. I have ot say it's a bit of a letdown, with a lot of over-acting and irritating sound effects that I found distracting. Although Russia House was made into a pretty bad movie (starring Sean Connery), some of Le Carre's books have been successfully adapted to film and television (Smiley's People with Alec Guinness is simply superb). It's not an impossible task to capture Le Carre's distinctive prose style and nuanced characters in a medium other than the printed word. This dramatised version of Russia House falls far short of excellence. I hope that Audible will add the book to its offerings at some point.

This is an excellent traumatize Asian of the novel. Running time is three hours which is great for a car drive, bike ride etc. Very high-quality.

Dr. Who as Spy boozes up dynamite as small press publisher

Not one of Le Carre's masterpieces but this lesser story is well done in an audio adaptation feature Dr. Who's Tom Baker playing Barley Blair a drunken small time publisher and big time failure who finds love and purpose being a reluctant spy.

Ordered the abridged play version by mistake. Wanted the book. I had trouble paying attention to the play version.