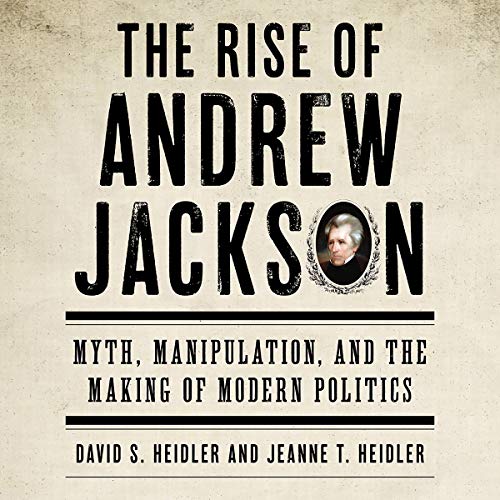 The Rise of Andrew Jackson

The Rise of Andrew Jackson

The story of Andrew Jackson's improbable ascent to the White House, centered on the handlers and propagandists who made it possible.

Andrew Jackson was volatile and prone to violence, and well into his 40s, his sole claim on the public's affections derived from his victory in a 30-minute battle at New Orleans in early 1815. Yet those in his immediate circle believed he was a great man who should be president of the United States.

Jackson's election in 1828 is usually viewed as a result of the expansion of democracy. Historians David and Jeanne Heidler argue that he actually owed his victory to his closest supporters, who wrote hagiographies of him, founded newspapers to savage his enemies, and built a political network that was always on message. In transforming a difficult man into a paragon of republican virtue, the Jacksonites exploded the old order and created a mode of electioneering that has been mimicked ever since.

"Many thoughtful citizens feared that Andrew Jackson's election in 1828 spelled the death of the Republic, and this book shows why. Written with verve and conviction, it shows how Jackson's handlers first mastered the trick of packaging a volatile character with a checkered history into an irresistible presidential candidate. In The Rise of Andrew Jackson, David and Jeanne Heidler have given us both an eye-popping story and a sober lesson for our time." (Daniel Feller, University of Tennessee, editor of The Papers of Andrew Jacksonspan)

"Vividly written, The Rise of Andrew Jackson unpacks Old Hickory's climb to the White House only to find savvy spinmeisters and shrewd political operatives managing him all the way, often straining to control his legendary temper. In providing this misunderstood part of Jackson's story, the Heidlers paint a fascinating portrait of the bare-knuckles politics of the 1820s, one that resonates today." (David O. Stewart, author of The Summer of 1787)

"Two of my favorite historians, David and Jeanne Heidler, here explain how a determined band of Andrew Jackson's supporters made him President of the United States, and in the process permanently transformed American politics. The story they tell - carefully researched, cleverly constructed, full of ironies and surprises - is poised to become the definitive account of a still controversial electoral campaign." (Daniel Walker Howe, Pulitzer Prize-winning author of What Hath God Wrought: The Transformation of America, 1815-1848)

I listened to this shortly after completing Meacham's Jackson biography. I am not some kind of expert in the antebellum age, but the Meacham biography left me interested in something more about Jackson, and this looked good. The title is a good reflection on the subject, which is primarily Jackson's political junto (for lack of better term). The title and write up make it seem a bit more scandalous than the substance supports, at least from our modern perspective. But perhaps that's the point of the subtitle "...the Making of Modern Politics."

The authors are skeptical of Jackson, but do eventually give him some due. It's just as much a manipulation to refer to the battle of New Orleans as a 30 minute ordeal as to suppose that his having succeeded there implied his qualification for the presidency. Fortunately, such transparent overstatements fade after the opening of the book. For anyone more interested in either the times or Jackson, this is a good read/listen, but I wouldn't see it as a primary biography or anything of that sort.

A couple of cautions. (1) The first chapter or two are bouncy in time and topic and a bit harder to follow than I expected...but this gets easier. (2) The narrator has really excellent enunciation, but has a tendency to bounce back between the affectation of an actress reading copy for a television commercial and the more dry tones of the lady talking from my iPhone. Fortunately, this too gets more even and better after the first chapter or two.

I'd be happy to read/listen to anything written by these guys that grabbed my attention or from this reader.