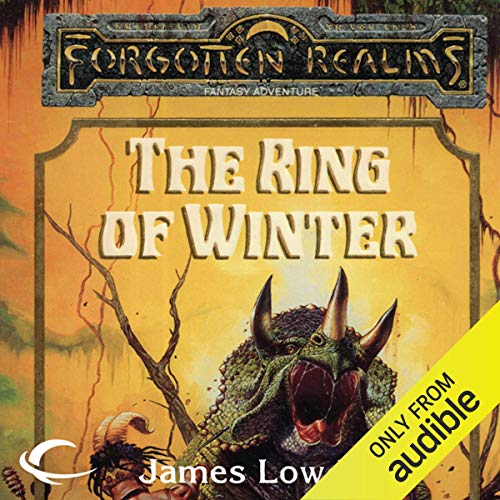 The Ring of Winter

By: James Lowder
Narrated by: Marty Moran
Try for £0.00

One of the Harpers (a secret organization fighting for good) searches the jungle for a missing explorer and happens on a lost civilization--complete with dinosaurs--and the evil Cult of Frost, which tries to steal his magic ring.
©1992 TSR, Inc. (P)2013 Audible, Inc.
Action & Adventure Dragons & Mythical Creatures Epic
Show More Show Less

What listeners say about The Ring of Winter

To start, if you are looking to use this as a direct lore source for Tomb of Annihilation, you should be mindful that there are some inconsistencies and to prepare and adjust accordingly. That being said if you're looking to directly connect or just change the connecting lines it's totally possible for the clever DM.

The story is a pleasant and easy read in the written form and I don't really have much negative to say about the author's work on the physical book. it reads like a true adventure and it very easily sucks you into rhe world and land of Chult. Most every setting was able to be pictured in vivid description, and the characters and plot had a satisfying blend of seriousness and comedic relief.

That all being said, this next part will dissolve into a near rant as it nearly ruined the entire experience. The vocal narrator was awful and clearly here just for a paycheck. It started off as acceptable aside from a blatant mispronunciation of the MAIN CHARACTER'S name (the C sounds like Simber, not Kimber, 8 second google search,) but as the action and tone built up the narrator... didn't. The vocal inflections rarely changed, and when they did it was wildly disconnected from the written tone. Combat scenarios were narrated like a children's book, serious and somber moments were nearly ruined or glossed over by whimsical tonal apathy, and character voices did not match character depictions aside from a few exceptions (Why in Moradin's name does the dwarf sound like a christmas elf?) I wanted so badly to give this book all stars, but this narration was borderline unacceptable and caused me to zone out or get bored and close the app on numerous occasions. I should not have to redo the narrations in my head to match the tone, correct pronunciation, and scene.

TL;DR: This Audible purchase was of a well written, charming, and insightful adventure that was near ruined by an apathetic, out of touch narrator who was clearly just there to cash a paycheck. Buy the paperback or strap in for a rough ride.

if only the narrator was better..:(

Have you ever done an audible and had to repeat nearly every sentence again but with the RIGHT inflections? This is a fun adventure with tons of great moments all undone by the narrator's "kids book" style read.

Happy to redo it! XD

Ideas for Tomb of Annihilation

This book was a fun little listen that I got to help out with ideas for the campaign I’m running. There are a lot of differences with what the campaign’s Chult and this one, but there are plenty of great ideas for source material, descriptions of the jungle, and interactions with things and peoples of Chult.

If you are planning to read listen to this in preparation for ToA I would say don't bother. the story has limited connections to the campaign. Also I think there are some lore differences, WoC must have done some rewritten of Chult when they made it.
In regards to the story it was ok but not great. The narrative was really a let down though. The voices all sounded about the same and not very well read.

Though this book is nothing remarkable, it is highly entertaining and the very definition of the word "Adventure." This is not a story one needs to experience more than once, but that one time a reader/listener will struggle not to smile at every minour or major event. This story is not incredible or life-changing. No. What this story is, is endless, simple FUN. So if you feel like just being happy while being told a story, this is the perfect place to find it.

This book is better the second time arround.
Not a lot of novels exist that bring the chultan setting to life. This one does a good job at explaining the ntative religion and the holy city of Mezro. The narration is very good and its an okay action adventure story featuring some dinosaurs but mostly goblins.
My favorite scene was when the protagonist goes to meet the big bad evil guy of the setting and visits his pallace.