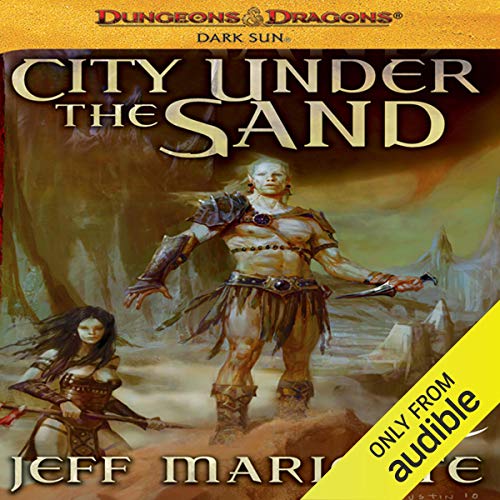 City Under the Sand

City Under the Sand

Aric, a half-elf with a rare natural ability with the psionic discipline known as "the Way", must find his place in a world ruled by the tyranny of evil sorcerer kings, and dominated by the savage wilds of the Athasian desert, a world presided over by the unrelenting crimson eye of Dark Sun.

When Aric is brought into a quest to search for a priceless trove of weapons, he would rather keep his head down and live a simple life. But nothing is simple in the city of Nibenay with its reclusive ruler known as the Shadow King. And in a world where metal is the rarest of commodities, Aric’s "way" with metal is an even rarer talent.

Enlisted by the Shadow King himself to seek out this cache of metal weaponry, Aric heads into the desert with a treacherous band of adventurers. Allegiances are tested and secrets are uncovered. But sometimes the secrets hidden by the sands of time should remain undiscovered. When Aric and his band uncover an evil perhaps greater than the Shadow King himself, it is a race against time to see who will harness its power.

loved it. if you are new to the dark sun of D&D this is the perfect start to get to know this campaign setting its basically a mad max suvmersion of dungeons an dragons. metals are few, rare and hard to find. magic practitioner are scarced to come along and death awaits in every corner of what seems to be a dessert world. in_joy!

Close to the Dark Sun, I remember.

I always liked the way Dark Sun adventures seamed to play out in 2nd. Edit. but in a campaign setting that uses 4D4+4 for ability scores instead of 3D6 like every other campaign setting. Monsters take on a far darker tone