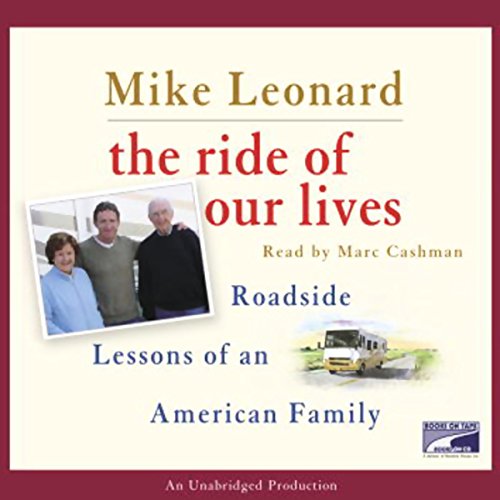 The Ride of Our Lives

Mike Leonard is a lucky man. It’s not everyone who gets parents like Jack and Marge. At 87, Jack is a pathological optimist with an inexhaustible gift of gab. Marge, Jack’s bride of 60 years, though cut from the same rough bolt of Irish immigrant cloth, is his polar opposite - pessimistic and proud of it. What was their son, Mike, thinking when he took a sabbatical from his job with NBC News so he could pile these two world-class originals along with three of his grown kids and a daughter-in-law into a pair of rented RVs and hit the road for a month?

Mike was thinking that he wanted to give his parents the ultimate family reunion. And so, one February morning, three generations of Leonards set out on their journey under the dazzling Arizona sky. Thirty minutes later, one of the humongous recreational vehicles has an unplanned meeting with a concrete island at a convenience store. Thus begins the adventure of a lifetime - and an absolute gem of a book.

In the course of their humorous, often poignant cross-country tour, from the desert Southwest to the New England coastline, the Leonards reminisce about their loves, their losses, and their rich and heartwarming (and sometimes heartbreaking) lives, while encountering a veritable Greek chorus of roadside characters along the way. The home stretch finds the clan racing back to Chicago, hoping to catch the arrival of the next generation, Jack and Marge’s first great-grandchild. Through it all, Mike pieces together a century of family lore and lunacy - and discovers surprising sides to his parents that allow him to see them in a whole new light.

Mike Leonard has captivated millions of television viewers with his wry and witty feature stories for NBC’s Today. Now he brings that same engaging charm and keen insight to the foibles and passions of his own blessedly unique family. By turns uproariously funny and deeply moving, The Ride of Our Lives delivers a lifetime of laughs, lessons, and priceless memories.

“Mike Leonard is a national treasure and his touching, hilarious, instructive account of a loving road trip with his parents and children should be required reading in every family. I’m sending it to all my children so they can share the laughs and the tears.” (Tom Brokaw, author of The Greatest Generation)

“Mike Leonard has generously invited the rest of us along for a ride aboard his land yacht, the S.S. Fiasco. And what a ride it is. Profound and profoundly funny, Leonard takes us on a journey deep into the heart of his family. He has been blessed with characters who are as bizarre, maddening, unpredictable and hilarious as any dreamt up by Hollywood - and they are his real-life parents! The Ride of Our Lives reads like intimate dispatches from your funniest friend, and is as touching and whimsical as a series of home movies unspooling from an American childhood.” (Amy Dickinson, syndicated advice columnist, "Ask Amy")

What listeners say about The Ride of Our Lives

There is good news and bad news about this book! The good news is that it was one of the most entertaining I have read (listened to) in years! The bad news is that I searched all over the internet, but ths author doesn't have any other audiobooks! It was entertaining on so many levels and I could literally picture taking a road trip with my whole extended family while listening to this story! I don't often laugh out loud, but I did several times while listening to this one!

My teenage daughter and I listened twice!

The characters in this book have become a household names. Great story, skillfully told, lovely and laughable. Perfect road trip story for our family.

I highly enjoyed this book. The author is in his middle aged years soon to become a grandparent. His kids are all adults and his elderly parents are in a bit of a rough patch in their lives, so he decides to rent 2 RVs and hit the road for a final tour of some of the places his parents have always wanted to go, or go back to revisit. He brings some of his adult kids with him and they make many stops throughout the country. His parents are a real Hoot, especially his mom, who pretty much says what she thinks all the time. Filled with humor, but with a touch of melancholy, this turns into more than just a vacation.

Oh How Human We Are

Well, he certainly described his family well, expecially his parents. I hope they did not mind their descriptions.

I found the book to be fun. In fact, I have listened to it twice - something I seldom do - and found that I laughed even more the second time.

Great story telling! You’ll laugh(mostly)cry a little and think about your own life. So worth it.

One of the best books on the afterlife out there...really well written. Keep em coming Bob

Funny, charming and entertaining. You can't help but laugh out loud! I totally fell in love with this family :-)

Tired of it early

Being an RV-er, I was looking for more RV and less dialog between family members; hence, my reaction to this book was moderated by my own personal desires, so I tired of it here and there and was glad to move on to something else.

I appear to be in the minority, but I just could not get into this book. The dialog and prose were pretty corny. Some of the anecdotes were ok, but many seemed forced and somewhat unbelievable. Often, it felt like the author was just trying to think up ways to talk about himself. I only made it about halfway through the book, so I don't know what happens later, but the only "camping" they were doing seemed to be in parking lots. It just wasn't that interesting to me.

I really enjoyed listening to this book. The narrator did a fine job. The story is so heart-warming. I am usually a suspense/mystery book fan, but it was to listen to a "feel good" book for a change.