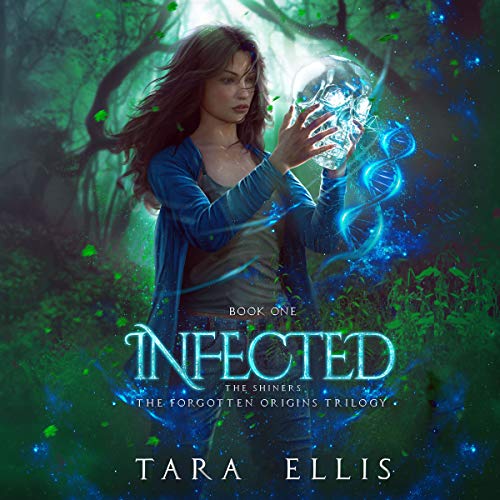 An alien plague. A sixteen-year-old girl. A fight to save the world.

When a rare meteor shower unleashes a mind-altering infection, the people Alex loves begin to change. They’re smarter, faster, emotionless, and they have a plan. One that doesn’t include her.

Guided by cryptic clues left behind by her deceased father, Alex follows a trail of increasingly shocking discoveries. Earth’s history isn’t what she learned in school, and a new hive mind threatens to rewrite the future.

Alex is a fighter, but pursued by both friends and an unknown enemy, it will take everything she has to fulfill her destiny. Desperate to save her little brother, she flees to the mountains surrounding her home, where the only chance for humanity has lain hidden for thousands of years.

Infected, The Shiners is book one in the Forgotten Origins Trilogy (Formerly titled Bloodline)

Cool story with a great characters

This starts really well with a meteor shower leading to a roller coaster adventure for Alex. Alex and her compatriots on this thrilling twist filled ride are all really well written and solid characters. The story moves at a good pace revealing new information and plot twists as it goes. Really enjoyable! I listened to it in just over one sitting thanks to a long journey and to be honest I would have loved an excuse to drive a bit further and listen to it all. It's really easy to get into. The narrator is the author and does a great job of getting you into the book. I really enjoyed the narration, which is a skill in itself, so really great job!!

Enter a Future of mystery and suspense.

A well crafted story with good Narration by the Author is an entertaining read for people of all ages.

The story contains all the elements of a good story.

If you enjoy Science Fiction mixed with interesting characters and suspense you will enjoy this Audio performance.

Alex father was all about astrology. He talked about the huge meteor shower that would be happening before his untimely death. Prepared, sitting a great location Alex, her mom and little brother watch the meteors. Everything is great until the meteors get too close and the earth shakes. They flee to the car when things get bad but things only get worse from there. Her mother is infected with some type of virus that leaves her different and not in a good way. Alex father left her clues and she follows them on an adventure that reveals things aren't as they appear.

The author developed an airtight plot and the story has a smooth flow. The action and suspense builds but never stops until the end. The characters are developed well which makes the story a true investment. I got to know the characters and cringed and loved then couldn't stand some. Alex is consistent and has the best intentions as she plows forward attempting to save her brother and the world.

This is a really fun read!

Intriguing story line and easy to listen to

Would you listen to Bloodline again? Why?

Yes, the story draws you in. It's fun to listen to mysteries again to see the story unfold knowing what the end will be. Also, Tara's voice is very easy to understand and listen to. I've listened to many audio books, and there are times when the tone of the voice is too low, or inflections are in strange places that I believe distract from the telling of the story. Tara is every bit as good as some of the paid actors who narrate for audio.

What does Tara Ellis bring to the story that you wouldn’t experience if you just read the book?

I think it is interesting hearing the author read their own stories (as long as they are talented enough to do so:)), because you experience the characters exactly how they had envisioned them. They created them, and now they are able to bring them even more to life.

My husband stayed up late and finished this book in 2 nights! He never does that. He was completely drawn in to the exciting plot. We are looking forward to listening to more from Tara Ellis.

Now for the obligatory: "I was given this free review copy audiobook at my request and have voluntarily left this review."

An alien plague...
A sixteen-year-old girl...
A fight to save the world...

Such a wonderful read! I had an enjoyable time listening to this book. Absolutely wonderful.

Note: I am a voice actor, and frequently listen to audiobooks both for entertainment and educational purposes.

Story: I enjoyed the story, Ms. Ellis has written a “Dan Brown-lite” style novel, which entwines current times with mystical ancient civilizations. The female protagonist definitely works as a teenager frequently spinning back and forth between doubt and elation, and the two other primary characters are solid role players. Ultimately, I would have liked to see the characters developed a little deeper (perhaps this will happen in the rest of the trilogy), and a little more depth of explanation into the ancient mysteries. But overall the story was complete, easy to read, and fun.

Performance: It’s a tricky road for an author to voice their own book, but in this case Ms. Ellis does quite a nice job. She has the benefit of both a pleasant voice that is appropriate for the protagonist (the book is written in first person) and the keenest insight as to the character’s motivation (she was the author after all), and this is an excellent combination. Her voicing is believeable and easy to listen to.

I look forward to book 2.

decent twist on other myths.

I got a copy of this for free in audiobook form in exchange for an honest review.

It was an interesting new take on some existing myths and ideals.
Had some odd and corny moments but held my interest through the whole book.
I did like it and the narrating was good.
I'm curious to see where the story goes from here.
I DID like that the book ended with some closure on some things. I was worried that it would leave me hanging and it didn't.

the kind of world that will swoop you with the story a very mysterious and good story I loved it very much a great performance from the director as well
I was given this free review copy audiobook at my request and have voluntarily left this review.

Fast paced overall book about Alex dealing with a plague that ends up effecting many people that she cares for. Now it is up to her, her dad’s clues, and a friend to hopefully find the cure before those infected decide to do awful things to those that weren’t affected. Will she get the cure? Will it actually save everyone? Thought it was great the author actually narrated her own book she did a great job.

Pretty good if you want a casual listen

I enjoyed the premise of this book and thought that overall it was a decently entertaining listen. I'd say the characters and story felt a little thin and it sort of felt like I was along for the ride and not immersed in the story. It took a little extra suspension of disbelief and a couple parts just didn't seem to fit my impression of the characters. There were a couple distracting "God wouldn't do this or that" parts that really felt out of place and seemed to come out of nowhere. With that said, if the publisher's summary intrigues you then I would definitely consider this book, especially if you are looking for a "distracted listening" book to casually listen to while doing some other tasks. It didn't feel too deep and it could easily keep you entertained while multi-tasking.

Narration (by the author) was pretty great! I can imagine doing both the writing and narrating is not an easy task and I felt like Tara Ellis did a great job here. The narration was pleasant and did not worsen my impression or interest in the story.