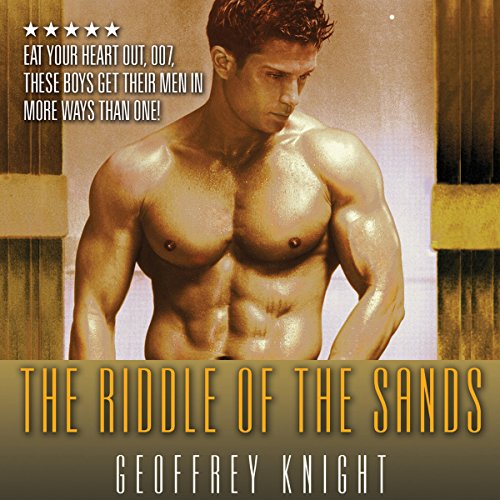 Hot gay tomb raiders! Blackmailed by Jake's nemesis - the vengeful Pierre Perron - Professor Fathom's team of gay adventure-hunters is sent on a seemingly impossible mission. Will they uncover the legendary Riddle of the Sands in time to save one of their own from a rare and deadly poison? Is the Riddle a myth, a mirage, or the greatest engineering feat in the history of ancient Egypt?

What listeners say about The Riddle of the Sands

I really enjoyed this story. However, because Audible started with the second book in this series, I think there were some things in this book that I did not fully understand. Clearly there were some relationships and issues that required context from the previous book to grasp. Still, it was a great story and I hope we get more.

I hadn't read/listened to a Geoffrey Knight book before, but loved The Riddle of the Sands. An exciting story, well developed characters, and first class narration.

This one is a prime example of why it is so important to listen to the story sample before buying. The guy reading this made even MY rainbow hackles stand like sharp, unforgiving spikes. His painstaking, wet-mouthed over-enunciation combined with his languid lisp is, for me, the complete opposite of ASMR: I just wanted to punch somebody, starting with myself, for buying such a supremely annoying audiobook. Oscar Wilde would've pleaded with this reader to just shut it and go scrub his tongue with sandpaper! Plus, the story is derivative and the characters are poorly developed and too numerous. I cannot recommend.

The narration made it tough to get thorough

The narration made it tough to get thorough. Bad narration, poor quality as well.

Not really a waste of my time, but certainly not time well spent!! It was poorly read, Poorly edited, and had way too many gratuitous sex scenes. The villains in the story are best described as

Dry!!! But the worst is that the audio track was poorly edited. There were a surprising number of long pauses, repeated words, and repeated sentences. All things that you would expect to hear during a live performance, but also expect to be edited out of the recording. I doubt that Isaiah had anything to do with the editing so I will just leave his performance as Dry!!!

Was The Riddle of the Sands worth the listening time?

I suppose it was worth the time but just barely.