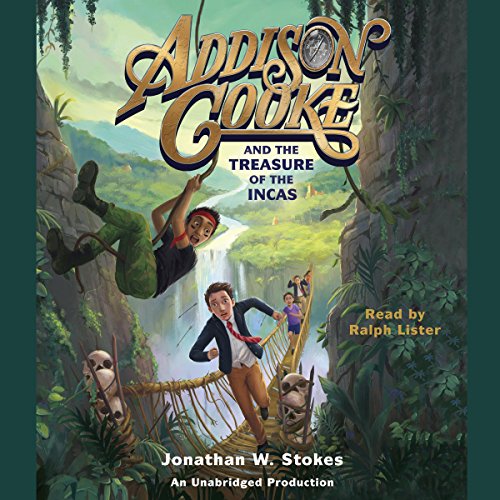 Addison Cooke and the Treasure of the Incas

By: Jonathan W. Stokes
Narrated by: Ralph Lister
Try for £0.00

Twelve-year-old Addison Cooke just wishes something exciting would happen to him. His aunt and uncle, both world-famous researchers, travel to the ends of the earth searching for hidden treasure, dodging dangerous robbers along the way, while Addison is stuck in school all day.

Luckily for Addison, adventure has a way of finding the Cookes. After his uncle unearths the first ancient Incan clue needed to find a vast trove of lost treasure, he is kidnapped by members of a shadowy organization intent on stealing the riches. Addison's uncle is the bandits' key to deciphering the ancient clues and looting the treasure...unless Addison and his friends can outsmart the kidnappers and crack the code first. So it's off to South America, where the excitement, danger, gold, booby traps, and car chases are never-ending!

Full of laugh-out-loud moments and nonstop action, and perfect for fans of Indiana Jones or James Patterson's Treasure Hunters series, Addison Cooke and the Treasure of the Incas is sure to strike gold with kid listeners.

"Cinematic pacing and action drive the story, but it’s Addison and his friends who will keep readers engaged. Humor is never in short supply, even when the group narrowly escapes danger, and Addison’s endless optimism and irrepressible confidence in his own abilities are endearing." (School Library Journal)

"Featuring a combination of history, settings, and adventure-fueled action, this cinematic novel should leave many readers awaiting Addison and company’s next escapade." (Publishers Weekly)

definitely made the kiddo laugh but there was way more violence in this - with unnecessarily graphic detail - than the summary let on. also dead parents and graphic telling of seeing Mom fall to her death. definitely scary for my 9yo who has dealt with lots of death this year.

narrator is food.story is funny and entertaining on a long trip. kept us awake. thx

It was fun. it was cool. it was awesome. it was super. It was Amazing.