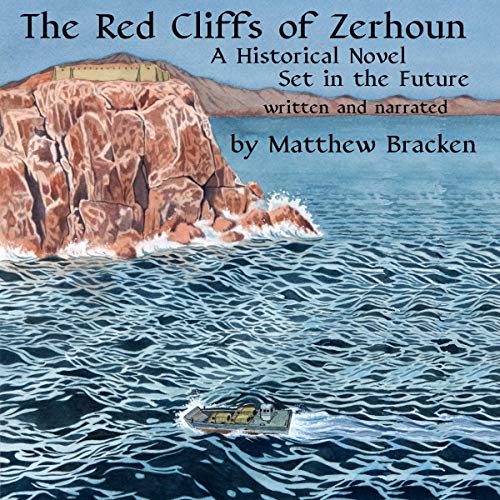 The Red Cliffs of Zerhoun

Dan Kilmer is a former Marine sniper in his late 30s. Fifteen years earlier, he returned home from military service in the Middle East and gave college a try, but his combat experiences prevented him from fitting into campus life.

In a South Florida boatyard, his uncle was attempting to refurbish an old cargo schooner, and Dan left college to help him finish the flagging project. After two years of work but before the 60-foot boat was relaunched, his uncle fell from a scaffold and died. While still in his mid-20s, Dan inherited the schooner Rebel Yell, but not the means to maintain it or to afford the cruising lifestyle. Soon after, he left the United States to embark on a series of voyages, mostly in pursuit of beautiful women and good times.

The action in this new novel takes place a few years after his adventures in Castigo Cay, the first Dan Kilmer novel. In The Red Cliffs of Zerhoun, Dan's trading schooner is located in Southwest Ireland, where he is attempting to sell 96 drums of diesel fuel salvaged from an abandoned NATO base in Greenland. The global financial system has collapsed, and both paper and digital currency have no value, but diesel fuel and gold still do.

While waiting to sell his remaining 30 barrels, Dan is approached by a retired SAS colonel and asked to transport a dozen former special operations commandos 1,400 miles south to the Canary Islands, where they will be transported by a landing craft to Morocco in order to conduct a rescue operation. Two months earlier, nearly 70 Irish and English girls had been kidnapped by pirates from their elite Irish boarding academy and taken to Port Zerhoun, which is under the control of a cartel of modern corsairs. The young schoolgirls will be sold at auction as sex slaves, unless a ragtag team of former commandos can liberate them in time.

What listeners say about The Red Cliffs of Zerhoun

This is another marvelously well written and keep you on the edge of your seat book. I can’t wait for Bracken to write another wonderful book.

As usual Matt has put another great story together! Hope this isn’t the end of Dan killmore’s adventures.

As dystopian fiction goes this is quite good.

It shows a pretty realistic version of how the world might be in the future.

Action scenes were quite believable.

There is an actual plot and it even has some interesting twists.

I really enjoyed the reading Red Cliffs. Very happy to revisit the story with an audiobook...read by the author. Audio quality was excellent. Usually that suffers when an author DIY's a reading.

This is a thrilling story with lots of legitimate nautical jargon blended in. Do you know the difference between a sheet and a halyard? Do you know what a pelican hook is? Not necessary to following the story, but you can tell the author has lived the cruising life.

as all braken books are awsome. great story and just enjoyed it fully. have read and listen to all his books and look forward for new ones.

I sure hope we get some more of Dan's adventures, and Matt, you did a fine job on narration. THANK YOU for getting this audio book produced.

The book reads like an action-packed roller coaster ride to hell and back!

Bracken does it again! I read all three of his enemies foreign and domestic books, as well as Castigo key. Before reading the cliffs of Zarhou. Although works of fiction, they all weave historical fact and offer very plausible, if not probable future scenarios. You will be entertained and educated - all in one big explosive ball of wax!

I can hardly wait for the next book! Hey Matt, you got to try to make a movie out of one of them!

A great read – Bracken’s best yet!

A follow up to Castigo Cay, the Red Cliffs of Zerhoun follows the continued adventures of Dan Kilmer, a vagabond who who has to make his way in a dysfunctional and dystopian world. A world seemingly closer to reality every day.
As an ocean sailor myself, Bracken’s descriptions and revelations of the protagonists voyages are very realistic.
With Red Cliffs -Bracken has hit the ball out of the park. This is, in fact, his best yet!