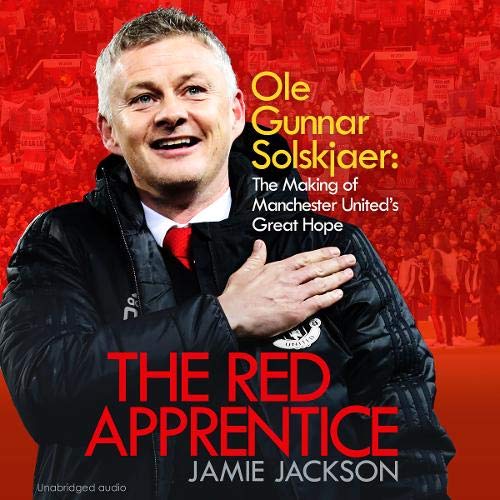 By: Jamie Jackson
Narrated by: Chris Harper
Try for £0.00

When Ole Gunnar Solskjaer returned to Old Trafford as caretaker manager midway through the 2018-19 season, he breathed new life into a team that was drifting. In this new and definitive biography, Jamie Jackson investigates why he was the perfect man for the job to bring back the glory days.

After the confusion under David Moyes, the stagnation of Louis van Gaal and the growing trauma under Jose Mourinho, Manchester United was a club increasingly struggling to challenge for major honours, something the fans had been accustomed to during the reign of Sir Alex Ferguson.

So when Ole Gunnar Solskjaer, a match-winning hero of the Reds' great Treble-winning side returned to Old Trafford on 19th December 2018 as caretaker manager, he was welcomed with open arms. Here was a man who understood what it was that the fans demanded and he had a plan to give it to them.

They went on a record-breaking run of victories that secured him the position on a permanent basis, before old frailties re-emerged, showing the scale of the job he had always dreamed of taking on. During the summer transfer window, he began a dramatic reshaping of the team's personnel to set them up for the 2019-20 season.

The Red Apprentice, Jamie Jackson's fascinating biography of Solskjaer, takes the listener back to the Norwegian's early days to discover the making of the man, relives the highlights of a stunning playing career - and that Champions League-clinching goal in 1999 - and explains why he is the natural choice for United in the future.

What listeners say about The Red Apprentice

Apart from Ole’s early years there is no real insight or story to tell. Ole seems to be an ordinary man who’s had an extraordinary career. Tough and resilient. Yes. But don’t expect anything more than this in terms of analysis. And that’s about it. The author has padded out the rest of the book with match reports. There’s a interesting story to tell but it will be told by others and in retrospect. This period of Utd’s history is still evolving and until they win the league again, then the final story will be told and be more interesting.

as a follower of MUFC 1994 I can recall the career of OGS well and this is a solid and interesting view into his career, mindset and driving factors from his early playing days through to being offered the job and his first season as Manager of MUFC.

The reader appears as familiar with the Nordic language and collegialisms as he is with the premiership. he presents the contents of the book with verve, excitement and a great tone and pitch. thoroughly enjoyed the listen.

fascinating and detailed retrospective about OGS. throughly informative and precise. needs to be recorded louder