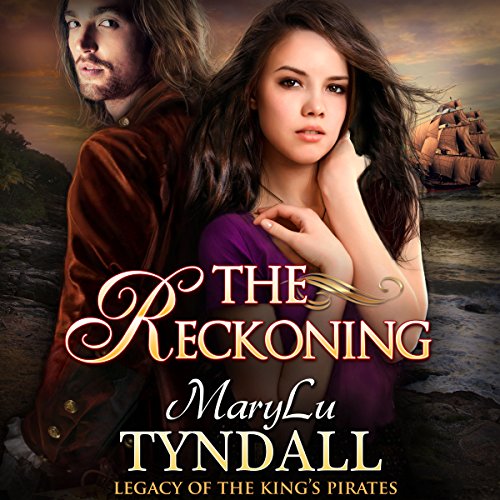 By: MaryLu Tyndall
Narrated by: Mary Sarah Agliotta
Try for £0.00

When Morgan Shaw crept into the hold of an old pirate ship replica at San Diego's annual Tall Ship Festival, her only intention was to avoid the guy who had just dumped her and who was now boarding the ship with two women on his arm. What she didn't expect was to wake up aboard a real pirate ship 300 years in the past. But of course, it wasn't real. Her wealthy father had obviously staged it all in an effort to get her mind off her upcoming chemo. Or had he?

Pirate Rowan Dutton seeks enough treasure to repay a debt to his sister and reinstate the Dutton name among British Jamaican society. He is but one major haul away from accomplishing his goal when a strange woman appears on his ship and causes him to lose his prey. Despite his anger, he is enthralled with the little minx, her strange clothing, odd speech, and her insistence that they are all actors playing a charade paid for by her father.

Yet when the brazen little lady divulges Rowan's secret to a longtime nemesis, events are triggered that could cost them both their lives and change the course of history forever.

Faith, Love and Pirates! What's not to love!

I enjoy faith based romances but sadly sometimes they lack in story and adventure. This one did not disappoint me at all. What could be more adventurous than Time travel and Pirates?!!

This book has intriguing characters, loads of adventure and a well balanced story of lessons learned through mistakes. The author wonderfully writes characters with human frailties and show's the importance of forgiving and trusting God in all circumstances.

What else can I say? Well, with MaryLu Tyndall's writing and Mary Sarah Agliotta's narration you can't go wrong. ;-)

I received this book for free via Audiobook Blast for an honest review.

This is the story of a present day woman, Morgan Shaw who is transported back to the late 1600's during a visit to the Tall Ships Festival, in San Diego 2015. In her current life (2015) she has just been dumped by her boyfriend and is about to start chemo for liver cancer. Needless to say, she has a few problems to deal with.

While on the ship The Reckoning at the festival, she finds a mysterious ruby and when one of her tears falls on it, magical time travel takes her back to the time when it was a real pirate ship. It is there she encounters the enigmatic and mysterious Rowan Dutton, who is the captain of said ship.

I'd like to say the rest of the story was predictable, but it really wasn't. There were quite a few twists and turns, not what I expected. It was an exciting listen, well worth it. Ms.Tyndall is an excellent writer and I can say that I could almost feel that balmy Caribbean breeze she describes. Well done!

I would be amiss if I did not mention, that I did not realize that this was a Christian romance and perhaps I missed that. I could have done without the many references of "placing our lives in the hands of the Father" and similar quotes.However, if you are into that sort of thing, go for it. If not, be forewarned. Still a great story nontheless.

Ms. Agliotta does a fine job with the narration, the British, Jamaican, Scottish and the many other characters, male and female. She really brings them to life. However, the sibilance throughout the entire book is so harsh that at times I had to turn down the volume so low it was difficult to hear the narrative. I'm not certain if this was actually Ms. Agliotta's voice or poor post processing. I tried on multiple sets of headphones and it was the same. I'm no audio engineer, but this problem is easily solved by just tweaking down that frequency a bit.

Overall though, a very entertaining listen!

I own the entire "pirate legacy" book series by Ms. Tyndall and the two pirate stories from the series on Audible. This audiobook is reminiscent of a Tamara Leigh story called "Dream Spell", but not exactly like it in storyline. It is intriguing with hints of desire, danger, redemption and a swashbuckling backdrop like Pirates of the Caribbean. Well worth the coin. ATTN: Audible/Amazon, please record the earlier books in this pirate series, because they do actually lead into this book. The narrator, Mary Sarah is beyond excellent in her diction, distinction of characters and performance. If you are a friend of classics such as Robin Hood, Ivanhoe, the Three Musketeers, the Scarlet Pimpernel, etc, then you will definitely enjoy this book.

Time travel and Tyndall and pirates in one book. What reader could ask for more?

She does a great job of making the time travel integral to the story, to make sense. And, as always, the spiritual aspect of the novel is as important to the romance as are the hero and heroine.

Swept out on the waves of past times...

This book swept me away on a wonderful adventure. Must admit I mainly bought it due to the narrator, Mary Sarah Agliotta, begin a favorite of mine. I'd been listening to several other books, and simply missed her too much to finish them. So I bit the bullet and bought The Reckoning, which I'd been avoiding up to this point due to the half hearted reviews.

It was a great book. I really can't understand why it wasn't reviewed better. I'm also really hoping Adible picks up all her other books, and has Mary Sarah Agliotta read them, I'd buy them all in a heart beat, and recommend them.

Marylu Tyndall is a wonderful author. I won't doubt her again. In fact i couldn't wait on Adible, so i went online and bought Tears of the Sea, one of her latest. Thanks Adible, and Mary Sarah Agliotta, for introducing me to a new favorite author.

This audiobook was so amazing! Mrs. Agliotta portrayed each character perfectly and each character's voice was so different from each other's. No confusion on who was speaking. Emphasis was right and when a character was sad or happy or distraught, you felt it along with her/him. Her accents were so enjoyable to listen to, they were just so amazing. She really brought the book to life! I will most definitely be listening to this one again and again!

I received a copy in exchange for an honest review.Thank you to Mrs. Tyndall for the opportunity to do so! I am still smiling about this book because it was truly awesome!

What a great story. It has romance, adventure and pirates to boot, what more do you need! Oh and last but not least, it is also a really good time travel story! This is a clean, sweet story with just the right amount of passion!
I would recommend this to all ages!

Although the The Reckoning doesn't get the 5 stars I gave The Ramon, it is far better than many other books. The Christian Pirate plot brims with great opportunities to see the problems the faithful have faced in other times. I loved Morgan and enjoyed the time travel element. I didn't get to read the first few books in this series because they are not out in Audible version. I have to guard my eye-time or my eyes grow too tired. Plus I listen while I drive, do house work and fall asleep.

The plot is almost too much like The Ransom and the character Rowan is too different without the author telling us why. His womanizing, alcoholic and spineless personality, so flawed in the previous book almost made me stop reading when Morgan suddenly appears on his boat...I mean ship😍 (excellent subtle humor). I created a reason for his change to a bold, daring , slightly flawed character in my head and continued reading. This plot is well worth overlooking the problems with the previous book.

You might let time lapse after reading The Ransom before you read this book. Great author!

i love pirate romance books even like this one. didnt want to stop listening

I Did Not Want This Book to End!!

Where does The Reckoning rank among all the audiobooks you’ve listened to so far?

I have enjoyed all of the audiobooks that I have listened to so far, but this is most definitely my favorite of all!

Rowan was my favorite, even though he had his failings. But, the author truly brought him to life for me.

What about Mary Sarah Agliotta’s performance did you like?

Once I hit the halfway mark, I wished I could listen to it all in one sitting. I enjoyed the story from the very first moment I began listening, however, it really took off for me half way through and the author threw in some huge twists that really surprised me.

I highly recommend this book and the recording of it. I plan to go back and read the other books by this author that I have not yet read because I enjoyed this one so much.