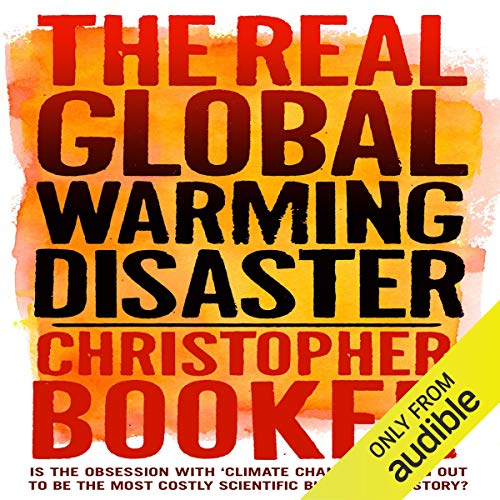 By: Christopher Booker
Narrated by: Ric Jerrom
Try for £0.00

This original audiobook considers one of the most extraordinary scientific and political stories of our time: how in the 1980s a handful of scientists came to believe that mankind faced catastrophe from runaway global warming, and how today this has persuaded politicians to land us with what promises to be the biggest bill in history.

Christopher Booker interweaves the science of global warming with that of its growing political consequences, showing how just when the politicians are threatening to change our Western way of life beyond recognition, the scientific evidence behind the global warming theory is being challenged like never before.

The audiobook exposes the myth that the global warming theory is supported by a 'consensus of the world's top climate scientists'. It shows how the UN's Intergovernmental Panel on Climate Change is run by a small group of 'global warming' zealots, who have repeatedly rigged evidence to support their theory. But the politicians, pushed by the media, have so fallen for its propaganda that, short of dramatic change, our Western world now faces an unprecedented disaster.

What listeners say about The Real Global Warming Disaster

This book is a very clear summary of why climate deniers think that climate change is not real. I really can't thank the author enough for presenting his points so clearly that I can rip them apart. The logical fallacies he uses are clearly presented where he tries to demonize the word "consensus" and frames climate scientists working together as a conspiracy while climate deniers working together is unification. The author tries very hard to convince the reader that all the tactics of the oil companies - lobbying, tax breaks, subsides, obfuscation of data - are actually the tactics of the climate scientists. It's a very convincing argument to anyone who goes no deeper, but even some brief research would find the Swiss cheese like holes in this book. For example, the fact that it snows somewhere in the world does not mean that climate change is fake. I lost count of how many times the author felt the need to mention that it snowed when certain climate events were happening. Also, the author mentions Antarctic sea ice is growing when it's actually the land ice that's shrinking and that's the ice that should stay where it is all year! Al Gore's lifestyle is a favourite target as if a businessman's lifestyle or parents (how can he control that) makes anything he says less true. I could go on, but I would be taking away from your fun. In 2020 when bush fires have ravaged Australia and California and Africa is on the verge of famine, this all rings very hollow. The author briefly acknowledges that there ARE environmental problems, just not caused by climate change. He also posits no solution to anything. I assume in the absence of any useful talent and a desire for publicity, the author did the only thing he could which was to get in the way of real profit. A real eye opener into the seedy underbelly of humanity. The reader did an excellent job.

Belief in evidence is what counts. Don't like Trump, didn't like Thatcher but at least they didn’t allow puppets to pull the strings.

I have read many books saying climate change IS happening and some that say it is not. I am still undecided. But feel i am in a better position for listening to this book. The criticism of the make up of the IPCC in particular is worrying. If you ONLY read one side of an arguement, how can you say you have made a CONSIDERED decision?

Masterful run through of the sceptical view

If global warming turns out to have been more of a political pushed agenda than a scientific consensus then this account will be the ultimate: you were warned moment. It is difficult not to be all out convinced that global warming as a man made phenomenon is a purely political agenda. This is the books weakest side as well. The opposite view is almost always narrated as not so benevolent as the sceptics.

Refreshing look at the skeptic view

What did you like most about The Real Global Warming Disaster?

The book examines the skeptic view which has been outlawed by the climate warming orthodoxy. It explains how the many counter arguments put forward by academic scientists are ignored by politicians despite the logic of many of the arguments and shunned by broadcasters and news owners/journalists who seem to almost enjoy the lack of impartiality in reporting climate change, like as if it is a football team.

The book disputes that there is a man made climate change = catastrophe consensus.

The book adds some weight to the argument that our views about supposed AGW and the surrounding governmental policies need to be reconsidered.

This book is, of course, biased, but not nearly as much as the constant news releases related to the "scientific consensus" and "the latest science". Many of the assertions made by Booker cannot be denied. I happen to have two science degrees and have worked in the the fields of forestry, forest pathology, and general environmental science for over 40 years. I was disappointed that Booker did not even mention the most glaring bad science in Mann's Bristlecone Pine "study". I'm not the statistical wizards that McIntyre and McKitrick are, but I DO know a thing or two about trees and their physiology. There is NO WAY that you can derive reliable temperature inferences from growth ring studies. The reason for this is that the radial growth of trees involves AT LEAST three other factors besides temperatures, and, I would vehemently argue, these factors taken each unto their own, are likely MORE important than temperature. Moisture, competition for favorable conditions like light, protection from wind, and other microsite factors CANNOT be separated from temperature and have much more effect on both spring and summer radial growth. So to draw any inference from radial growth related to temperature would be an impossible task. When proxy data is really all one has, one is tempted to make it sing and dance and perform all sorts of things it simply cannot perform. So.... back to this book ....

It is well-researched and still valid even though, what, eight years old now? Methinks, however, that they repeated some points one or two times more than necessary... to the point where, by the appendices, I had to stop listening. I think the number of times certain points were hammered on made the arguments made somehow less convincing.

Overall, good job, and keep fighting the good fight. This nonsense has gone on far too long, the general public has become a bunch of mindless automatons who repeat the same old press releases over and over. "Science" is not on the side of any political party. I happen to believe that there is very likely some anthropogenic effect related to climate change. But I have yet to read a very good paper making this case, and the hyperbole and vitriol surrounding this issue is toxic to REASON itself.

I you hate being scammed, read this book!

An excellent and well referenced book on the "Global Warming/Climate Change" swindle being perpetrated by
"Scientists" and Governments around the world.
Declaring it "Settled Science" is NOT how Science works. If new information is presented, you retest your hypothesis in the acid bath of the new information, not dismiss the information and declare the information invalid.

All should read and know this truth.

It was well presented and very informative. The information was timely and interesting. You will gain much understanding on the topic of global warm and a real truth.

Finally a "follow the money" factual look at who is saying what about global warming and what drives them to say it. I also appreciated the sources of data and analysis methods revealed. Starting with false information, of course, produces a false conclusion. What a great plan to move other peoples money around the world and hold 3rd world countries hostage! All the while convincing the masses that they are taking a moral high ground. But any lie, if enough people repeat it long enough, is perceived as true.... It is still difficult to determine what information is correct and what is not, so I'm hoping for an update follow up!

I've read a lot about climate change--on both sides.

I feel like understand the science pretty well, but I have always been mystified as to how so many smart people could disagree with each other on such simple issues.

Booker's history details the creation of the IPCC, and the political baby steps which got us here. In each case, a small group acted in their own interest, and each step seemed almost reasonable. But the net effect has been this wide-scale tragedy, that will scar and shame the scientific community for generations.

As someone who really loves science, I hate to see it abused. This book offered little peace, but gave me a lot of understanding.

Absolute confirmation of the reasons for climate change. Go figure...our sun and it's decades and centuries of solar radiation variations, sun spots and prominences. Duh!!! We need another follow up book about the CERN particle accelerator discoveries showing co2 as minuscule to the equation and the cosmic radiation from our sun as the lion share.

Global Warming on the Hot Seat

A meticulous account of the science, pseudoscience, and political intrigue involved in the global warming saga. Rich Jerome is a fabulous narrator and Christopher Booker has crafted a masterpiece exposing the hypocrisy of unchallenged elements of the political realm. A must read for anyone who wishes to engage in an intellectually honest discussion of this issue.

If you could sum up The Real Global Warming Disaster in three words, what would they be?

What was one of the most memorable moments of The Real Global Warming Disaster?

President Obama is put as solely responsible for saving the world.

The idiosyncrasy and sadness that exists with the political view of something that has been blown off tract by a few egoist and the massive extent of those engaged.
.

The message made my blood boil

Mr Booker reveals, point by point, all the lies, doctoring of data, political collusion, and name calling of any who dare challenge the "consensus". If only half of what he reveals is true, then the global warming, or climate change, hysteria is the biggest scam ever perpetrated on the world. And the goal seems to be the collapse of capitalism and the creation of one world government, led by the UN.

horrible stupid tripe. easily disprovable lies are presented as the truth. do not listen to this unless you're an idiot too.