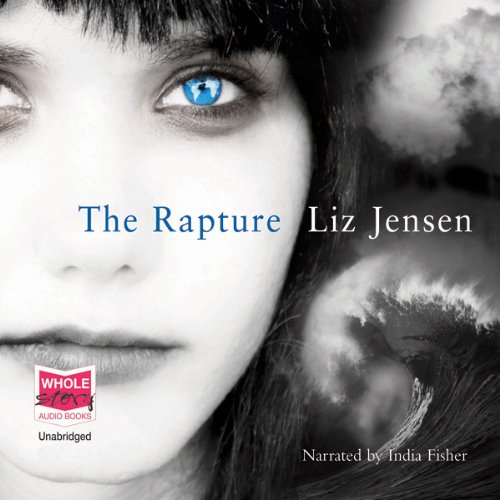 In a merciless summer of biblical heat and destructive winds, Gabrielle Fox's main concern is to rebuild her career as a psychologist after a shattering car accident. But when she is assigned a patient who is the most dangerous teenager in the country, she begins to fear she has made a terrible mistake...
©2009 Liz Jensen (P)2009 WF Howes Ltd

What listeners say about The Rapture

What I love most about this audiobook is the brilliant narration - she brings this book to life. The story is interesting if a little dystopian & I was left wondering what would go on to happen to the characters after the book had ended. I've listened to this a few times now, even though I know the ending & I still find something new in it. Recommended if you can suspend belief & just go with the unusual story.

This bears a few similarities to another Liz Jensen book - The Uninvited and it's another chillingly, gripping listen. Reccomended.

India Fisher did a great job lending the leading characters not only a voice - she brings Jensens enthralling story to life!

I thought this would be a run of the mill thriller, but it was so much more. A psychologist with a past arrives at a mental institution for criminally insane children. Her new patient, Bethany, seems to be able to predict natural disasters. Can she really foresee them, or is the psychologist not as stable as she seems?

Hard work, poor reader, too much of a rant

After a promising start I couln't finish this book, the reader is poor, and the subject matter far too silly to be worth the bother. Too much of a sermon regarding global warming, and not enough story, the balance is wrong for my taste. I am not a climate change denier, far from it, but this book was pants!

I was completely engrossed in this book, which I listened to from Audible. The book I was supposed to be reading for a book group was only half read by the day of the discussion and I was looking for jobs around the house that I could do with my headphones on!!

Unfortunately a couple of niggling annoyances left it as a 4 1/2 star read. Firstly the constant reference to Frazer Melville rather than Frazer - who uses their whole name all the time? References to him as 'The Physicist' weren't much better. In addition I cringed at the repetition of the lengthy Spanish (Portugese?) phrase related to the painting in Gabrielle's house.

Gabrielle Fox is an Art Therapist on the rebound from a crippling accident that has left her confined to a wheelchair, paralysed from the waist down. This leaves her very vulnerable when she is confronted by Bethany Crawl, a psychotic teenager who killed her own mother by repeartedly stabbing her with a screwdriver. Gabrielle makes a noble attempt to behave professionally with Bethany but the teenager is wise to all the 'psychobabble' and soon sees through her.
Bethany claims to be able to predict environmental disasters and when she is repeatedly correct it becomes more and more difficult to fob it off as coincidence.

The only date that I spotted as I listened to the book was 2012, a date that has been linked to current apocalyptic predictions, making the book even more topical. In addition there is a love interest, in the person of Frazer Melville and a Christian viewpoint, depicted as the Faith Wave, whose members believe the increase in catastrophic events heralds The Rature, when they will be whisked off to heaven and non-believers will be left to suffer.

I couldn't predict how the author was going to end the book but I thought it was spot on.
It's a shame that many people have not enjoyed it so much and it does have its flaws but I'd recommend it without hesitation.

Dire. A total waste of time.

I've never come across such an unappealing bunch of characters. This is, literally, the only audio book I have ever purchased that I had to switch off. And this was the unabridged version, so it can't be put down to poor editing. The two main characters are intensely dislikeable and by the end of the book (I skipped to the last CD out of curiosity) I was actively praying for them both to drown.

Gabrielle Fox is at first quite an interesting character. But gradually her incessant moaning and negativity really drags things down. She offers no positivity, no hope, and adds nothing to her existence. Her constant paranoia about her fledgling relationship with Frazer Melville is just unpleasant after a while. And the constant reference to 'The Physicist' or 'Frazer Melville' is unbelievably grating. Never 'Frazer' or even 'my boyfriend'...just either his full name or his profession, again and again. And given Gabrielle's attitude, I felt deeply sorry for Frazer and wondered what on earth he saw in her.

Bethany - well, she has no redeeming qualities whatsoever. Fair enough, she's been locked up in a psychiatric hospital for a very good reason, but she is completely one-dimensional as a character, nasty for the sake of being nasty. It seems she had a rough upbringing, but overall nothing could justify her savagery.

Really - this book is a complete waste of time. It has clearly been written as a sort of 'first pass' film treatment and reads like a bad disaster movie.

From the beginning, Gabrielle’s voice, bitter, but determined after a life-decimating accident, pulls you deep into the unstoppable unspooling of disaster. A remarkable piece of writing, tension building slowly at first until it hurtles towards the earth-shattering conclusion. At the centre of it all is Bethany, a foul-mouthed teenage killer and prophet.

Sorry Audible, this is a load of tosh. I can't think when I was more disappointed by a reading or story and by the end I wondered why I'd bothered.

Liz Jensen is a fantastic writer, but this - probably her most successful novel to date - was a bit too "Nicci French" for me. Yes it's a page turner, yes it's got an interesting plot and a great central character. But it's also predictable, uninspired and horribly commercial. I hope it makes her lots of money so she can get back to writing the kind of stuff she does best!

A distinctly English take on the "End of Days"

This "End of Days" tale is more fiction with science in it than classic science fiction. The focus is on the characters and the different ways in which they are broken and on the nature and impact of belief on how we see ourselves and others.

Nevertheless, there is still a good end-of-the-world-as-we-know-it thriller to keep you turning the pages and solid science to keep everything credible.

"The Rapture" felt more real to me than other "End of Days" apocalyptic nightmare novels and movies, not just because it is set in the UK but because I feel a strong affinity for Gabrielle Fox, a paralysed therapist (now there's a metaphor to conjure with), from whose point of view the story is told.

She and I share certain values and assumptions that are common amongst the Brit graduate population but which rarely surface in American fiction.She embraces atheism with a bone-deep belief that perhaps only someone raised as a Catholic can achieve. She despises Christian fundamentalism at an almost instinctive level because she views that kind of faith as pathological. She is apolitical but fundamentally distrusts politicians and authority figures, especially as she is one. She pursues a professional career because it is something she is good at but not passionate about. She is a therapist who is insightful without being empathic, who distrusts the tools and language of her trade and understands that psychiatric hospitals are funded more for their value as surrogate prisons than as places of healing.

All of this means that Gabrielle views the concept of "The Rapture" not only with disbelief but with contempt, so she makes the perfect foil for all those around her who believe the End of Days has arrived.

Gabrielle is more than a plot device. As she mourns for all that the accident that paralysed her has taken away and struggles to imagine what her life could be, she becomes the measuring stick for human hopes and fears which brings scale to the idea of what it would mean if the world didn't end but we did.

The second remarkable character in "The Rapture" is Bethany Krall, Gabrielle's teenage patient, confined to the hospital because she murdered her mother. Bethany is a wonderful creation: convincing, frightening, violent, crude, repulsive, vulnerable, damaged and fundamentally honest behind all the lies.

My only reservation about "The Rapture" was that Gabrielle's perspective came a little too much from her head rather than the heart but that could be because I also live in my head and I use fiction to try and find the way to my heart.

This is a book that has "MAKE ME INTO A MOVIE" written all over it. I hope, if that happens, that they'll keep it in the UK and hire a director with an atheist's heart to make it.

I've already added another of her books to my queue. The Rapture is an intelligent thriller with fascinating characters. The story, reminiscent of Children of Men, is set slightly into the future. I was fascinated start to finish. We have an unlikely heroine who takes us on a wild ride complete with apocalyptic warnings, a prophetic child guilty of matricide, and a romance that features sex that is more real life adults than romance novel fantasy. This is one smart, well-written book. Enjoy.

Bad story, bad plot, bad ending, ok characters. Very preachy and one sided about climate change. Yet another book that seems to blame all problems on Christians and portrays them as bumbling buffoons. I'll be deleting this one.

What does India Fisher bring to the story that you wouldn’t experience if you just read the book?

The best thing about this book was India Fisher. What an entertaining reader.