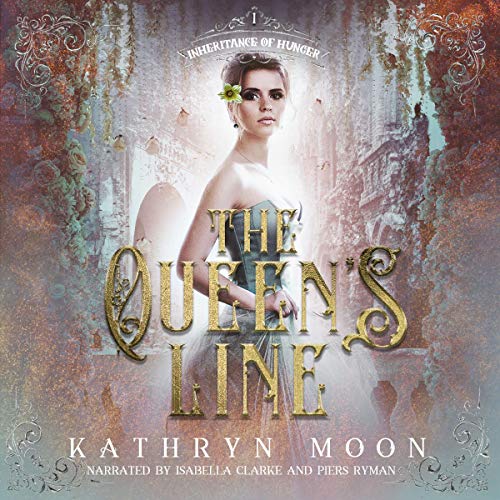 By: Kathryn Moon
Narrated by: Isabella Clarke,Piers Ryman
Try for £0.00

The Kingdom of Kimmery is broken....

Bryony, Princess of Kimmery, has a secret. She lacks the Hunger, the magical and passionate craving that is responsible for Kimmery's prosperity. Without that power, she will lose the crown and the chance to rule the kingdom she sincerely loves.

The Queen's Line must select Chosen to satiate their Hunger with and Bryony's Choosing ceremony has arrived. On her first night with her newly assembled men — a prince, an ambassador, a stablehand, a sculptor, and a rogue — her own secret, and the secrets of Kimmery, spill out between them.

North of Kimmery's capitol, the people are starving. When her truth is revealed to her iron-hearted grandmother, Bryony invents a plan to buy time. She and her Chosen will go to the desolate Winter palace where she can pretend to explore her Hunger while investigating the kingdom's failings.

Bryony is determined to take Kimmery and its people back into a golden age, and keep her crown. As passions rise with her chosen, so do the obstacles and adversaries they face. Kimmery's prosperity isn't the only thing Bryony misunderstood, and the Hunger is more than what it appears.

What listeners say about The Queen's Line

Let me first off say that I love this series and am reading book 3 that just released and am going to be so sad once its over!! I fell in love with Bryony and her Chosen and the storyline for this series is incredible. A quick summary of the story (longer review on Amazon), Book 1 really provides us the background that explains the Hunger, the Queen's Line, and how different Bryony is. She doesn't experience the Hunger in the same way and when she finally does indulge in it (and with her Chosen), its a marvelous yet scary new facet of her being/life. I won't give away how it comes to be and the difficulties she goes through, but its amazing how every blossoms and grows. I wouldn't say this is a slow-burn, since the Hunger won't really allow it haha, but the adding of her Chosen throughout the book (and future books) in that aspect is a slower burn. I absolutely loved this fantasy RH book and new world Kathryn Moon has given us. I think in book 1 my favorites were Wendell and Owen. Oh and did I mention there is some yummy M/M in this series?? Hahaha soooo good! Ok, you should really listen/read this series, you will love it and fall for these characters like I have.

For the narration, I think Isabella Clarke deserves 5 stars but Piers Ryman is more of a 3.5-4 stars for me. Isabella did a great job creating Bryony and getting her inflections and emotions right. I definitely will be checking out more of her narrations. I think his rendition of Thao was INCREDIBLE and sounded exactly how he sounded in my mind as I read the book. I think some of the guy voices were not how I imagined them and kinda took me out of the story sometimes (sometimes the accents were tough to understand every word). I think his rendition of Owen and Cress were my least favorite (and they are some of my favorites in the series), but his other ones were good.

I can't wait for the next book on audio, but I am gonna go back to reading book 3 and crying when its over haha. This series is incredible, the audiobook really helps being this fantasy world and this intimate and complicated plot to life. 1000% recommend ❤️❤️❤️

I really enjoyed this book and had not read the paper or electronic version beforehand. The beginning was a bit slow as the premise for the story was laid down and the MC was overly meek and weepy as someone who may eventually rule but the narration was very good with different male/ female narrators with various accents and distinct voices. Although, there were times when some of the males had such strong English accents that they were a bit difficult to understand, overall the narration added interest to the story. I really like this audiobook but it’s a shame that neither book 2 nor 3 is currently on audiobook. What a shame.

This story is one of my favorites and was so beautifully performed! They nailed all the different accents, and the storytelling flowed well. I have read this book multiple times but the audiobook brings it to a whole other level.

I recently got into listening to audiobooks, and this one moved to the top of my list. The narration is nicely done and enjoyable to listen too! The narration keeps you engaged into the story which is a key for listening! I love Bryony’s character, she is a fav of mine, and this book has turned me into a one click for Kathryn's books! If you are looking for a fantasy book that will take you on an adventure and with some feels, this is the series for you!

I just love Bryony and her chosen men! As always, this author does an amazing job at building a world you can get lost in and developing characters that you can't help but connect to. so well written and pretty well performed! it has a great level of steam too!! Can't wait to listen to the next one!

I hunger for more

Kathryn Moon never ceases to amaze me in how completely unique her series are! She's become a recent favorite of mine and I'm enjoying devouring her backlist. The narrators did a fantastic job bringing these characters to life. Isabella Clarke did a fantastic job portraying Bryony as this anxious, shy woman in the beginning all the way through her metamorphosis. Piers Ryman did a good job at making each of the men sound unique and different. This book does end on a cliffhanger, but I don't think it's one that leaves you in pain...just more curious and excited for what the next book offers!

What a wonderful book to listen to!

What an amazing piece of work that Moon has written. We start a journey of discovering who we are on the inside. It was an marvelous architecture of world and people building. The voice work was beautifully done I enjoyed listening to every second!

Story: I had previously read this book as an ebook and though the story is great, it didn't really click with me and I wasn't very interested in continuing the series. Well let me say that the audiobook has changed my mind 100% and I am excited to get started on the next audiobook. If you are like me and liked the premise of the book but couldn't really get into the ebook, give this audiobook a try because it will change your mind! The narrators really bring the story to life which helps you engage with the plot more.

Narration: I think Isabella did a great job as Bryony and liked that Piers did different accents for each of the guys POV to help distinguish the male characters. At times I did feel it was hard to understand some of what was said due to the accent, but that's just how accents work and luckily it was just a few words here and there and not whole sentences so it didn't take away from the story.

Overall: Kathryn writes amazing stories and the narrators did a great job brining her characters to life. Great audiobook that I would definitely recommend to others!

I love this audio book, the narrators brought the characters to life brilliantly. I personally can not wait for the second and third books to be released, and I will be purchasing them as soon as they are out. Kathryn Moon is a favorite author of mine and I was so glad when she released this series and then announced the audio books.

This book was amazing. In terms of narration it always takes me a bit to adjust to British English, however once I was used to it, I found the narrators doing a good job!


The plot of this book is intriguing and pulled me in right from the start. I can't wait to read/listen to the next books