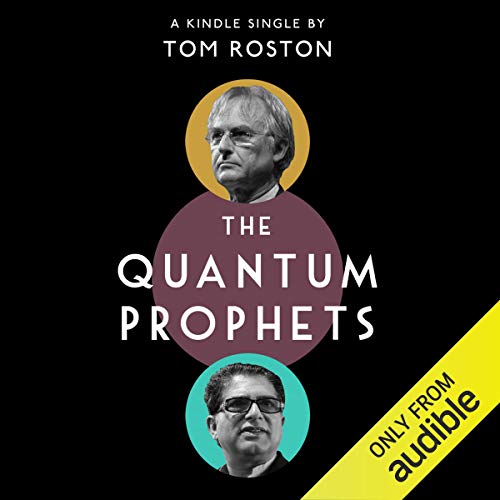 Richard Dawkins and Deepak Chopra are two of the most famous Big Thinkers of our time. And yet their deeply acrimonious, decade-long battle over God, human consciousness and "quantum healing" has gone unchronicled until now. Dawkins, a best-selling author and evolutionary biologist who coined the term "meme", has staked his name on the cause of militant atheism. Chopra, a mind-body guru with a global following that has included the likes of Michael Jackson and Lady Gaga, has increasingly set his sites on the scientific status quo.

Author Tom Roston seeks to uncover what lies beneath their provocative war of ideas in this intimate story of his search to understand his own spirituality and science's hard questions. He travels from Toronto to California to the Quantock Hills in Somerset, England, to Puebla, Mexico, chasing these two alternately fascinating and infuriating men, wrestling with their ideas, and coming up with his own.

Tom Roston is a veteran journalist who began his career at The Nation and Vanity Fair magazines, before working at Premiere magazine as a senior editor. He is now a freelance writer and frequent contributor to The New York Times. He writes a regular blog about nonfiction filmmaking on PBS.org. He lives with his wife and their two daughters in New York City.

What listeners say about The Quantum Prophets

Anything thats truly real can stand up to scrutiny

The author tends to paraphrase Dawkins statements in his own words for example he doesn't really say Religious Education is tantamount to 'Child abuse' per se (he actually recommends knowing the King James Bible) - he actually says telling children hell exists is disgraceful & goes on to cite examples of real psychological damage this can cause as a result. The author could have cut & pasted exactly what he'd said in The God Delusion rather than paraphrase him & over simply what he actually said. Because Dawkins has a proper job & Chopra doesn't the author was only capable of getting interviews with Deepak. Why would Dawkins want to engage with someone writing about Chopra? For the same reasons Dawkins refuses to debate creationists: if he did it would give a false impression that there are two sides to the story & doing so would be like a debate between a globalist & a 'flat earther.' The author certainly snatched a few sound bytes from other sources like Professor Krauss & Professor Dan Dennett but these were rather brief & he could have simply related content from YouTube where Sam Harris (the American Richard Dawkins in many senses) cuts through Chopra's use of 'Quantum' mumbo jumbo presented as profound insights into the human condition. They aren't remotely profound because if he could prove even one of his claims he would be famous for TRUELY explaining a mystery. Chopra doesn't generally use words like 'perhaps' or 'maybe' with regard to his claims, he presents his opinions as if they are known facts when they are anything but that. Dawkins cornered him on this disgraceful mendacity & Chopra suddenly changed tack asserting 'Quantum' was entirely metaphorical! His books don't say 'Warning: All references to quantum healing, quantum consciousness or quantum spirituality are entirely poetic & should in no way be associated with scientific understandings of the word.' Why put Dawkins into the category of a 'Quantum Prophet' as the title of this book suggests? He's a biologist & far too empirical to be referred to as a 'prophet' of any kind.The greatest danger of omitting to expose Chopra's chicanery is that people who can't tell the difference between real science & pseudo science might believe what he claims & opt for faith based 'solutions' which of course aren't solutions at all. As a result they can dismiss scientific cures as their best option & every year many people end up dead as a result of dismissing evidence based outlooks. There are a great many news reports of individuals who have made this kind of fatal mistake & Chopra & others like him are at least partially responsible for misleading people on this matter. This is not a trivial omission from the book.

I did manage to get an insight into Chopra near the end of the book during a closing interview. It struck me that rather than being the common-or-garden charlatan as I imagined he would be he seems to have absorbed the identity of being a 'seer' so deeply he acts as if he really were one. i.e. He believes his own hype & has become a parody of himself. I think the author picked up on this charade too.The irony is that as someone who burns so much fuel blowing hot air about 'transcending the ego' he regularly gets his knickers in a twist doing so -as can be seen in his own YouTube videos attacking the likes of Dawkins & Shermer. Seeing as he is a doctor it brings to mind the old proverb found in Luke 4:23 'Physician, heal thyself'

It made me chuckle when Chopra showed the author a photograph of him seemingly levitating. When asked to repeat this miracle he declined. - Funny that eh!

Was The Quantum Prophets worth the listening time?

If you are particularly interested in knowing about Richard Dawkins you would be far better served by reading his autobiography 'An Appetite For Wonder' rather than this book. If you want to see what makes Chopra tick I'd recommend watching Sam Harris burst his bubble in the YouTube video entitled 'Sam Harris Exposes Deepak Chopra's Religious Woo Woo'.Alternatively watch the debate in full where REAL quantum physicists admonish him for his misleading claims & suggestions. It would be quicker than reading this account which tries too hard to be even handed about a very unbalanced question which is: Can independently verifiable evidence for the supernatural be found or not? Dawkins: No. Chopra: Yes (but please don't pay too much attention to the whether my own 'quantum' claims have EVER been vindicated).

Reading this book one does get the impression that Dawkins is entirely closed to respectfully listening to spiritual / philosophical viewpoints & this could not be further from the truth. If you are in any doubt about this fact look up his YouTube interview with peace campaigner & philosopher Satish Kumar. Although Dawkins doesn't agree with his supernatural claims he is strongly encourages his pacifist ambitions & even says he would march shoulder to shoulder with the man in a campaign to promote human unity rather than the disunity religion instigates.The difference with Kumar over Chopra is he is driven by a desire to use spirituality as an end in itself rather than as a marketing opportunity. You only need to visit Deepak's website to see how many adverts there are selling every product under the sun to all & sundry. Satish on the other hand doesn't even have a website in his own name. He simply works as the editor for the organization 'Resurgence & Ecologist' magazine, an educational charity which simply promotes ecology & peace instead. That is why Dawkins has so much more respect for the man than he has for Chopra.

Thank you for a superb analysis & synthesis of two contemporary giants of the search for knowledge of the (S)elf.

Author wrote this book to attack individuals such as D. Chopra.

Author on a hate and diss mission against individuals such as Chopra. Wish I hadn't purchased this mess.

Chapter 3 is pretty good because it discusses the life of Richard Dawkins. So chapter 3 gets 4 stars.

Chapter 4 the author scores some points with me after questioning why Chopra makes so much from his scientific/spiritual products. And in chapter 4 the issue of "meaning" and people's need for it dawns on me. Can you be a mindful meditator without having a belief system or can you just consider it a useful behavioural modification technique?

Helped me to understand who Chopra is, where he stands with Christianity and his explanation of thought intermingled with God and science.

The narration was okay. Spoken as in reflective thought. It was okay as it has a pondering drawl to it that I think was intentional and is the technique the author wanted.

The subject material : This could have been shortened a good bit and still be on point. Still the same old story; materialistic versus dualistic (dualism) thinking. Nothing new was presented to me.

I am a Metaphysicist (Bachelor's of Metaphysical Science working on a Masters : (heavy on science and psychology.)) And I am still in the dualism camp. And too, somehow something of us survives a bodily death. Its nature is still elusive is my thinking.

This book does explore what is thought of this subject as it explores champions of both camps.