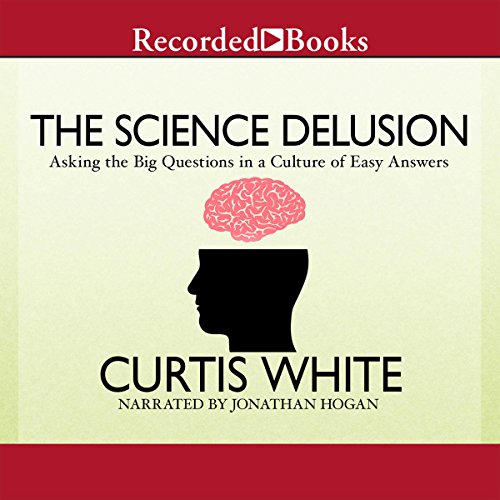 Asking the Big Questions in a Culture of Easy Answers
By: Curtis White
Narrated by: Jonathan Hogan
Length: 4 hrs and 55 mins
Categories: Non-fiction, Philosophy
5 out of 5 stars 5.0 (1 rating)

One of our most brilliant social critics - author of the best-selling The Middle Mind - presents a scathing critique of the "delusions" of science alongside a rousing defense of the tradition of Romanticism and the "big" questions. With the rise of religion critics such as Richard Dawkins, and of pseudo-science advocates such as Malcolm Gladwell and Jonah Lehrer, you' re likely to become a subject of ridicule if you wonder "Why is there something instead of nothing?" or "What is our purpose on Earth?" Instead, at universities around the world, and in the general cultural milieu, we' re all being taught that science can resolve all questions without the help of philosophy, politics, or the humanities. In short, the rich philosophical debates of the 19th century have been nearly totally abandoned, argues critic Curtis White. An atheist himself, White nonetheless calls this new turn "scientism" - and fears what it will do to our culture if allowed to flourish without challenge. In fact, in "scientism" White sees a new religion with many unexamined assumptions. In this brilliant multi-part critique, he aims at a TED talk by a distinguished neuroscientist in which we are told that human thought is merely the product of our "connectome," a map of neural connections in the brain that is yet to be fully understood.... He whips a widely respected physicist who argues that our new understanding of the origins of the universe obviates any philosophical inquiry...and ends with a learned defense of the tradition of Romanticism, which White believes our technology and science-obsessed world desperately needs to rediscover. It' s the only way, he argues, that we can see our world clearly...and change it.

If you like rambling non sequiturs, weaved together by lengthy quotations from obscure references about what other people have said about disparate topics, in a feeble attempt to further a vague thesis, a thesis which purports to be about science but, but is actually more about romanticism, and which does so with poor scientific rigor, this is the book for you. If you are looking for a reasoned inquiry into science's faults, you won't find it here. Narrator was good though.

White has done his research. That is what makes his blatant straw-men arguments so unforgivable.