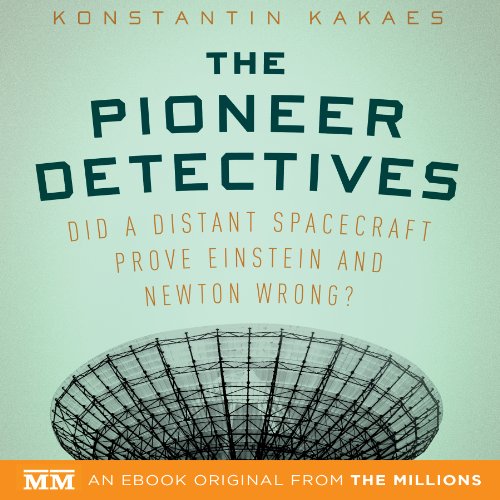 Explore one of the greatest scientific mysteries of our time, the Pioneer Anomaly: In the 1980s, NASA scientists detected an unknown force acting on the spacecraft Pioneer 10, the first man-made object to journey through the asteroid belt and study Jupiter, eventually leaving the solar system. No one seemed able to agree on a cause. (Dark matter? Tensor–vector–scalar gravity? Collisions with gravitons?) What did seem clear to those who became obsessed with it was that the Pioneer Anomaly had the potential to upend Einstein and Newton—to change everything we know about the universe.

With riveting prose and the precision of an expert, Konstantin Kakaes gives us a scientific police procedural, tracking the steps of those who sought to unravel this high-stakes enigma. His thrilling account draws on extensive interviews and archival research, following the story from the Anomaly’s initial discovery, through decades of tireless investigation, to its ultimate conclusion. The Pioneer Detectives is a definitive account not just of the Pioneer Anomaly but of how scientific knowledge gets made and unmade, with scientists sometimes putting their livelihoods on the line in pursuit of cosmic truth. Perfect for fans of John McPhee, Thomas Kuhn, and Ed McBain, this is also an immensely enjoyable story accessible to anyone who loves brilliant, fascinating long-form journalism.

I love science. The never ending chase for truth, even as it lies just beyond human grasp, is a fireplace for the imagination.

The theory turned out to be fatuous. there was no story. it was all interesting theories until the end when it all dies of data errors. who would write a book about errors and why? I dont get it. the satellite was a tremendous story in itself, why spoil it with what turned out to be bad science after all. maybe for those there at JPL it was the excitement of the hunt, but when there's no stew in the pot at the end, what then is the story about?

What was most disappointing about Konstantin Kakaes’s story?

the book as good ones but is completly outdated

not sell outdated books pls, in this topic science catched up long ago already