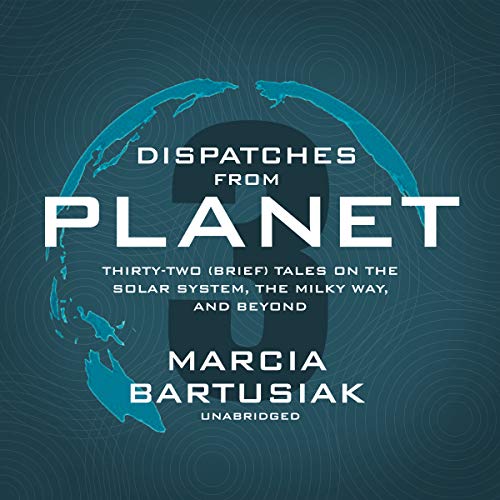 Thirty-Two (Brief) Tales on the Solar System, the Milky Way, and Beyond
By: Marcia Bartusiak
Narrated by: Gabra Zackman
Length: 6 hrs and 10 mins
Categories: Non-fiction, Astronomy
4 out of 5 stars 4.0 (1 rating)

The galaxy, the multiverse, and the history of astronomy are explored in this engaging compilation of cosmological "tales" by multiple award-winning science writer Marcia Bartusiak. In 32 concise and engrossing essays, the author provides a deeper understanding of the nature of the universe and those who strive to uncover its mysteries.

Bartusiak shares the back stories for many momentous astronomical discoveries, including the contributions of such pioneers as Beatrice Tinsley and her groundbreaking research in galactic evolution, and Jocelyn Bell Burnell, the scientist who first discovered radio pulsars. An endlessly fascinating collection that you can dip into in any order, these pieces will transport you to ancient Mars, when water flowed freely across its surface; to the collision of two black holes, a cosmological event that released fifty times more energy than was radiating from every star in the universe; and to the beginning of time itself.

This is an interesting ramble through modern theories of cosmology consisting of loosely connected essays on individual themes. Sometimes they overlap - some clearly date pre 2000 - but give an interesting insight into the subject matter though some topics eg time in the context of quantum mechanics were beyond my comprehension as a non scientist. I will listen to this again.
The reading I found somewhat bizarre. The narrator’s default voice was pleasant and expressive. However, and for no reason based on content although often at the beginning of a sentence, she resorts to a grating mechanical delivery like a demented dalek before returning to her normal tone. Distracting!

Great for basic knowledge and history

If you have no idea who wrote the equation for gravity then this book is for you. I thought since the book is a new release I would learn some of the latest concepts coming out of the physics world, but i didn’t hear anything i haven’t heard before. I was completely disappointed. So it may be enlightening for some who are starting with the basics, but if you know who Steven Weinberg is you defiantly won’t learn anything from this book. The presentation/entertainment value is slightly above average, but the author seems to be hung up on women’s discoveries, which i personally don’t put much stock into someones gender for making a discovery, i give them kudo’s for their intellect and insights, no matter who they are. I feel i waisted a credit, but i’ve heard all if her information many times before,