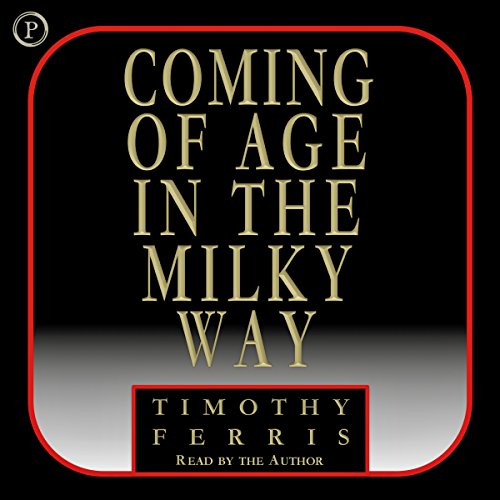 Coming of Age in the Milky Way

Humans have long sought to comprehend the enormities of cosmic space and time. Here, best selling science writer Timothy Ferris tells the story of that quest. He interweaves the majestic themes of astronomy, physics, religion, and philosophy with fresh and lasting portraits of the men and women who created what has been called our society's most precious treasure - its conception of the universe at large. Whether you're a scientist or a recreational stargazer, you'll delight in this compelling look at our search for understanding.
©1988 by Timothy Ferris (P)1988 Dove/Morrow Books on Tape, Inc.

"A remarkable piece of work." ( Newsweek)

What listeners say about Coming of Age in the Milky Way

Brief survey of discovery from Columbus to now

Ferris provides his reader with an extremely abbreviated version of discovery from Columbus through now. There are some aspects of his stories that are lesser known, which makes them quite enjoyable. The layout of the book is really great as well. Not too many books provide a summary of biology and physics in tandem. Adding to that, Ferris keeps each subject brief so that it packs as much information as possible, while remaining fairly uncomplicated. Considering all the positive aspects of this book, I can see why it received the accolades it did. However, historians must have a hard time reading this book. It's not that Ferris kept the descriptions of Newton and Darwin brief. It is more that his representations of the scientists seem to be under researched.

If Ferris is going to portray various scientists in a manner that is far different from how just about every other author, whose life work has been to study the biographies of their chosen scientist, has portrayed these scientists, then he is going to need to provide some proof for his alternate version of their personalities. For example, according to Ferris, Newton was humble, didn't care about fame, and instead cared only about the work. This would describe Darwin but not Newton. When describing Newton's reputation as a "monster", Ferris seems to misunderstand why people called him that. His depiction of Darwin was equally naive.

Writing books that are short, easy to understand, and not overly complicated are essential in helping scientific information disseminate into the public at large. Anytime writers choose brevity over jargon-laden prose, a book always trades a bit of accuracy for relatability. That is par for the course. So, my critique is not coming from an ideology that believes books should be both brief and extremely accurate. However, they should strive to be as accurate as possible, not just in relating the science itself, but in portraying the scientists' personalities. If an author does not know enough about the life and personality of the scientists, then the author should just leave them out. It's preferable to an inaccurate portrayal.

I bought this under the impression that it was the complete book, however I soon discovered that it skips a massive amount of information.

Nice but too concise

Nice listening, but somewhat too concise for my liking.

Think about mankind and the future

This is a well-prepared set of reviews of the origins and future of the earth, the universe and mankind. I found it hard to turn off at the end of my journeys in my car. It really makes one think, and at times say wow. There are a few sections where I wanted to go back and listen to a passage a second time, but due to the division into tracks, I had to go back much further than desired. I will listen to this one several times.

This is only a fraction of the complete book. I wasted my credit because there was no indication of this. I had hoped to use this to jump back and forth between audio and dead tree for efficiency because I was reading it for a class. Audible should clearly indicate when works are abridged. I’m annoyed.

I liked this book. The author does a good job reading the book and the content is easy to follow. I was disappointed to find that most of the content of the book was repeated from his other works. I think the book is good but I think that Redshift would be a better value for your money.