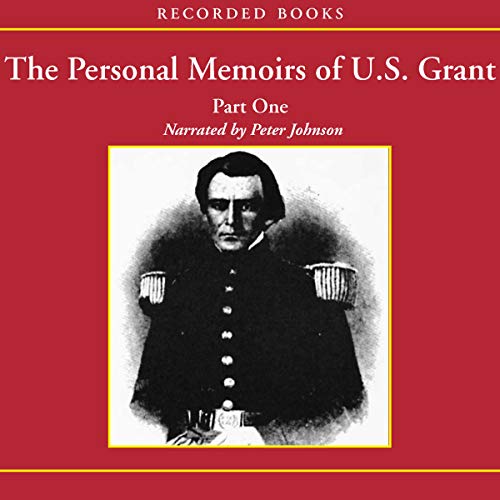 By: Ulysses S. Grant
Narrated by: Peter Johnson
Try for £0.00

According to many historians, Ulysses S. Grant’s accomplishments as the 18th president of the United States were surpassed by his deeds as a Civil War general and a writer. In The Personal Memoirs of U. S. Grant: Part One: The Early Years, West Point, Mexico Grant’s literary gifts are displayed as he speaks about his military campaigns.

First published in 1885, this book covers Grant’s childhood and military training. Many listeners will take greater interest in passages on the Civil War. Grant writes about these military campaigns with eye-opening detail and offers his insights on contemporaries like Abraham Lincoln and General Sherman.

With a deep, resonant voice reminiscent of a newscaster, Peter Johnson intones Grant’s words with authority.

Ulysses S. Grant, 18th President of the United States and commander of the Union forces in the Civil War, tells the story of his life in his own words. In this opening volume, Grant covers his early years, including his time at the U.S. military academy at West Point and his service during the Mexican War under Zachary Taylor. Grant wrote his memoirs in order to rescue his family from debt and they were published as he lay dying of throat cancer. Today, they are an American classic.

U.S Grant: A Man of Intelligence and Dignity

The memoirs (all three parts) increased my respect for Grant, who emerges in his memoirs as a man of exceptional honesty, intelligence, and genuine concern for his fellow humans. It makes me feel good about my country to learn how much Grant despised slavery while he always shows respect where respect is due, even for his opponents. As for the reading, it was well done, but somehow I missed the tone of Grant's own voice. I guess I would like an Illinois voice (being a fellow Illinoisian) or even a Mark Twain voice rather than the very cultivated voice of this reader.

Not professional in terms of writing style but excellent in getting a glimpse of the person writing... simple - straight forward - matter of fact. This must have been the style of a humble yet successful general.

If you could sum up The Personal Memoirs of U.S. Grant: Part 1: The Early Years, West Point, Mexico in three words, what would they be?

I will have to confess to a rather pronounced lack of interest in our history until I recently read John Adams by McCaullegh, which left me with a remarkable interest in the founding of our nation. I was then led to the Eminent Lives collection with short histories on Jefferson, Washington and Grant. I would never have put Grant with those two and had little interest in Grant. However, I found Grant absolutely fascinating, and thus my interest in this volume in which Grant recites so much about what was going on in the USA at the time of the Mexican War and his exploits in that war. I am now proceeding into Grant's second volume, which I expect to be even more exciting than the first.

Which character – as performed by Peter Johnson – was your favorite?

Great book, easy to listen to

I'm really enjoying part 1. The writer is so unassuming, so down to earth. You'd think he was part of the "slacker" generation who just "happened into success." The reality is that Grant was least likely to succeed. His stories about the Mexican war, and the politics behind it give a better 1st person narrative of the times than current history books on the same period. I really liked the guy as I listen, and the narrator is pretty easy to listen to also. Proved the old adage that providence plays a part in the affairs of life.

A good overview of Grant's war

Grant's memoirs are considered the most readable, concise and approachable war memoirs ever published in any era. I'm finding this to be true. His language is surprisingly modern, and Grant has a habit of reminding you who people are when they are re-introduced several pages later -- it makes the overall feel of the book one of a narrative rather than a history.

The narrator, though somewhat bland, suits his source material rather well, and doesn't distract much from the book.

I'm disappointed that they've broken up Grant's memoirs into three separate audiobooks, but I can live with that thanks to my subscription. If you want excruciating detail about the Civil War, buy Foote's histories. For a broader overview of Grant's war, with the perspective of the commanding General, read these memoirs.

With few words his message was clear and concise. Love the books on the presidents as my American History knowledge is gaining with every book I listen to.

This is one of the most pleasantly surprising books I have ever purchased. I finished "American Ulysses by Robert C White" and was so impressed purchased Volume 1 of this three volume work. The man writes like Mark Twain, packs so much time, humour, travel and genuine inforormation so easily I finished it wanting more.

Further, I learned more about the causes of the war in the last half hour as the previous 50 years. For instance, Texas was recently secured with national blood and treasure, included more land area then almost every nation on earth. Yet it become a slave territory of little population succeeding into The Confederacy. Further, confederate sympathizers managed to disburse military and other assets out of Northern control.

What was one of the most memorable moments of The Personal Memoirs of U.S. Grant: Part 1: The Early Years, West Point, Mexico?

All those things were interesting, However, the last chapter was invaluable for my understanding what motivated the North so vehimently. This had long been something of a mystery to me.

Tone and pace match the pace and humor of the text.

No particular episode rises significantly above the general high litterary, historical and iformational presentation. One surprising feature of the style is its lack of any sort of combat melodrama or self conscious gravity. And this volume includes noteworthy millitary drama behind the steady narrative.

I am dissappointed Grant has so consistently been portraid as something of a ner do well looser. For instance, prior to the war he was a "clerk" in his fathers store. I never knew his father had that store as an absentee investment. Grant aways presents himself as comming from modest priviledge, and though he often uses self depricating humor he gives no evidence of any terrible decline in fortunes during his pre war endeavors.

Must read for Civil War readers

Yes, who better to write a book about the Civil War than Grant. I Recommend all three volumes of his book.

This audiobook is amazing! It is an autobiography of Ulysses S. Grant. Mr. Grant was made a General and President for a reason. His language is eloquent and witty. His life was quite interesting. Peter Johnson does a great job narrating. His voice is soothing, his rhythm is excellent, and his timing and tone are perfect. Very young readers might get bored with it. However, I highly recommend this audiobook to any person of any age. Thank you and enjoy!

Clear and concise. The writings of a profound man and underappreciated leader. It is time to correct the 100 year old Lost Cause propaganda which turned Grant into a drunken, corrupt slave owning looser, and General Lee into a hero.