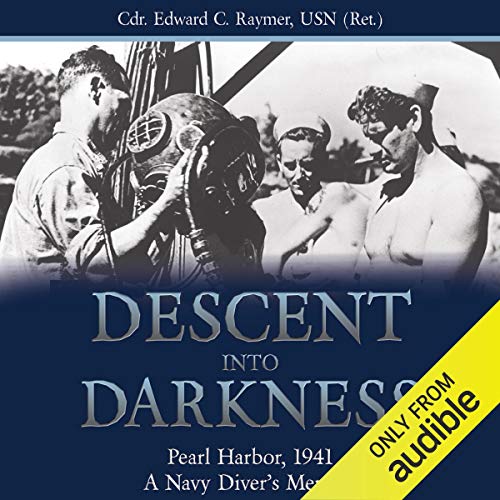 On December 7, 1941, as the great battleships Arizona, Oklahoma, and Utah lie paralyzed and burning in the aftermath of the Japanese attack on Pearl Harbor. A crack team of U.S. Navy salvage divers headed by Edward C. Raymer are hurriedly flown to Oahu from the mainland. Their two-part orders are direct and straightforward: (1) rescue as many trapped sailors and Marines as possible, and (2) resurrect what remains of America's once mighty pacific fleet. Descent Into Darkness tells their story.

What listeners say about Descent into Darkness

I can’t even finish this book with only 2.5 hours left. I bought this book based on two things; Ian Toll referenced Cdr. Raymer’s experiences at Pearl Harbor in Pacific Crucible which fascinated me and the Audible reviews for this book were all good. So, even though I felt from the audio sample that the narration was monotone I was hoping the story would make up for it; it didn’t. The narration goes beyond monotone too purely mechanical within a few minutes and becomes nearly unbearable. It doesn’t grow on you and it doesn’t get better with time as some do. I held out hoping that a story would be told that would captivate me and keep me going, but that didn’t happen. After listening to Peter Johnson on other samples I’m convinced that it’s the book’s writing more then the narrator that makes me write this. No narrator could make this book better and that’s a truly hard thing to say about such a topic.

The book starts out fairly good when he starts describing the attack on Pearl Harbor and the diving, but it quickly devolves into a series of unnecessary, uninteresting and disconnected stories about how he and his fellow divers try to build stills, obtain alcohol, woo waitresses, or visit prostitutes. By the fifth hour the book goes even further with a pointless anecdote describing the sound of the bedsprings squeaking after “Joe had mounted Thelma and was banging away solidly” while another diver looked on. This was yet another tale that lent absolutely nothing to the overall story and brought no context to the larger events whatsoever. Occasionally, in between things like explaining how the war liberated Hawaii’s hookers from their madams, the book does talk about diving on one of the warships in the harbor. It gives a snippet of a story about the USS Nevada or USS West Virginia, but then it jumps in the next paragraph right back to another story of the off duty vice of the divers. Yes, when he’s actually talking about the diving it’s very interesting and very sad and it brings you into the situation, but these points only cover about half of the book; maybe. I appreciate the work all the divers did in Pearl Harbor, but I can’t be sympathetic about the stress they were under which caused them to worry about how they were going to get drunk or have sex when men like my father were languishing in the jungles of Asia and other men were being depth charged on subs, or attacked by dive-bombers on a daily basis.

Granted, it does say “A Navy Diver’s Memoir” so I get that some of the story telling will be disconnected, but this is not a good book. I don’t like being so harsh for such a brave man, but it would’ve been better if he had used a ghostwriter or a biographer to tell his story. I think that could have produced a very good book.

I first read this book back in the summer of 1996. Since then, I had lost my copy and was very pleased to see that they have published more now. It is as fasinating and informative now as it was back then. As a naval history fan, this book is one that really filled in what happened after the bombs stopped falling. I cant imagine what it must have been like for the men who lived through the events Mr. Raymer writes about. He really conveys the experiences and makes you feel like you are there next to him trying to make your way through complete darkness knowing that the bodies of your fellow sailors surround you. Mr. Raymer is not only an outstanding man for the work he did during the war, but also as an author, who 72 years later still keeps history alive.

Very well written and narrated, If I closed my eyes I felt like I was in some of these situations.

A story for Navy Divers

Being a Navy Diver for over 30 years, I can really appreciate the stories as told by Ed Raymer. I think to fully understand and enjoy this book, it really helps to have been a Mk V diver, and experience the challenge of the dive rig and working inside sunken ships and on hogging lines. Definitely not a literary masterpiece, but a great Navy story!

I'm a commercial welder/diver currently working on repairs to the USS Missouri right near the Arizona. I'm thoroughly amazed by what these men were able to accomplish in those conditions, with the technology of the period, and in such a short amount of time.

As a commercial driver I want to thank you

This is an excellent book for any history buff or anyone looking to be come a commercial diver. A lot of the technology developed in this book are still used today. Well done Diver

The story: Clearly, Edward Raymer as a USN salvage diver at Pearl Harbor has had interesting experiences and I'm glad he wrote a memoir. I do wish he had worked with an editor more to fashion a more coherent, flowing narrative. What we have instead is primarily a series of vignettes which are mostly interesting. I wasn't as interested in those aspects of the story about wooing women in Honolulu. If these episodes had culminated in meeting his future wife and living happily together ever-after, they might have been more appropriate. As it was, they seemed more like distractions from the main body of the book, which concerns naval salvage operations, primarily but not exclusively at Pearl Harbor. I will grant there was some good comic relief involved in these episodes, even if one of the episodes essentially involves an attempted rape by one of Raymer's fellow divers. Different times. The narration is certainly bold and clear from an auditory perspective. You could listen to the book with an air compressor running in the next room, given Peter Johnson's hearty delivery. What Johnson's performance lacks is a sense that he brings forth the character of the author who has written his book in the first person. Instead, Johnson cheerfully booms along through the whole book without much in the way of dynamics or feelings. And yet despite these minor shortcomings, I did enjoy the book and finish it. The subject matter of naval salvage operations is inherently interesting. It is unusual, dangerous work, and the work that these men did was no doubt a great contribution to the war effort, and that makes it worthwhile.

It’s amazing to listen to a true story of the accounts of divers during the war, specifically in Pearl Harbor and the Pacific. I would assume a lot of people have never thought or heard of these men and their dangerous tasks of raising battleships and repairing other vessels. The grim details of what the inside of these battleships looked like shortly after the attack on Pearl Harbor stunned me. Next time I visit Pearl Harbor, these men in particular will be the first thing on my mind and all those that perished that tragic day.

I enjoyed the story, however it was difficult to keep up because the narrator was horrible.

i prefer a narrator who inserts him/her self into the story and reads like the subject in telling the story.