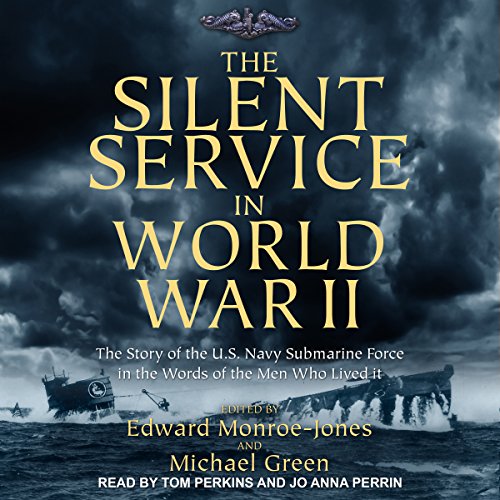 When the Japanese attacked Pearl Harbor on December 7, 1941, the US Navy had a total of 111 submarines. However, this fleet was not nearly as impressive as the number suggests. It was mostly a collection of aging boats from the late teens and early twenties, with only a few of the newer, more modern Gato-class boats. Fortunately, with the war in Europe was already two years old and friction with Japan ever increasing, help from what would become known as the Silent Service in the Pacific was on the way: there were 73 of the new fleet submarines under construction.

The Silent Service in World War II tells the story of America's intrepid underwater warriors in the words of the men who lived the war in the Pacific against Japan. The enemy had already begun to deploy advanced boats, but the U.S. was soon able to match them. By 1943, the new Gato-class boats were making a difference, carrying the war not just to the Japanese Imperial Navy but to the vital merchant fleet that carried the vast array of materiel needed to keep the land of the Rising Sun afloat.

As the war progressed, American success in the Solomons, starting with Guadalcanal, began to constrict the Japanese sea lanes, and operating singly or in wolfpacks, they were able to press their attacks on convoys operating beyond the range of our airpower, making daring forays even into the home waters of Japan itself in the quest for ever more elusive targets. Also taking on Japanese warships, as well as rescuing downed airmen (such as the grateful first President Bush), US submarines made an enormous contribution to our war against Japan.

What listeners say about The Silent Service in World War II

Good at what it does but little context provided

This is a series of biographical clips, many of them interesting and many giving the feeling that much is still missing. The description of a crossing the line ceremony is very good. The big problem is you can't fit the stories together into the wider historical war in the Pacific. A little more history would have gone a long way to making this a better book.

Different than I thought but great.

Each chapter is a story from an individual submariner. It was quite interesting, very informative, and in some part funny. Definitely worth the listen.

The most interesting passage in this book comes in the last chapter, when the crews return to California to deliver their subs to the ship breakers. The sailor who wrote that chapter tells about his Chief of the Boat asking him if he might want to make a career in the Navy. He dutifully says he might, even though he's no longer sure. Maybe one reason is the COB sitting on a bunk before him, this grizzled warrior now smelling of liquor and evidently dreading peacetime life.

The narrator ends with a description of heroic sub after sub being hauled off for scrap. The civilian breaking crews stand on the decks, smoking. The wartime sailors watch their boats from the shore for a while, then walk away.

I learned something about loss in that chapter. It was a little like Audie Murphy knowing he's good with an M1 Garand, but wondering what he's going to do with that skill now that the fighting's over.

I'm sure these sailors went to Hell and Back, too, but for most of the book, you'd never know it. Most of them don't seem to let the reader too deeply into their experience. Maybe it's the pervasive use of the passive voice. People don't seem to do much. Things happen to them, or around them, things that they describe as mildly interesting spectacles. Or maybe it's the editors imposing an oddly flat style to what should surely be gripping stories. Here are young men being depth-charged, or surfacing in the middle of a convoy with all tubes firing, or getting left on deck by mistake when a sub has to dive in a hurry, and it's all oddly uniform in its lack of engagement.

If I had been one of those sailors and had tried to tell what had really happened only to see my story polished flat by the editors, I'd be pretty angry. I can't imagine setting out to tell a story that was important to me and using such lackluster language, working so hard to keep my experience at arm's length. I think I'd either keep my mouth shut, or I'd tell what it was like.

I didn't want blood and thunder. I wanted truth. Most of the time, I got reports.

Was expecting stories of war patrols not anecdotes about peripheral items attached to a submarine basis.

Voice far too pedantic and precious for nature of story

As indicated in the title of my review, the voice register in this book is far too pedantic and precious for the nature of these 1st person short stories. Otherwise, is interesting.

For the real story by real people (not historians)

Very informative! This is 49 short stories written by the men who actually served. Much better than a "lecture" by people who have only researched these things.

There are many individual’s stories covering a wide rage of time though the war. Good narration.

I love history books and especially ww2. This one is very well delivered and keeps you interested. It’s a collection of small stories, but with enough background on each to make fir very interesting listening. Highly recommend.

This book is a compilation of accounts by sailors on various submarines during World War II. Each chapter is a separate vignette of mostly mundane observations by sailors without a large picture of what is taking place. There’s no sense of action or excitement throughout the book and the common thread is simply that each writer served on a submarine. Many of the accounts appear the be rewritten to try to create a narrative, but the total effort falls short of being remotely interesting or informative. The narrator reads through each of the accounts without bringing any to life. Sadly this book is a total waste of time except perhaps for the most ardent reader among submarine veterans or their families.

Made me feel happy and sad at the same time. Thank the men and lady for sharing.

An interesting approach to capturing the essence of Submarine service thru multiple individual stories told in “their own words”. It got better as the story progressed.