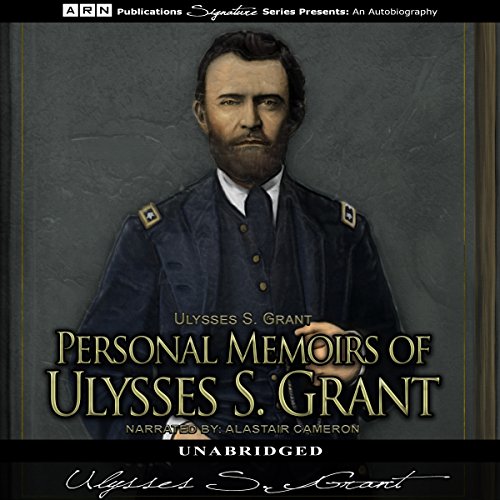 Written from his death bed, The Personal Memoirs of Ulysses S. Grant are written by the most well known Civil War General himself, Ulysses S. Grant. In a review of his life as a private citizen, as well as a general, Grant lets the listener know what a heroic figure he really was.

Like so many men before him, Grant describes being pressured into a certain way of life by his father. He never aspired for a military career, but his father insisted on West Point Academy for his schooling. Grant takes us through the Mexican-American War, his short retirement after the war, and his involvement in the Civil War. He points out specific historical figures that directly lead to successes and failures in his military career.

Grant also immerses the listener in battle scenes that leave you visualizing an old western movie. His depiction of the war leaves an impression as he goes into deep details about the little parts of daily life in the military, like the food, supplies, and ammunition wagons that delivered their goods to them. Grant gives intellectual commentary on why he believes the Civil War happened, why the South was doomed from the beginning, and surprisingly, how they were all the better for it in the end.

Would you listen to Personal Memoirs of Ulysses S. Grant again? Why?

I am not certain, the book is very linear and fact based. On one hand it is apparent that Grant was not talented with rhetoric. On the other hand the book presents a wealth of knowledge and a prospective I wouldn't otherwise be exposed to.

The narrator did an excellent job of elocution, and pronounced the names of many places phonetically correctly. However, in American English the spoken names of many places vary from the phonetically correct. American English is my primary language and I found this 'correct pronunciation' incredibly distracting and quite grating to hear the names like the Army of the Potomac, Maryland, and many other places pronounced in an atypical way. I don't begrudge the narrator, but I am spending a large percentage of this book thinking that's not the way we say that in America, as instead of to listening to content of the book.

11 of 12 people found this review helpful

Great source of information on the Civil War

The story was great but the performance was almost unbearable. Needs to be redone. Far too many mistakes in pronunciation.

Reader with an English accent?

Who would you have cast as narrator instead of Alastair Cameron?

Someone with an American accent. Hadn't realized I was downloading this version, read by a man who does not know how to pronounce U.S. cities, including the city where Grant lived before the war.

5 of 8 people found this review helpful

Narrator sounds like a computer. He's awful. Not intonation--just drones on and on. I'm switching to the other version of this audio book that's available on audible.com with a different narrator. I hope he's better. I could take more than four chapters of this guy.

The actual book, written by US Grant is very interesting.

5 of 9 people found this review helpful

It is long and tedious but intriguing

As any historical recount, it requires attention to listen to the bombardment of facts, but if you’re already studied in the Civil War battles, you will not be lost.

Classic: inside the mind of the greater general

Grant had a clear vision of destroying his enemy's ability to fight, & that a draw would represent a victory for his opponent.

The oratory was terrible. A nasally European should not have been chosen to read this book. Several times I wanted to turn it off because I could not stand to listen to the monotone reading. chose another audio version of this book because this narrator of this version could put you to sleep.

Would you consider the audio edition of Personal Memoirs of Ulysses S. Grant to be better than the print version?

The details and behind the scenes observations.

If the narrator had researched the proper pronounciations for the places, it would have been a more pleasurable listen. Errors: Shiloh - Shelo, P.T.G. Beaureguard - Booregard, Appamatox - Appotamax..

Where does Personal Memoirs of Ulysses S. Grant rank among all the audiobooks you’ve listened to so far?

For me it was the reconstruction of a historical figure I thought that I knew something about.

The narrator was truly gating. How can you be paid to narrate the book and not bother to look up the how to pronounce the American place names and surnames? Shiloh, Appomattox, far too many to note here. I can't believe it was released this way. Would you narrate English history and mispronounce "Thames" river? Every time?

The history as told bt Grant

Was Personal Memoirs of Ulysses S. Grant worth the listening time?

Yes - This was, however, the longest I have ever taken to listen to a recorded book. This guy sucked as a narrator.

1 of 5 people found this review helpful