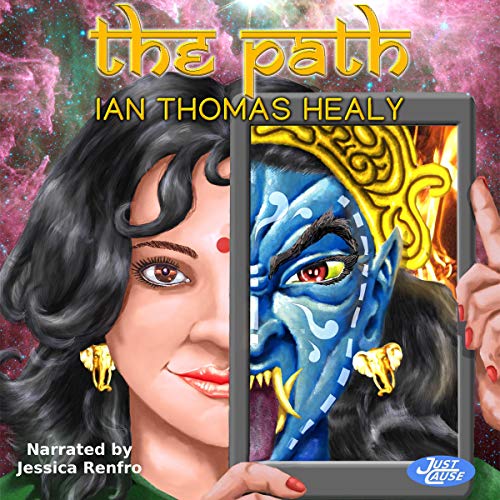 Trapped in the game.

Vanitha is the world's greatest parahuman hacker and can physically enter computer systems to control them from the inside. To relax, she's created a Hindu-themed multiplayer online role-playing game called The Path. When a mystery presents itself, she goes to investigate the strange new Malevolence. It kills her.

She awakens inside the game as a new character, unable to use her parahuman powers to return to the real world. Nor can she access any of her administrative privileges. She can't even speak her own name. With no other options, she embarks upon a desperate quest to locate her body, a corpse run that may present her only chance to escape.

All the while, the Malevolence is spreading like a cancer, rewriting and corrupting the game. It's a speedrun where failure will be lethal: get her body and her powers back before the Malevolence destroys the game and everything inside it - including her.

Another new approach to Just Cause Universe

Besides the books featuring the main Just Cause team, the author has already released a book where they were not the focus and this is another one like that, except this time round he takes a further step away from his usual pattern with this one being more like Gameit or litrpg than the superhero genre of the others.

This approach works well with the nature of the powers of Vanitha who isn't really a superhero despite her having powers and having previously appeared in other books in the series, the challenges she faces while trapped within this game also cause her to question herself and her actions, which isn't an uncommon theme in this author's work.

This book also sees another new narrator take over the reins of the series and while a good job is done overall, a little more energy to the narration would have probably improved this book even more.

Overall, an entertaining instalment in the series and I hope that the author returns to this character again, either in another book of her own or with her making more than a cameo in one of the main team books.

This book was different from my usual choices but I was intrigued by the promo. It turned out to be an interesting diversion taking me into a world I could never imagine. The narrator was engaging and amazing in her use of different accents.

Was very impressed with the Hindu slant to this story. Showing a different take on progression. Jessica did a very good job at bringing this cast to life and making you believe in the very well presented world. I was given a free copy of this audio in return for an unbiased review.