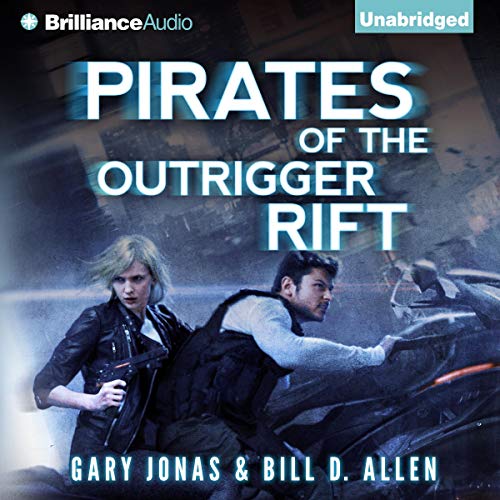 Pirates of the Outrigger Rift

When the security director of the powerful corporation Nebulaco dies under mysterious circumstances, courier Sai Collins has one last top-secret delivery to make on his behalf. Sai has come a long way from her street-kid childhood, but she has her secrets - namely that she’s a cyber-psi, a computer telepath who can connect to the grid without hardware. A talent she’s going to desperately need.

Because when she arrives at the drop point on a neighboring planet to make the delivery, she’s ambushed by heavily armed goons and barely escapes with her life. Sai soon realizes that she’s in the middle of something far more complex and far-reaching than she ever imagined, and if she’s going to make it out of this alive, she’ll have to turn to a couple of unlikely heroes: The charming, down-on-his-luck pilot Hank Jensen and jaded private investigator Mike Chandler, who follows no one’s rules but his own. Their mission: Take down the most dangerous pirate in the galaxy.

What listeners say about Pirates of the Outrigger Rift

Really enjoyed the story and characters, but wish there was more books in this universe.

Pirates of the Outrigger Rift
By: Gary Jonas, Bill D. Allen
Narrated by: Kate Rudd
This was an action packed, fast paced, science fiction book by one of my favorite authors but it didn't have the zing his others had. It was certainly good and I enjoyed it but it wasn't super awesome like all his others. Worth the read or listen.

Interesting. I like the storyline. Well written Kate Rudd reformed all characters well with male and female voices well distinguished. I hope this is a beginning of a new series in the space opera genre. Worth the credit!

Nice easy listen for fun campy pirates in outer space, Narrator does a good job with male and female characters