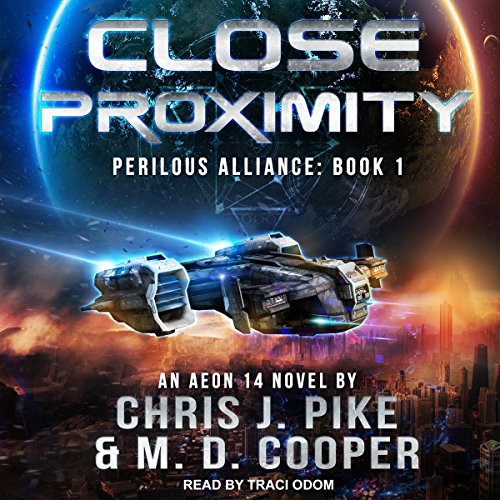 Kylie Rhoads is a junker. She makes her living traveling the stars, salvaging abandoned ships left over from pirate attacks on the edge of the Gedri system. Some of the hulls are legal for the taking, most aren't.

When a salvage job goes bad, Kylie finds herself on the wrong end of a gun. The hand holding that gun? The SA Space Force, just the people Kylie wants to avoid. To avoid prison, Kylie makes a deal to go deep into the Gedri System and rescue a simple girl. But out on the fringe, nothing is as it seems.

With her ex acting as the military liaison, Kylie takes her crew on the most dangerous mission of their lives. Rescue the girl, defeat the crime syndicate, and pray the military holds up their end of the bargain.

What listeners say about Close Proximity

Fairly good story, nothing amazing though. The narrator was awful, sounding like a female robot. I don't know what her day job is but she should stick to it, this voice acting is not for her.

I'm really disappointed with this book, earlier work was good but this is all smut.

A fun entry in the Aeon 14 Universe

Close Proximity introduces a new crew and captain to follow. Really enjoyed this story and look forward to listening to more.

I stopped listening early when it turned to smut

A female captain and her lesbian lover. She dominates the men and every thing seems to be about sex. Is there anyway to get my credit back?