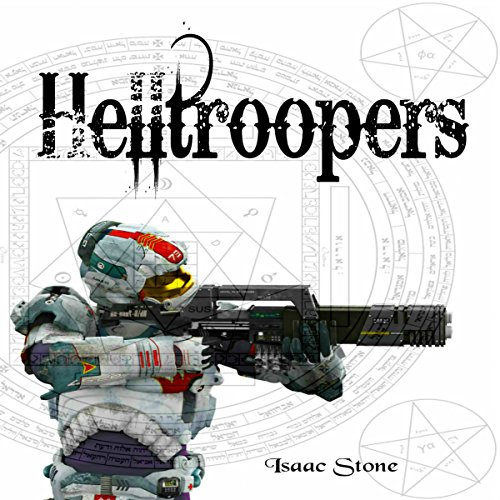 Strap on your power armor and get ready to fight like hell.

Ash Wednesday and his crew of corporate space marines take work as bounty hunters tasked with taking down the deadly fugitive named Simon Haddo, a mad scientist with an occult obsession and the most infamous terrorist in the system. As they track him through the depths of a gruesome space station, the mercs of Team Omega soon find themselves drawn into a galactic conspiracy bent on creating a literal hell on earth in this violent sci-fi remix of Dante's Divine Comedy.

What listeners say about Helltroopers: A Paranormal Space Opera Adventure

This was a good imagining although very well written i found it a little dragged out and it fell flat in some areas. overall the story was worth a listen but not sure if i would buy it full price on kindle. The narration was excellent and I feel lifted the story up a notch so hence the 4 star rating. This would not put me off any of Isaacs further works but make me investigate further into it whilst I would actively look at further narration by Persephone.
I asked for this audio and have left my thoughts on this for you to peruse.

Enough with the symbols, people.

Helltroopers is, as the author explains in a preface, a modern science fiction reinventing of Dante's original hell book, Inferno and as such proceeds in a slightly different way from most action stories today. The reader follows Ash and his Omega Team from the independent gun ship Thelma in their pursuit of a long disappeared mass murderer named Haddo with the assistance of a mysterious woman, believed to be an android, who joined their ship at the completion of their last mission to destroy some space pirates. The Corporation job had seemed to be virtually impossible but the money was far too good to turn down. The Team would come to regret their acceptance of the mission. Landing on the asteroid which is Inferno Station, they make their way through various hellish layers, constantly fighting to stay alive.

The book is action packed as Team Omega try to apprehend their quarry. Each team member is nicely introduced with background information but thereafter there is little further character development. Fortunately, narrator Persephone Rose is able to breath life into the individuals with a distinctive voice for each as well as for the additional characters, such as Char, the ship's AI, the talking head from the Corporation and the enigmatic newcomer, Barbara Ann. The performance is excellent with the text read with feeling and enthusiasm, well paced and pleasant to hear. It is this narration which, for this reader, drove the story forward. Occasional sound effects also add to the atmosphere.
.
My thanks to the rights holder of Helltroopers who, at my request, freely gifted me a complimentary copy, via Audiobook Boom. Exciting action but something doesn't feel quite right, possibly because it's a modern treatment of Dante's Divine Comedy

Wow! This was unlike anything I've listened to before, and I enjoyed it a lot!

Fun action-packed story kept me interested from start to finish - well written by Isaac Stone and beautifully narrated by one of my favorites, Persephone Rose.

Helltroopers! I don't know much of Dante's work to comment on the comparison, but loved it just the same :)

I like this more then I thought I would. I have read another book similiar to this one but I felt this author did a better job. There is plenty of violence and a little profanity. This is a box set of the series. I expected one book but it turned out to be short stories of the series in one. I actually liked this. You can stop when one is finished and move on to the other when you felt like it but it is also good to have them all in one audiobook.
The plot I actually liked and I found it intriguing. My only problem is the main characters love interest at the beginning of the book I found it hard to believe. If you love someone you would keep in touch, not so in this case and he was really hurt when he found something about her which I found really hard to believe. But other then this I really liked it. It is fast paced with plenty of action.

wow! that was an interesting listen

I haven't listened to many paranormal books, but add some sci-go and I'm game. the format added an an extra incentive to try it. I liked the characters and the narration was decent, but its the application of future science that I liked the most. having said all that I need to inform you that I requested this audio from the author/publisher, and agreed to voluntarily leave my review.

I immensely enjoyed this trilogy's unique combination of fast paced science fiction being blurred with paranormal elements. The author's incorporation of a real 16th-century occult language into the series was a particularly nice touch in adapting The Divine Comedy to a science fiction setting based Earth's history. Persephone Rose's narration really captures the action and bizarre paranormal aspects encountered by the team the story follows.

So, this was an interesting book for me. I found that I really quite enjoyed the retelling of Dante's Divine Comedy as a sci fi tale. The narration is really fitting for the story, in my opinion. Persephone Rose's over the top style really made this a fun listen. If you like a good sci fi story, you should check it out.

Fun retelling of a classic

I enjoyed the heck out of this book. The author warns you up front that this is a retelling of Dante's Divine Comedy (The Inferno, The Purgatorio, The Paradiso) and that it doesn't follow a typical narrative arc for that reason. That might throw some listeners off, but didn't bother me, especially since I knew why.

Like The Divine Comedy, The Inferno is the most interesting book of the three, IMHO. It's missing the satire and political commentary of Dante, but that's ok.

If you aren't familiar with Dante, you'll still enjoy the book. But if you are, you'll really enjoy recognizing the references. Kind of like watching "O Brother! Where Art Thou" once you know it's based on The Odessy. I particularly liked the mob of accountants...

It was a pretty good story lots of action, Kept me entertained through the entire book. I am ready for the next book!
I was given this book for free but that did not reflect in my review.

Amusing, fast paced, cool characters and a great finish. This is 3 shorts 1 story. You'll enjoy this audio. Narrator did an excellent job.
This audio was given to me free, and I voluntarily gave this review.

As noted by the book's own description, this is essentially a space-opera retelling of the classic descent into madness. Our team of space marines are sent to capture a convicted war criminal, but that criminal has defended his home with strange, reality-warping equipment that, well, puts the marines through hell.

Rose once again delivers a good tone that kept me interested and engaged through the whole story.

Definitely a very different take on Dante’s inferno it has quite a bit of interesting twists and turns. A crew is tasked with finding a man that’s wanted by the corporation but they will have to go through literal hell to find him. Is this man what the corporation say he is or is he something different? There are parts I think could have been left out and some threads that could have been tied together better. I received this book by my request but all views are my own.