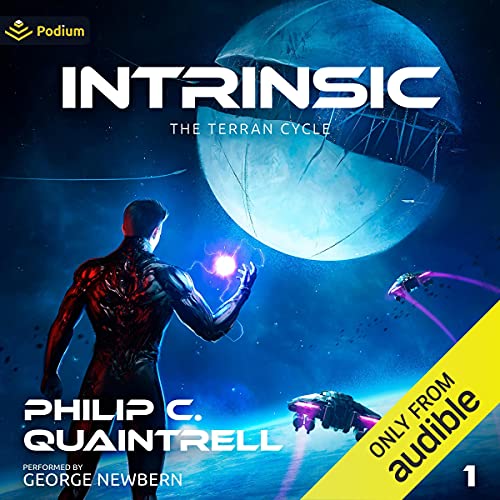 By: Philip C. Quaintrell
Narrated by: George Newbern
Try for £0.00

Kalian Gaines has a secret; he just doesn't know it yet. He looks like us, he lives like us...but he is not one of us.

Kalian knows nothing outside of his mundane life teaching history on 30th-century Earth, until a day like any other triggers a series of events that will tie his fate to that of humanity.

A human handprint, embedded into a rock with alien script, is discovered on a moon that mankind has never set foot on. This discovery holds a secret, which will sweep Kalian into the heart of a conspiracy that has corrupted the galaxy for 200,000 years.

What listeners say about Intrinsic

Earth and its only colony are destroyed, billions are dead, but it turns out one man has the immense potential to connect with all matter and energy and bend it to his will, if only he could find an ancient, sage-like being to train him to use the force... err whatever it is... and defeat the dark clad being with the monster sized ship capable of destroying entire stars. Yawn.

ENTHRALLING WHEN AT IT'S BEST

IN MY TOP TEN OF THE YEAR SO FAR,STARTS FAST WITH ACTION AND MYSTERY COMBINED,SLOWS DOWN A LITTLE TOO MUCH AT TIMES TO FILL IN THE BACK STORY AND INTRODUCE NEW CHARACTERS,IF YOU LIKE SPACE OPERA YOU WILL LIKE THIS,HAVE BOUGHT THE SECOND BOOK.

Gave up on this one eventually; a more boring book ...... which was not helped by the narration. In fact, it might have been more interesting if the narration had been better.

I'll admit to grabbing this book for three reasons, 1) the cover looked interesting (which made me look at it), 2) the synopsis sounded better than the average, and 3) I just really, really needed a good book.
Not the most promising of beginnings but Intrinsic delivered the unexpected. I was looking up Book 2 before i was half way through it. Again, great cover. The main character is likable enough, i spent the first half of the book wanting more info on him, then the second half realizing that more would have been too much. The story starts as one would expect: Aliens, Questions and a bit of "Why Me?" thrown in for a conversation starter, then goes from strength to strength after a rather earth shatteringly huge shock.
Honestly, if you are looking for something to sink your teeth into while you wait for the next Expeditionary Force novel or you just fancy reading something that doesn't orbit alien sex, drugs and more sex then this is a great choice. Plus, the cover art is pretty damn awesome.

This was a well written, entertaining, and fun book. George Newbern is great as a narrator. I loved Justice League and Superman back in the day, and at first I couldn't place his voice. I thought he may be that guy from Wings. Then it hit me, "That's Superman!"

His voice is great for capturing the "every man". Loved it.

Can't wait for the next book!

A bit of Matrix meets space opera. I have already purchased the second in the series. The galaxy is a big place, but not big enough. I enjoyed the story. It’s not 5 stars but a solid addition to the genre. I am starting the next book right now. Good job all around.

I've just finished listening to the latest book in the series, Heretic. I can honestly say it's one of my favorite series in recent years. Great characters, both serious and funny, as well as those who are serious but can sucker punch you with humor when you least expect it. There were enough big questions to keep you listening to find out what mysteries await you, but not so many that it became a confusing mess.

George Newbern's narration is top notch and should be held as an example of what good narration needs. Too many narrators read to you like they are trying to read a math text book, dry and emotionless. They can make the voices distinct, sure, but without the emotion behind the words, it just falls flat. I just passed on 5 series while looking for my next book for that exact reason after listening to the sample. I like books of Intrinsic's length or longer and I won't sit through dry, painful narration for that long, no matter the story. Newbern has none of these issues. He reads to you like he's actually experienced the events, speeding up slightly when things get exciting, or calmly when it's appropriate. He reads like he's feeling the emotions in the scene and in turn, we feel it to. My heart races when the action is hot, or breaks when sad things happen. More than once throughout the series I was yelling at the speakers "No!, DON'T YOU DARE!!" as if the act could change what was coming, so invested did I feel because of how it was done. Even little things like the small breaths you hear are natural and what a real person would do if they were there, and you find yourself copying it. The story is amazing and well done, but the MVP of this series is Newbern. 10/10 will read his other work.

Why the high ratings?

There was a good story here but it was buried under tons of excess verbiage and regurgitated trope. The dialog and dynamics of the story were driven by the petulance of the characters who themselves were only slightly reimagined recreations of the main Star Wars characters.
Humankind seemed to have developed disturbingly little in the hundreds of thousands of years that the protagonist version of our species apparently were in existence.
I suppose that this was a good story for 10 to 15 year old kids, but I am way out of that demographic

Differences between the ebook and audiobook are annoying.

Over all, this is a fun read. I like to listen while I am reading, and there are passages from the audiobook that read differently in the ebook. Aside from that, the reading is done quite well.

It was very difficult to differentiate between scenes with no pauses to indicate a change in perspective.

I really enjoy the author's first 2 books of the Echos of Fate series, giving each of them solid 5 stars across the board; however, I found a lot I disliked in this book. While the story idea itself held promise, the two primary protagonists weren't written in a way to make them all that compelling. There really wasn't much backstory to them and there portrayal came off rather blandly. The primary protagonist too often lapsed into repeated introspection. There was a rogue protagonist near halfway through the story who came off somewhat interesting but even there his participation was somewhat sketchy and too stereotypical.

Then there were the frustrating transitioning between story arcs that left the listener somewhat bewildered until half a paragraph into it. There was also too much time spent on providing extreme detail on all the different environs that were visited which slowed the pace of the story.

Lastly, the narrator came as nonchalant, further making it difficult to want to keep listening.

I'll not be continuing with this series.

I've read this story before in so many versions, this version doesn't even bother being original in any unique way - humans were engineered by older human civilization, Ursula la guinn did it better. Hero is the chosen one, I mean avatar or whatever. No surprises or twists. when only female character is introduced you are immediately told she's the love interest in subtext. All characters are flater than my phone.

loved it. This is what I like about sifi. Thinking out side the box. New insights to the worlds of the future.