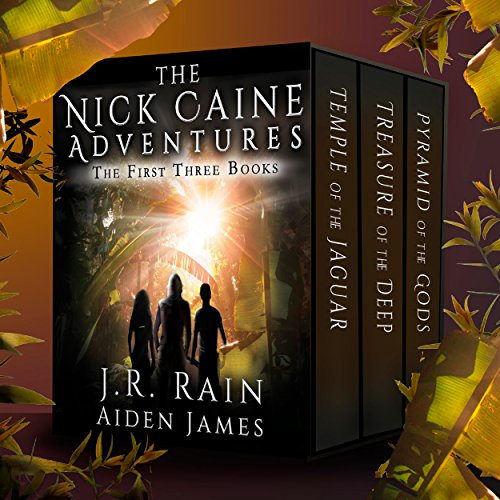 Temple of the Jaguar: Nick Caine is a part-time archaeologist and full-time antiquities thief-looter. And a very good one, too. So good that he catches the attention of the beautiful Marie Da Vinci, who offers him the chance of a lifetime: to locate the legendary Ciudad Blanca. The lost White City. A city purportedly filled with riches beyond belief. Against his better judgment, Nick agrees to help... and soon finds himself on a trail into the unknown. And close behind is someone who will stop at nothing to beat them to the prize. Nick Caine, of course, has a few surprises up his sleeve. After all, he's no ordinarily looter.

Treasure of the Deep: Now stranded on a small, forgotten island in the southern Maldives, Nick Caine and his ever-faithful sidekick, Ishi, are thrown into a desperate fight for survival. Seemingly betrayed by Marie Da Vinci, Nick is forced to gamble his and Ishi's very existence on an ancient map.

The parchment document promises an incredible horde of hidden pirate treasure. The very words are music to a looter's ears - except the duo aren't the only ones interested in the hidden treasure. Modern-day pirates are on the scene, and it's going to take all of Nick Caine's unflappable charisma to bail them out this time.

The stakes quickly escalate, leaving Nick and Ishi very little time to narrow down the map's clues. Soon, their fate and that of an exotic Maldivian beauty named Norema hang in a precarious balance...proving once again that looting is a deadly business.

Pyramid of the Gods: Deep in an Egyptian desert known as The Great Sand Sea lies an ancient treasure trove of Hittite gold...Legends say the gold belongs to the famed goddess, Sekhmet. But a map belonging to Nick Caine says otherwise - at least to Nick.

The narrator should have allowed the characters to evolve instead he imposed his interpretation on the reader. The main character is someone who is confident with a hidden vulnerability, instead because of the way this is read, he is an annoying jerk. The inflection of the reader causes one to wonder if he read the story before performing. More than two pitches of tone are requried to engage a reader, and if you cant do a female voice, dont try!!!

What was most disappointing about J.R. Rain and Aiden James ’s story?

No character development during the story, they end as they began. This is based in the lush rain forest/jungle of Honduras - really???? where is the description that makes us feel hot, or allows us to visualise the humid but vibrant green which surley must be present? A real shame as the premise for the story was good.

The actor could have read the story before narrating!

What character would you cut from The Nick Caine Adventures: First Three Books?

All should stay but they are in desparate need of development. It seems the minimum of words has been used wherever possible

Thank goodness they are short stories, I cant bring myself to leave a book unfinished, but this tested me.