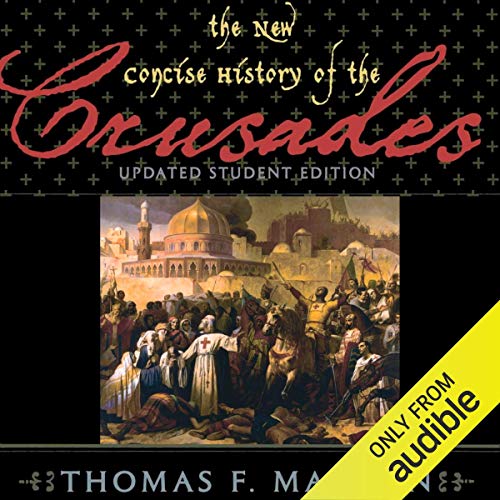 The New Concise History of the Crusades

How have the crusades contributed to Islamist rage and terrorism today? Were the crusades the Christian equivalent of modern jihad? In this sweeping yet crisp history, Thomas F. Madden offers a brilliant and compelling narrative of the crusades and their contemporary relevance. Placing all the major crusades within their medieval social, economic, religious, and intellectual environments, Madden explores the uniquely medieval world that led untold thousands to leave their homes, family, and friends to march in Christ's name to distant lands. From Palestine and Europe's farthest reaches, each crusade is recounted in clear, concise narrative. The author gives special attention as well to the crusades' effects on the Islamic world and the Christian Byzantine East.

“In crystal-clear and economical prose, Madden does a superb job of exposition. As an introduction to the vast literature of the crusades, this is a jewel of a book.” ( Washington Post Book World)
“Readers will owe Thomas Madden warm thanks for so clear an introductory account of so complex a phenomenon as a crusade.” ( The Historian)

What listeners say about The New Concise History of the Crusades

So much political intrigue that I was unware of. Narration ok but a little bland.

Overview of the Crusades and their Place In Histor

Where does The New Concise History of the Crusades rank among all the audiobooks you’ve listened to so far?

This book is a great overview of the Crusades and their historical significance. By its own admission it is not extremely in depth which I think is helpful, it gives you an overview of the story. Some specific instances of battles and their consequences. It doesn't get bogged down in any minutia that some historians feel the need to do.

I was very glad the book went into the the role the Mongols played in the Crusades whom I have studied quite a bit.

The narrator did an excellent job and really kept the flow of the book going well. If you are like me and listen on the iOS Audible app at 2x or 3x speeds, Claton Butcher's voice easily handles the speed increase without sounding clipped.

This an objective study of the Crusades without a political agenda that is so often present in educational material available today.

this book is written to simply give the history of the crusades and not to lend some agenda or modern revision.

I found this very informative. It really gave an excellent historical account of the Crusades without some of the bias that so often accompanies such an account. Very well written, and great audio presentation!

What does Claton Butcher bring to the story that you wouldn’t experience if you just read the book?

I always enjoy Claton's narration. I find him very easy to listen to.

Informative without being a snooze

This book provides an excellent look at the crusades, putting them in perspective for their time and in relation to current world politics. It is a great overview for the uninitiated and a great review for folks who have studied the crusades.

The book opens by providing a setting just prior to the first crusade, placing us in the mindset of Medieval Europeans. From there, the information is laid out chronologically. The book closes with the authors analysis of how the crusades were held up as examples of chivalry, later to be reviled as early colonialism, and finally how they relate to modern politics. The pacing is good, not getting bogged down in minutiae or in lists of dry ancient reference texts. Occasionally, there were more names being used than I could keep easy track of, simply because I was unfamiliar with the subject matter.

I learned quite a bit from this book and that makes me happy. Before listening to this book, what little I know came from popular movies and books, and, of course, I couldn’t rely on those to be accurate. I really liked how the book was laid out chronologically and I deeply appreciated the author’s constant efforts to have the reader think like a Medieval European.

In addition to this, the author often gave examples of Muslim impressions of the crusades. This in particular was fascinating. For Europeans, and even Americans, the crusades were a big deal, and continue to influence our culture, if mostly through popular media. At the time of the crusades, the Muslim world barely took note of them, seeing them as just yet one more barbarian force to be repelled (and the crusades were often repelled). The crusades had a greater impact on the Byzantine Empire, mostly because places were sacked and sometimes burned.

It was fascinating to see how the crusades evolved over time. Initially, the word ‘crusade’ was not associated with the pilgrims who ventured east for religious enrichment. Old, young, sick, healthy, men, & women traveled on pilgrimage. It was only later that such pilgrimages became armed men crusading to the east, with the blessing of pope and lord, to defend Christian lands.

In short, this book was an excellent read and definitely worth shelf space as a reference work. It is chock full of info on the European leaders, the Byzantine reactions, the few bits directly affection Muslim affairs, and how the crusades were affected by the Mongols. The book does an excellent job of placing the reader in a Europe steeped in a religious culture and how that affected, even directed, the actions of European leaders. It’s even worth a reread.

Narration: Claton Butcher gave a good performance. He had a clear voice that used a little emotion as needed, so it was not textbook dry. He also went to the effort of pronouncing people and place names with the correct accents. Such touches are so appreciated by this listener!

A great place to begin your study of the crusades. Very accurate and still readable by the new student. The book is relatively short for books on the crusader. It is a good reference book. Very interesting. The narrator was good narrating this audiobook.

An unbiased history. It was easy to see the truth, the politics, greed, and desire for power behind it all. No fluff, no glory, just man being as full of his desires and ego as always.
I enjoyed this work very much. Its a broad summary which plays out through a large length of time in one condensed book.
The narration was very clear and pleasant. In my opinion narrating a book of this type is not easy but the narrator did a superb job.
*This is my unbiased review via a promotional copy.

Sadly no. Thomas Madden is a respected historian and this is an important book. I have enjoyed many of his lectures given, of course, in his own voice. This book is all but ruined by the narrator. I'm at a loss to understand how anyone let him have the job! His cadence is slow and plodding, and he does not seem to understand what he's reading enough to give it proper inflection.This book should read like the exciting adventure story that it is. Instead I find my mind wondering off pretty frequently while trying to listen. Particularly grating is his pronunciation of any and all foreign (non-English) names. He butchers the French names in particular and his attempts at German are so bad - they sound like something out of a Porky Pig cartoon. Not kidding.Each time he stumbled over a name it was a distraction from the narrative. I have a degree in History and love listening to history books, but I am having a hard time getting through this one. Professor Madden ought to demand a do-over.

Would you be willing to try another one of Claton Butcher’s performances?

History everyone should know !!

very good read,unbearable conditions these guys lived and traveled in. The same conflict has been occurring in that part of the world for 2,000 years!!

Deals with the Crusades on their own terms fairly

What did you love best about The New Concise History of the Crusades?

The way he could make a coherent story of all the multifaceted and widespread events of this interesting time in Christendom. And that he did it with no bias to a political agenda or party is nice.

Thomas Madden is very knowledgeable on the Crusades, i recommend his other History lesson on the modern scholar series.