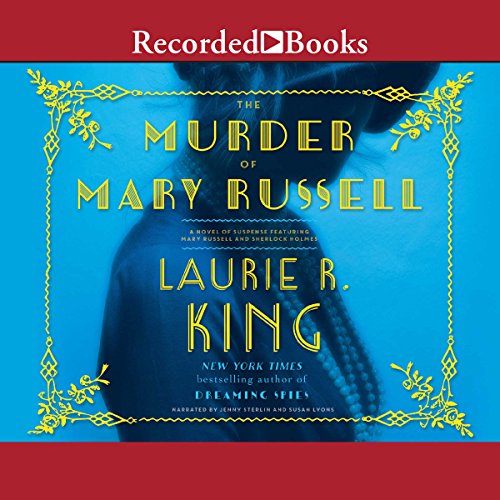 The Murder of Mary Russell

Russell and Holmes have become one of modern literature's most beloved teams. But does this adventure end it all?

Mary Russell is used to dark secrets - her own and those of her famous partner and husband, Sherlock Holmes. Trust is a thing slowly given, but over the course of a decade together, the two have forged an indissoluble bond. And what of the other person to whom Mary Russell has opened her heart: the couple's longtime housekeeper, Mrs. Hudson?

Russell's faith and affection are suddenly shattered when a man arrives on the doorstep claiming to be Mrs. Hudson's son. What Samuel Hudson tells Russell cannot possibly be true, yet she believes him - as surely as she believes the threat of the gun in his hand. In a devastating instant, everything changes. And when the scene is discovered - a pool of blood on the floor, the smell of gunpowder in the air - the most shocking revelation of all is that the grim clues point directly to Clara Hudson. Or rather to Clarissa, the woman she was before Baker Street.

The key to Russell's sacrifice lies in Mrs. Hudson's past. To uncover the truth, a frantic Sherlock Holmes must put aside his anguish and push deep into his housekeeper's secrets - to a time before her disguise was assumed, before her crimes were buried away. There is death here, and murder, and trust betrayed. And nothing will ever be the same.

What listeners say about The Murder of Mary Russell

Somewhat lacking in Sherlock and Mary.

Just a little warning to those who have been enjoying this series, that the majority of this book takes place away from our favourite couple. Jenny Sterlin is great as ever and the story is interesting without being as engrossing as some of the others.

What could Laurie R. King have done to make this a more enjoyable book for you?

Stuck to the Mrs. Hudson character as she has always been. This total change in her personality just doesn't ring true.

What does Jenny Sterlin and Susan Lyons bring to the story that you wouldn’t experience if you had only read the book?

To me Jenny Sterling is Mary Russell, her voice is perfect.

The parts focusing on Russell and Holmes were as good as always.

I don't know if I shall bother with any future books, I'll wait and see, but this is one I shall not be listening to again.

Another excellent story, well written and read. Can't get enough of Laurie R King. Long may she continue to write these great stiries

Not what I was expecting, but it was still very good. There's an awful lot of back in the day stuff and it's all pretty interesting. It's a difficult book to review without being spoilerific to be honest, but if you've liked the rest you'll love this one

I've been a fan of this series since the first book and I've read many of Ms. King's other works. She's a gifted writer. But this book is just awful. Is she just writing a certain number of words to satisfy a book contract? Because if she can't come up with any more interesting ideas than this, she should just stop.

The entire first half of the book is incredibly boring. The history of Mrs. Hudson and her family seems to go on and on and on. The good and the bad of an audiobook is that you can't skim, the narrator is going to read every word. So we get seven hours (!) of her parents meeting, traveling to Australia, her poor childhood, learning to run cons with her father, traveling back to England, etc., etc. It seems like the kind of detailed character backstory that a writer might create for a long running series like this. But it doesn't need to be shared with your readers. There are a few brief alternating chapters with Mary and almost no Sherlock. (It is no spoiler to tell you that, title be damned, Mary is not murdered.) While key issues in Mrs. Hudson's story are essential to the narrative, I honestly think it could have been condensed to a prologue, or at least greatly reduced in some other fashion. Then I might not feel so cheated.

The action picks up considerably in the second half of the book, and for a time it's not a bad Russell/Holmes adventure. The added relationship between Mrs. Hudson and Billy was a nice surprise. But I felt the revisionist explanation of the Holmes/Hudson relationship was improbable - well, unbelievable actually - and the ending left me confused and sad. I refuse to accept where the author has gone with her characters. So I'm going to pretend this book never happened.

Jenny Sterlin continues her top-notch narration, and I found the voice of alternate narrator, Susan Lyons, to be quite compatible with the style of the series. I have no complaints there.

I am absolutely astounded by the number of 5 star ratings for this book. I am only giving it one star because I have to give it something. (I gave Pirate King and Garment of Shadows more than that!) And I am asking for my credit back.

Loved it! The author is at the top of her game in this story, in which we learn much more of Mrs. Hudson's background and how she met Holmes.

And the action jumps back and forth between Mrs. Hudson's story and the nerve-wracking effort to find out what happened to Mary Russell. So... cliffhanger after cliffhanger within the book, although everything is solved by the end.

Extremely gripping, if you're a fan of the series. Probably entertaining to any Holmes fan who is willing to allow the author to re-arrange the Conan Doyle universe.

I highly recommend this book.

The Murder of Mary Russell

Highly creative, exceptionally entertaining, and downright brilliant! Laurie R. King’s “Mary Russell” series is one of my top five favorite literary series of all time, and #14, “The Murder of Mary Russell,” is the best volume thus far! King exhibits an uncanny ability to take the deep and subtle insights she's gained into the psyches of the characters she creates, and then weaves credible, yet extraordinary circumstances and motivations into her story that couldn't possibly be anticipated, but which always fit tight. In addition, King never fails to draw out intense emotional responses from me, which I find most gratifying! Usually, once a novel is finished, I pick up another without pause, but “The Murder of Mary Russell" has left me wanting instead to just sit for awhile and marinate in the profound satisfaction I'm feeling from my reading experience. Thank you so much, Laurie R. King! You are an extraordinarily talented artist and visionary! I look forward with great anticipation to your future offerings.

I love LR King's Mary Russell books, but just like Pirate King, this is another one that just doesn't fit. The early years of Mrs Hudson drag on forever but vaguely. Poor setting descriptions, dialogue unhelpful. Lots of "filler". The London years pre Sherlock are so unbelievable that it was a struggle for me to finish. Hope the next book will get back in track.

I was very excited to have a back story for Mrs. Hudson, but this was not the correct one for me. The ending made Holmes seems as if he never know her. Seemed to me to make both Holmes and Russell look like fools.

A New Twist for Holmes & Co.

I don't think it's a spoiler to reveal what any fan of this series will know even before picking up this latest installment in the Holmes/Russell series: the title is a tad misleading!

That said, it was quite smart of Laurie R. King (a woman whose intelligence obviously equals that of her creations!) to take the story in a new direction. Her latest additions have involved separation of the characters, foreign lands and plots, and (let's be honest) a certain flatness in the Holmes/Russell progression. This departure makes for a good way to return to the earlier freshness of the series and to the British basis of the Doyle canon.

The twists, turns, and revelations in "The Murder of Mary Russell" make the book a real treat for Sherlock Holmes fans. Although the reader may initially think Mrs. Hudson an unusual choice for front-and-center treatment, in the hands of King, nothing could be further from the truth!

a totally unexpected chapter of the Mary Russell and Sherlock Holmes saga. The back story of Mrs. Hudson reveals another aspect of life in London in the late 1800s, with satisfying bits of Mary herself and Sherlock. this knowledge changes everything that has come before.

Now we have the real thing.

Ahh! Replete and satisfying in all respects. Brava Ms King, and pleasant read to your fans.