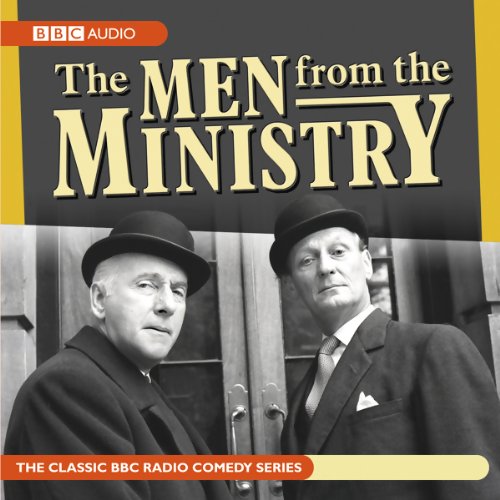 The Men from the Ministry

Here are four episodes of classic comedy from the days when the Civil Service had a sense of humour. The Men from the Ministry were the hilarious radio forerunners of TV's Yes Minister — bungling bureaucrats who bungled for 15 glorious years from 1962 to 1977.

Muddling through were Wilfrid Hyde White, as the first head of the ubiquitous General Assistance Department, and the imperturbable Deryck Guyler, who followed him in 1966. Richard Murdoch was their faithfully incompetent Number Two. Together they created absolute chaos — and an enduring and influential Whitehall spoof. Here, with the help of guests like Warren Mitchell and Roy Dotrice, they mismanage a new road scheme, upset Britain's space programme, confuse the export drive, and attempt to rescue a forgotten army unit.

Their potty exploits remain (in the inimitable words of the BBC announcer) "a tribute to the men of our Government service, those men who are sometimes compared to tea bags: they always stick together when they get into hot water".

What listeners say about The Men from the Ministry

The first episode in this audio book, relating to the 1960's space race, is a master class in comedy writing and performing. These recordings have stood the test of time and are superior to most of today's comic offerings on the radio. If you enjoy British vintage comedy radio programmes then this audio book is a must for you.

the men from the ministry

The men from the ministry is set in 1960s England . having worked for the civil service since the 70s I can say with some justification the different departments guarded their own departments to the detriment of others. Chaos would , could and did ensue. So lie back think of England and listen to the worst department in civil Service history do their level best to make you smile as the Chaos ensues.

Discovered on radio 4 extra and have been ever since. Very witty and clever storylines revolving around the incompetence in a department in Whitehall. Love it.