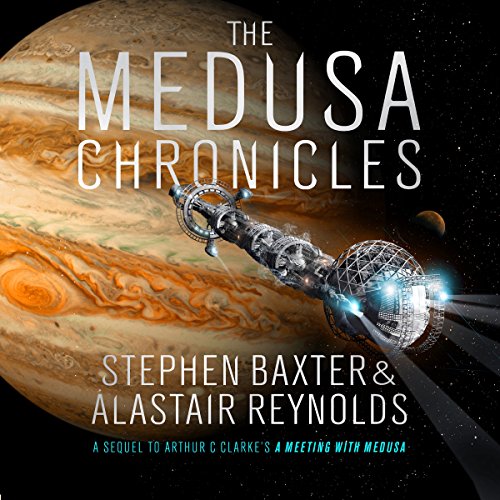 By: Stephen Baxter,Alastair Reynolds
Narrated by: Peter Kenny
Try for £0.00

Following an accident that almost cost him his life, Howard Falcon was not so much saved as he was converted, through the use of prosthetics, into something faster, stronger and smarter...but also slightly less human and more machine than he was. And with this change came an opportunity - that of piloting a mission into Jupiter's atmosphere and ultimately of making first contact with the life forms he discovers there.

Picking up the threads of humanity versus artificial intelligence and machines, and of encounters with the alien, this collaborative novel between two superb writers is a sequel to Howard Falcon's adventures.

A proper science fiction adventure, this is perfect for fans of Golden Age SF as well as the modern SF listener.

What listeners say about The Medusa Chronicles

I can't find anything good to say about this. I'm a great Reynolds fan and have read or listened to all of his other work, so I listened to this in a state of disbelief. To continue Clarke's story with a 50 year old view of what technology might be like on the future is puzzling, as it fails to take into account the technology that we take for granted now. OK, this may be an alternative reality, but it is an extraordinarily tedious one.
I know that Peter Kenny is not everyone's cup of tea, but I am quite a fan of his - normally. But on this occasion his breathless delivery is reminiscent of Nicholas Parsons much parodied introduction to Just A Minute. (Apologies to non-British readers who won't have any idea of who Nicholas Parsons is.)
I am very disappointed with this book, it fails on every level: 2 dimensional characters, sleep inducing pace, poor delivery and a tired plot development that makes it impossible to suspend disbelief.
The only reason I gave this 2 stars rather than 1 is because of my respect for Clarke, Reynolds and Kenny.

This was no chasm City

I felt the characters were very two-dimensional not a typical Alastair Reynolds book I don't know about Stephen Baxter as I've never read any of his books before.

The plot was very predictable, it only really got good in the last few chapters. The best thing about this audiobook was Peter Kenny who did superb performance as usual.

not a bad story, enjoyed it enough but felt it could have had a little more depth

Very good after a week start

Not a fan of Stephen Baxter but am a fan of Alastair Reynolds particularly his machine dystopian work. So was worried with a very lack lustre, no detail, almost comic book start. However, things really tightened up to make it a good read. Peter Kenny to a very able job of narrator, but I personally would of preferred a bit more range and gravitas

Held my interest to the end, good twists and turns. Well worth listening to with believable characters. A bit rushed around some areas and characters.

Fascinating read with plenty of fresh sci topics to grab my interest. Look forward to more from these authors.

I really enjoyed the nearly familiar characters and the long life scenarios. so thoughtfully written with a well paced and not overly complicated plot. a great book to pick up and put down. I dipped in and out over a couple of weeks and my enjoyment didn't suffer.

Great story worthy of two great authors. Engaging to the end.
Great performance as well with perfect accents throughout.

Oh dear, during chaper 9 I gave up for the last time; the story didn't grip or appeal and i lost the will to keep on listening.

Great in all respects from a well concieved and exciting plot, with interesting lead characters and fantastic narration.