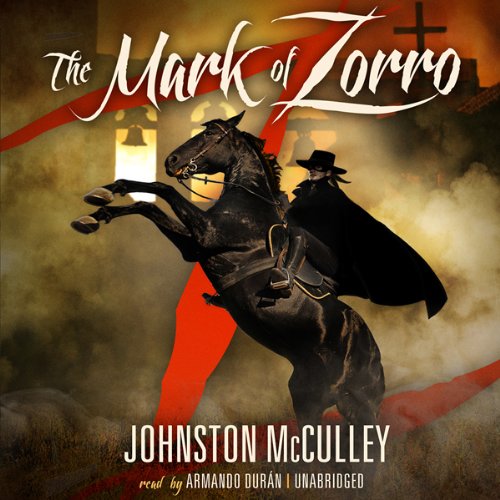 The Mark of Zorro

Originally serialized, this exciting adventure story achieved immortal fame thanks to the Douglas Fairbanks film of the same name - a cinematic triumph that inspired author Johnston McCulley to dedicate the book release to Fairbanks. It has since seen numerous film and other adaptations, including Blackstone Audio’s full-cast audio drama produced by the renowned Yuri Rasovsky and featuring the voice talents of Val Kilmer.

1820s California, in a bygone era of sprawling haciendas and haughty caballeros, suffers beneath the whip of oppression. Missions are pillaged, native peasants are abused, and innocent men and women are persecuted by the corrupt governor and his army. But a champion of freedom rides the highways. His identity hidden behind a mask, the laughing outlaw Zorro defies the tyrant’s might. A deadly marksman and a demon swordsman, his flashing blade strikes down those who exploit the poor and oppressed.

First published in 1919, The Mark of Zorro remains a paradigm of swashbuckling adventure and a popular novel to this day.

Johnston McCulley (1883–1958), a one-time police reporter, was the author of hundreds of stories, fifty novels, plus numerous screenplays for film and television. He was also the creator of the character Zorro.

“A succession of thrills from first page to last…Original…Captivating.”—Boston Traveler

What listeners say about The Mark of Zorro

I have enjoyed several previous versions of the Zorro story, but this has to be one of--if not the best. This is, I think, the original version, and has not been surpassed. Also, the reader was perfect. In this story there is excitement, romance, villainy, heroism, irony, farce, humor, drama; and it made me laugh out loud. I don't think it gets better than that.

This is a fun read! So much better than some of the more recent Zorro movies.
The story is very fun and depicts a very honorable, loyal, faithful, and brave Zorro. The author does not try too hard to keep the reader from discovering the true identity of Zorro. He is the weakest, most pathetic man in the town. It is fun to see his dual personalities coming through when he plays the weak nobleman who does not know how to connect with a beautiful women versus the brave, daring, dashing Zorro who sweeps the beautiful maiden off her feet.
The narrator does an excellent job telling this story! Enjoy!

I loved this more than the movies! It was actually an advantage to already know who the "real" man behind Zorro is when reading this story, for it allowed me to delight in every trick the man played right from the beginning. This was a true romantic, swashbuckling type adventure ride and a new favorite in my library!

Also, the part of me that likes history loved hearing some of the original names of cities in the territory, and looking up some of the local history tied to the story. Except when doing that, I was itching to get back to the story every time I had to stop listening for awhile.

Note on the performance: I chose a different version first based on the audio samples, but, though that narrator had great expression and voice, his pronunciation of Spanish names and his Spanish accent grated on me so much that I gave up and bought this one. I'm SO GLAD I did! In additiion to well-pronounced Spanish names and believable Spanish accents for the characters that use them, this narrator gave a much more entertaining performance than I expected and made good choices for each of the characters' voices. He does an admirable job here all around, and I have ZERO complaints!

The story is fantastic, but the reading is somewhat lacking, in my opinion. Overall it's OK, but it's the voice of Don Diego that's lacking. The character is supposed to be lazy and disinterred, not whiny and weak. There's a difference. Unfortunately the reading of the character comes across as the latter, and it's the wrong sentiment for him. Other than that it was fine, but it's significant enough that I would recommend looking for another narrator if available.