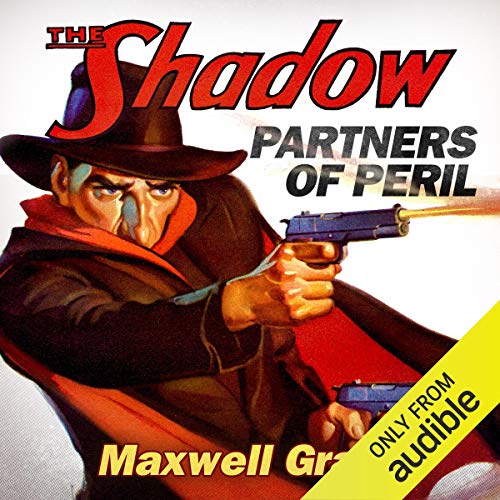 Partners of Peril (The Shadow)

In this full-cast production of the classic pulp novel, The Shadow investigates as, one by one, the partners in a chemical company die mysterious deaths.

The plot of Partners of Peril and much of the action is almost identical to "The Case of the Chemical Syndicate", the very first Batman story in Detective Comics #27, which appeared some years later. In fact the creators of Batman acknowledged they drew their inspiration for the Caped Crusader from this classic Shadow story.

What listeners say about Partners of Peril (The Shadow)

This plays like a cross between a traditional audiobook and an old time radio show. Not quite either, this is the best multicast performance I've ever seen from Audible Studios. Enriched with sound effects, music, and few little tricks that harken back to the days of the Shadow radio show, this one is a tremendous amount of fun. Now, you have to understand what you are getting here. This is an original pulp novel from the 30's so the prose is a bit over the top, but fun? Oh boy, is this fun. Unleash your inner 10 year old for a few hours and enjoy this. I certainly hope Audible studios does more of these performances/readings with a full cast. There are more than 300 novels featuring the Shadow to choose from and the Doc Savage stories would lend themselves to this kind of treatment as well. C'mon Audible! You are on to something here! Keep them coming!

I was so surprised to see this up on audible. I never understood why there were no audiobooks of The Shadow Pulp novels. Hopefully this is just the beginning. Bring on the remaining 324 books!

Great audiobook, audible needs to add more of the adventures of the Shadow. I recommend this audiobook to all mystery and suspense

Entertaining from start to finish

Classic Shadow Pulp novel. Good atmosphere and mystery. It's what to expect from Grant. Always a pleasure to get back into the novels that made The Shadow the lore built up.

The audio version is nice to have different voices as it feels more like the old time radio show. But how can you not have the guy who voices The Shadow not do a haunting laugh?!?!?!
Final Grade - A-

a fun listen. can see where Kaluta got his inspiration to do a batman-shadow story in the 70s.

Ever since I was a kid I loved The Shadow and now to be able to listen to these books, it rekindles that fascination with this character and his stories.

the narrator did a fantastic job of telling the story, it was kind of like listening to a ghost story by a fire.

this book would definitely not be the same without its dramatization, the cast was fantastic as well as the sond effects.

overall I loved the book and I hope and pray that they do all of Maxwell grants works in this fashion! Thank you!

The Shadow knows...and so will you!

A talented cast of performers does a great job of bringing The Shadow, his agents, and a splendid group of villains to classic pulp life. Bravo!

I hope Audible records more of The Shadow's pulp adventures, specially with a cast of voice actors. I've enjoyed all of these Audible productions. If you only know the Shadow from the radio show, you're in for a nice surprise, his pulp adventures are way better!