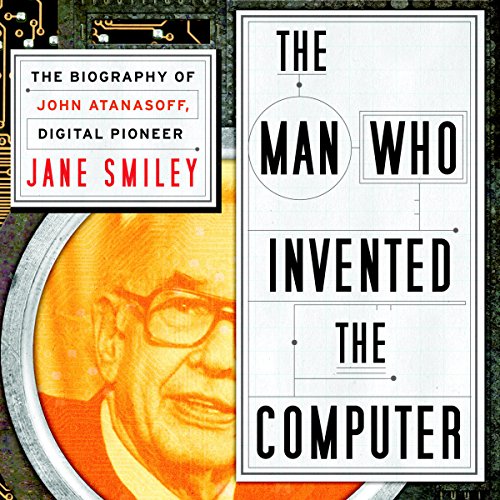 The Man Who Invented the Computer

By: Jane Smiley
Narrated by: Kathe Mazur
Try for £0.00

From one of our most acclaimed novelists, a David-and-Goliath biography for the digital age.

One night in the late 1930s, in a bar on the Illinois-Iowa border, John Vincent Atanasoff, a professor of physics at Iowa State University, after a frustrating day performing tedious mathematical calculations in his lab, hit on the idea that the binary number system and electronic switches, combined with an array of capacitors on a moving drum to serve as memory, could yield a computing machine that would make his life and the lives of other similarly burdened scientists easier. Then he went back and built the machine. It worked. The whole world changed.

Why don’t we know the name of John Atanasoff as well as we know those of Alan Turing and John von Neumann? Because he never patented the device, and because the developers of the far-better-known ENIAC almost certainly stole critical ideas from him. But in 1973 a court declared that the patent on that Sperry Rand device was invalid, opening the intellectual property gates to the computer revolution.

Jane Smiley tells the quintessentially American story of the child of immigrants John Atanasoff with technical clarity and narrative drive, making the race to develop digital computing as gripping as a real-life techno-thriller.

What listeners say about The Man Who Invented the Computer

Not a book for anyone uninterested in the more technical issues related to computers. However there is also plenty of biographical interest here, particularly as the personalities involved were so vivid, quirky, and driven. I enjoyed it a lot though I needed to concentrate at times.

Half Atanasoff biography, half biograph of others

Overall, I enjoyed the book but the focus was more on the era and the cast of characters involved and less about Atanasoff than I had expected. Still very interesting and, I think, worth while.

What was most disappointing about Jane Smiley???s story?

I was hoping for more information about the actual process of invention undertaken by Atanasoff and Berry and perhaps some technical detail. The book was completely non-technical. A LOT of time was spent on biographies of the other people involved in the birth of the computer, which was interesting, just not what I expected in this book.

What else would you have wanted to know about Jane Smiley???s life?

I didn't and don't want to know anything about Jane Smiley's life. It wasn't her biography. I would have enjoyed a bit more about Atanasoff''s professional life during the time he spent at Iowa State College (now University). The period in which he was actually creating his invention is, perhaps, the least well covered period of his life.

Not what I learned in school

I'm so glad I found this book to read. Throughout my studies on computers during the late 1960s and early 1970s I never encountered the name John Atanasoff. All credit was given to many of the other illuminaries identified in this book. The story of John Atanasoff is full of drama, intrigue and deception.

Thank you for Computer History books