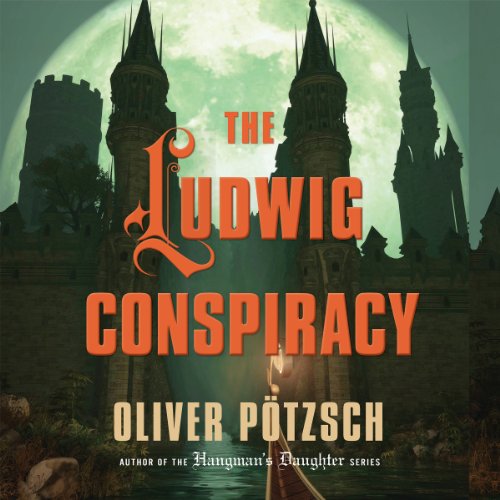 By: Oliver Pötzsch
Narrated by: Simon Vance
Try for £0.00

In 1886, King Ludwig II, the King of Bavaria, was deposed on grounds of mental incapacity without any medical examination. His "diagnosis" remains controversial among historians to this day. Soon after his fall from power, Ludwig died under mysterious circumstances, leaving the eccentric and beautiful "fairytale" castles he had built as his only remaining legacy.

While putting away books from an estate sale purchase, rare book-dealer Steven Lukas finds a box he's never seen before wedged between books on a high shelf. In it he discovers what looks to be a small diary written entirely in code, a lock of hair, and old photographs of the Fairytale King. It isn't long however, before his excitement turns to fear as he realizes that mysterious others want the diary too - and will apparently kill to get it. Suspecting that his find may contain the secret truth behind Ludwig's death, Steven consults with art historian Sara Lengfeld. Soon they find themselves on the run together, investigating each of Ludwig's three castles for clues as to just what in that ancient diary could be so explosive as to be worth killing - and even dying - for.

"Pötzsch’s sophisticated plotting and good use of a real-lifehistorical puzzle place this far ahead of most Da Vinci Code wannabes." ( Publishers Weekly starred review)

What listeners say about The Ludwig Conspiracy

Who doesn’t love a good conspiracy theory and the death of King Ludwig has kept historians busy for years. The story format isn’t original but it’s told exuberantly and with pace. On a side note it’s great to find German literature in translation that isn’t about Nazis!

Another fine piece of literature steeped in historical facts as well as fictional writing that keeps you thinking and on the edge of your seat throughout. Very enjoyable listen.

If you love old books, old fairy tales, and old Germany, this one's for you . . . Having lived in Germany twice and visited all three of King Ludwig's castles, I was captivated by this historical (fictional) tale moving between current day and the last days of the king's reign. If you don't have a vivid imagination or value things of old, it may not be for you . . . but I found myself lost in it . . . once again walking in Linderhof, Neuschuanstein, and Herrenchemchiemsee castles. The modern day murder and the box containing the diary that leads Steve and Sara back to the castles in search of answers is a mystery that keeps you listening . . . and wondering . . . a great journey!

A big fan of Oliver Potzsch's Hangman's Daughter stories, I hoped for another well written piece of historical fiction and was not disappointed. With no previous knowledge of the Fairytale King lLudwig II, I really enjoyed learning about the times and being entertained with the possibilities. Well worth the read. Oliver Potzsch's historical fiction is great as it embraces topics and times not well covered by others. As a fan of his and the late Swede Henning Mankel, I often wonder how many non English writers are out "there" awaiting discovery.

It's been a long time since I really loved a book like this where the writing and performance come together in a perfect storm of talent. I am a Scott Brick and sometime Luke Daniels fan but Simon Vance has gone to the head of the class with this book. I highly recommend this story to anyone who has any imagination at all.

Could not put down

It's been a long time since I've had a book that kept me in suspense like this. I could not put this away and when I did all I could think about was picking it up again. FANTASTIC BOOK, The narrator really brought it to life. loved it!!!

I love the Hangman series and was excited to see this book on Ludwig. I knew very little about King Ludwig other than he was crazy and built beautiful castles. I found the story disappointing. I never developed a relationship (other than annoyance) with any of the characters, past or present. They seemed very flat. In addition, I figured out clues much faster than the characters, which made the book drag. It was also difficult to believe an "art detective" would have such disregard for a valuable, antique diary, as to turn its pages with chocolate on her fingers. The bookseller was spineless beyond belief. If you are a huge fan of Ludwig conspiracies, read the book. If not, save your time and credit for the Hangman series.

Would you try another book from Oliver Pötzsch and/or Simon Vance?

I am hesitant about other books by Potzsch. I was so excited by the book description, but felt let down. The story was just meh.

As for Simon Vance, his narration was great. I would definitely listen to another book narrated by him, so long as the book sounded interesting.

I think it would take a lot of changes to make this one more enjoyable, but the biggest thing would be to strengthen the plot.

Which character – as performed by Simon Vance – was your favorite?

I think he did them all well.

Was The Ludwig Conspiracy worth the listening time?

It depends on the listener. For me, the story was a let down.

Ludwig II is a fascinating character but this is a dime store potboiler not worthy of the legend. Simon Vance is great as always.

Especially Interesting If You Visted the Castles

I knew very little of the history of King Ludwig II. Though this is a work of fiction the life of this king and the times he kived in is alive. I was a teen and in my early 20s when I visited these places and could not place them in a historical context.
The story woven around the conspiracy of how he died is thrilling. I couldn't stop listening. The Audio Book made this book even more exciting. perfectly matched with the person who read it.

A good storyline if a little predictable at times. I enjoyed the historical aspects. Just felt at times it was more like a James Bond film script than a novel.but a good listen