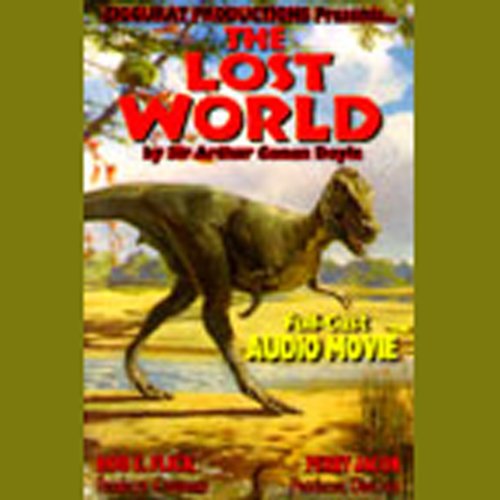 This full-cast audio movie invites you to travel with Professor Challenger to a secluded South American plateau...deep in the Amazon jungle...where no civilized man dares to go...and where dinosaurs still roam! This is the original terrifying adventure tale, as spawned by the mind of Sir Arthur Conan Doyle - the man who gave the world Sherlock Holmes.
Production and Music ©1996 by Bob E. Flick
Science Fiction & Fantasy Fantasy Science Fiction
Show More Show Less

What listeners say about The Lost World

Much shorter than I thought it would be, but enjoyable and the characters were voiced well.

Doyle's "Lost World," which introduced his "Professor Challenger" hero (personality of Sherlock Holmes, physique and personality of a linebacker). The story is pretty straightfoward...Challenger, on a trip to the Amazon, found a plateau where living dinosaurs could be found. Nobody else believes him, but a party is formed to investigate his claims, and they have various adventures before returning to London.

The story is fun entertainment. It is listed as a kid's story by Audible and it is generally appropriate for kids (assuming they can handle heroes begin chased by dinosaurs). The story is rather dated (it was written in 1912), and this production tried hard to keep the period flavor intact without keeping the attitudes (e.g. in the European heroes' interactions with the South American natives) that many find unacceptable in the 21st Century. In general, they did a good job on that score.

The production is fun, with multiple voices acting out the parts (there are 4 main roles and about 8 minor ones), and it's a quick couple of hours listen. The production values are so-so, with a bit of crackle and hiss (when transcribed from cassette tape?) and some of the voices are hard to make out.

Overall, worth a listen.