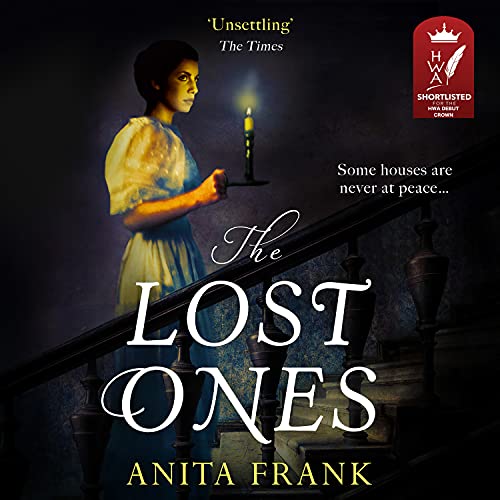 By: Anita Frank
Narrated by: Olivia Dowd
Try for £0.00

Some houses are never at peace.

Reeling from the death of her fiancé, Stella Marcham welcomes the opportunity to stay with her pregnant sister, Madeleine, at her imposing country mansion, Greyswick - but she arrives to discover a house of unease and her sister gripped by fear and suspicion.

Before long, strange incidents begin to trouble Stella - sobbing in the night, little footsteps on the stairs - and as events escalate, she finds herself drawn to the tragic history of the house.

Aided by a wounded war veteran, Stella sets about uncovering Greyswick’s dark and terrible secrets - secrets the dead whisper from the other side....

In the classic tradition of The Woman in Black, Anita Frank weaves a spellbinding debut of family tragedy, loss and redemption.

"Supernatural and historical intertwine in Anita Frank’s unsettling first novel...reminiscent of other tales of the supernatural, but conveys its own frissons and shocks." (Sunday Times)

"With wonderful character...This is a brilliantly gothic adventure – and the perfect winter page-turner." (Sunday Mirror)

What listeners say about The Lost Ones

This was a delightful old fashioned ghost story full of atmosphere and well plotted with memorable characters. A strong debut

This book has a great balance between the power of suggestion and spookiness that isn't spoilt by a 'goul'. I really enjoyed the story and there were some unexpected moments that I did not see coming. At various parts of the story I could not stop listening and I listened to the whole book within 2 days. Would reccomend!

I cannot praise this book enough - in every way from the storyline to the narrator. The author manages to grab the readers/listeners attention from the beginning and draw that finishing line in so that you are well and truly hooked.
I feel at a loss now that it’s finished!

Pleased I found 'The Lost One.'

An excellent ghost story, very creepy if listened to in the dark!

I look forward to the next book by this talented writer.

quite a good story but...

Not a bad story but performance isn't great- several weird mis pronunciations including the immortal 'bald paté' . the fat shaming descriptions of the cook made me VERY uncomfortable. there's just no need for all those unpleasant adjectives.

A good story with twists and turns. The horror and heartbreak of war combined with ghosts and murder.
I look forward to her next book.

Easy listening, ok plot , but have heard better from Audible .Something light to listen to

Well. Can't help thinking that you may as well let sleeping dogs lie. But we have to expose the (predictably) lesbian psycho. So many places this book could have gone but it had to go there. Which was a shame since we saw it coming a mile off. Also. It's just polite to be nice to your servants of they've saved your life and they're father died trying to save your sister. Plenty of better period ghost/crime books out there. But it's well read and passed the time.

I loved this book from beginning to end!
The historical setting, the engrossing characters and the supernatural story made it hard to put down. The narrator was perfect in her delivery of the characters and I thought that she did a brilliant job. I would recommend this to anyone who enjoys a haunted house story but with elements of danger attached.

I quite enjoyed the story which was a cross between a ghost story and a murder mystery featuring Hercule Poirot but it just dragged on and on so that by the end I was totally fed up with it. The story could have been told in half the time and that ruined it for me. The other negative was the narrator - her pronunciation of a lot of the words was laughable!!