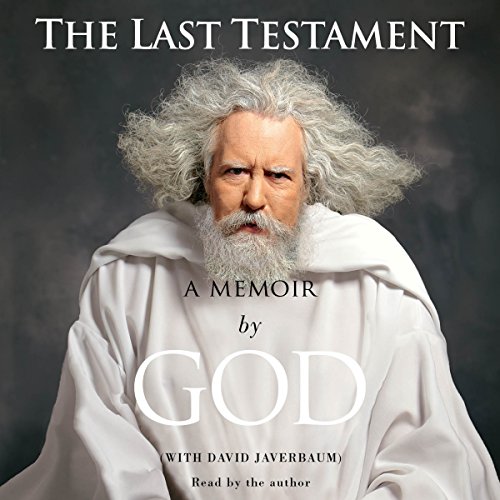 Over the course of his long and distinguished career, God has literally seen it all. And not just seen. In fact, the multi-talented deity has played a pivotal role in many major events, including the Creation of the universe, the entirety of world history, the life of every human being who has ever lived, and the successful transitioning of American Idol into the post-Simon Cowell era.

Now, as the earth he has godded so magnificently draws to a Mayan-induced close, God breaks his 1,400-year literary silence with his final masterpiece, The Last Testament.

As dictated to his mortal amanuensis, 11-time Emmy Award-winning comedy writer David Javerbaum, God looks back with unprecedented candor on his time in the public sector. He takes us behind the scenes of Genesis, setting the record (un)straight on the real first couple, Adam and Steve, and challenging long-held notions about the viability of containing a phylogenetically complete double bestiary within a 450,000-cubic-cubit watercraft.

For the first time, he breaks his silence on Jesus Christ, shedding light on a father-son relationship as heartwarming as Will and Jaden Smith’s. And he reveals his true feelings about his third great faith, Islam, WHICH ARE NOTHING BUT POSITIVE AND RESPECTFUL.

But The Last Testament doesn’t just look back. It also offers God’s perspectives on the perennial quagmires of love, marriage, and smiting. And he takes an 27.99 unfiltered look at contemporary society, addressing such hot-button topics as:

Sometimes preachy, sometimes holier-than-thou, but always lively, The Last Testament is a tale of courage, adversity, and triumph. It’s the ultimate celebrity autobiography, sure to appeal to not only hardcore God fans and "worshipers", but to anyone who’s ever had total omnipotence. If you place complete faith in the literal truth of one book written by God, make it The Last Testament.

What listeners say about The Last Testament

Where does The Last Testament rank among all the audiobooks you’ve listened to so far?

This is one of the funniest audible books I've listened to.

I think it was touching when God realised that up he had a defect in his personality and wrath management issues.

It's funny from the get go and I doesn't let up.

Thou shouldst definitely give it a go.

good fun for the unreligiously engaged

This book starts from a highly amusing premise: that God is complicated and for some reason wants to lay out his own case although, since he is the Lord thy God, question him at you peril!
Mirthing, smiting and all kinds of revelations ensue but, just one word of warning: if you have a strong religious conviction this probably isn't for you.
If, on the other hand you are having doubts about faith it may well crystallise some of those concerns through the vehicle of comedy.

a balance between dark humour and darker satire

It seems to be a fantastic balance between humour, theology and satire without being heavy handed.

Have you listened to any of David Javerbaum’s other performances? How does this one compare?

Handelling of the deeper subjects varies from well thought to silly. The bible references seem well researched. The humour is very american. Definitely going to upset a few people but what would you expect?

If you want a light-hearted, intelligent and funny review of the the last testament and you're not easily offended then listen to this.

I bought this book for my holiday to Israel and it contains many interpretations of the bible. if you like the works of Monty Python then you will like this.

Adam and Steve get a mention, and the book is narrated by god. So what you get is the real thing! Enjoy.

What would have made The Last Testament better?

I read a similar book to this called The Creation Memos years ago, and enjoyed it. This one isn't remotely in the same league. The story wasn't well structured and the presentation really didn't help.

Not smitten in the way the Almighty liked to smite, but in a good way. I see that I am the first reviewer, perhaps because others fear that if they were critical of this book then they might be cast into the waters or cast into the depths or cast asunder. Yet I have no fear, for I bring only praise. Not just for God, but for his casting. This time it's not asunder, but Javerbaum and In choosing him, God has picked the perfect reader. Pitch, tone, nuance, timing - it's all there. Javerbaum does a great God impression and it had me laughing the whole way. I'm sure this book is funny on the page, but I can't imagine it is as good as hearing Javerbaum's rendition.
My only hesitation in buying this was my fear that the conceit wouldn't sustain, but, verily and merrily, (also the name of a famous sister vaudeville act) though I'm only 3 hours in, it still works and I'm still loving it and I couldn't wait to recommend it, which am doing not just here, but to all my friends and my mother and my Rabbi as soon as I see him.
Lest you think I'm an easy laugh, I will tell you that I am not. Like Javerbaum, I have been a stand-up comedian and a writer for sitcoms (Seinfeld) and can tell you that generally other comedy writers make for a tough room. Even good humor books, though I appreciate them, rarely surprise me. We comedy writers already have the jokes figured out. However, this one constantly has me laughing out loud.
I usually delete my books as soon as I'm done, but this one will stay on there to listen to again and to play favorite excerpts for others. Praise the Lord.

Too much of a good thing quickly turns boring

I have started listening to this book twice. First attempt I got about 3 hours into it (to about the story if Moses) this time I'm about 5.5 house into and I honestly can't remeber what I listened to last (I was somewhere around the site of the prodigal son but I can't tell you a thing about it).

That's the problem with this book. it starts off pretty funny but the humor doesn't change enough and now I just don't care to listen anymore.


David Jacerbaum has an easy flowing writing style and he reads the book well. Great emotion, voice, and timing. But I feel that this "account" would go over much better with me in 'vignettes' or episodes not 9+hours stright.

As often happens with absurdist satire the concept, and even initial execution, is funny. But it just isn't enough to keep it going.

I'm now torn between really not wanting to listen to the rest (another 4.5 hours) and my obsessive need to finish every book I start. "God" knows I don't want to come back and start this book a third time!

The whole book..it shook me...I was shaking with laughter

Not for religious zealots

Strong start - Weak finish, but ultimately worth reading. Smart laughs more often than cheap jokes. General knowledge of the Big 3 Abrahamic religions a must for some bits. Definitely worth my time. Would recommend to atheists and religious moderates with a sense of humor.

Kind of dragged on towards the end. Pretty funny though and I would recommend it.

What made the experience of listening to The Last Testament the most enjoyable?

That I didn't have to read the book. Love the idea of listening to someone else reading it to me like having some one reading a bed time story.

What other book might you compare The Last Testament to and why?

Really not sure I haven't read any other book to compare it to other than the Bible.

Which character – as performed by David Javerbaum – was your favorite?

Took one day for first part finished the second in one say.

Just a great book. Will think about getting the full membership for other books.

The Testament Everybody Needs

This book is a masterpiece of comedic literature. I couldn't put it down and laughed so much I would read it again and again.

David Javerbaum does his work justice by voicing Jehovah; he's charming, funny, and easy to anger... Everything you want in an almighty!

Not necessarily for the bible thumper but anybody religious or not should listen to this fantastic take from the big G himself on the old and new testaments of the bible (with a bit of the Koran thrown in for good measure of course)!

Where does The Last Testament rank among all the audiobooks you’ve listened to so far?

The book does not rank that high at all. I knew about the book when it was in print, however I waited for the audio book.

What was most disappointing about David Javerbaum (contributor)’s story?

The story started off great, however it just started getting ridiculous. I just had to stop listening to it.. it was that bad.

Which character – as performed by David Javerbaum – was your favorite?

The story started great! The author was great in description and story line. I think it was when the story got into the part where God was getting married that it was just off the wall. At that point, I had a hard time staying focused on the book and it was just getting more ridiculous at that point. I just stopped. I didn't even get to the second part of the book.

What would have made The Last Testament better?

I tried to listen to this book many times and just couldn't get into it i even skipped ahead and just didn't like it.

What disappointed you about The Last Testament?

Too many poor jokes. A neat idea just destroyed by one awful joke after another.

Can I get my money back?