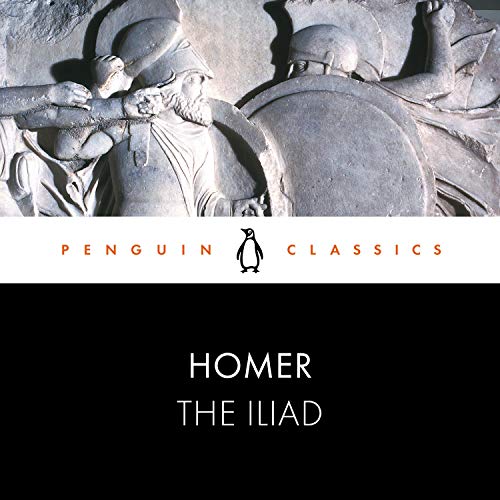 This Penguin Classic is performed by Steve John Shepherd, whose theatre credits include Much Ado About Nothing at the Globe, The Good Canary directed by John Malkovich, Bomber's Moon and Piaf. His TV and film credits range from the iconic This Life to Silent Witness and Eastenders. This definitive recording includes an introduction by E. V. Rieu.

One of the foremost achievements in Western literature, Homer's Iliad tells the story of the darkest episode in the Trojan War. At its centre is Achilles, the greatest warrior-champion of the Greeks and his refusal to fight after being humiliated by his leader Agamemnon. But when the Trojan Hector kills Achilles's close friend Patroclus, he storms back into battle to take revenge - although knowing this will ensure his own early death. Interwoven with this tragic sequence of events are powerfully moving descriptions of the ebb and flow of battle, of the domestic world inside Troy's besieged city of Ilium and of the conflicts between the Gods on Olympus as they argue over the fate of mortals.

What listeners say about The Iliad

The Iliad needs to be heard read aloud so one can appreciate it as originally intended. Steve John Shepherd does a masterful job of bringing this famous translation alive. You are soon transported back to the shores of the Troad, fully immersed in the fated struggle between the warring humans and gods. It is easy to see why this work obsessed the classical world and still exerts its power today.

The beautiful narration of this classic tale brings this wonderful story to life. A great listen.

A clear and emotive performance- even amid the many scenes of carnge in combat the narrator resists the urge to speed up and become too loud, instead putting emphasis on key words, making these warriors seem very dangerous indeed- Gripping stuff!

I think the narrator was well chosen for this classic work as he uses a serious, ‘heroic’ tone throughout which suits the story very well.

Narration not as good as that of The Odyssey

Although I fully agree that both The Iliad and the Odyssey benefit from being listened to, I also believe that the narrator's tone must be suited to these ancient Epic Poems. In that sense, George Blagden's narration of The Odyssey for Audible is, in my opinion. modelic. Instead, Steve John Shepherd's narration of the Iliad is not. The narrator adopts a contemporary dramatic register, maybe in order to make the story more lively and entertaining, but that, again in my humble opinion, destroys its pathos.

Having said that, the Penguin text on which this Audible narration is based, is without any doubt, the best prose translation of the Iliiad.

Not word for word

It was a great retelling of my favorite epic. I enjoyed the notes at the end, it was nice to have the academic analysis at the end of the story...which is a story I have always watched in my head. Also, the narrator has a fantastic voice for telling this story.

The greatest book Mankind has to offer.

A great take that captures both the best and worst of humanity
The savagery and nobility.
Genius and captivating. A the novel to behold.
all my homies read the Illiad