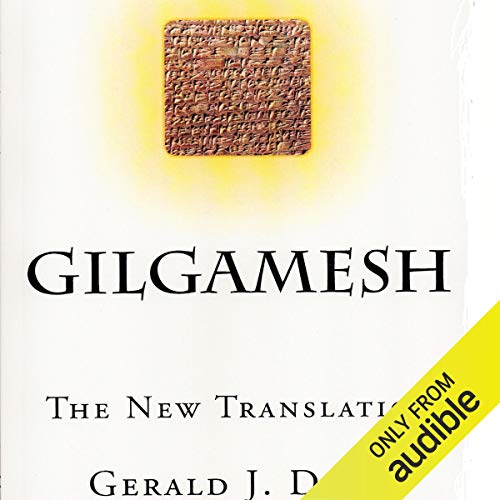 The Epic of Gilgamesh is the oldest story that has come down to us through the ages of history. It predates the Bible, The Iliad and The Odyssey. The Epic of Gilgamesh relates the tale of the fifth king of the first dynasty of Uruk (in what is modern-day Iraq), who reigned for 126 years, according to the ancient Sumerian list of kings. Gilgamesh was first inscribed in cuneiform writing on clay tablets by an unknown author during the Sumerian era and has been described as one of the greatest works of literature in the recounting of mankind's unending quest for immortality.

What listeners say about Gilgamesh: The New Translation

Good narration and translation of Gilgamesh.

Good audio book of the epic Gilgamesh. Good narration as well. Recommend to anyone who wants to read the Gilgamesh

a great world classic. a must read

a great book about a great human quest for immortality. Inspiring and thought-provoking.
But the biggest impression of this book for me was actually in the preface. I found out that Gilgamesh was discovered and translated by two amateurs, not professional scholars. An inspiring discovery indeed.

Before I begin my review on the story, the Narrator: John Hanks, deserves a mention first. His voice is captivating, inspiring and created a perfect match for the story of Gilgamesh. I listened to the book in its entirety in one sitting!

Now the story. Although this is the oldest recorded story we have found in human history, it holds up as a gripping tale. The themes and relationships you discover in modern books are nothing new when you compare them being explored in Gilgamesh, thousands of years before in fact. The level of detail and imagination is amazing. If you don't want to listen to our world's oldest story, you are missing out.

Review of Gilgamesh:
I'm giving this 4 stars because it pseems to be a straight representation of the Gilgamesh writings without spin; & that's a fabulous thing to be offered. I won't give it 5 because I'm no scholar of ancient texts so I cannot be sure how faithful it is. If you want something interesting read this. If you want entertaining don't. It's soooo repetitive! & it's childishly ridiculous. But of course it wasn't written for my entertainment.

Listened to it on and off.
The verse repetition stuff seemed funny like it was meant for children except for some of the themes.

Poetic translation of an epic story

Disclosure: I received this audiobook from the translator in return for an honest review

After reading Gerald Davis's translations of Don Quixote and Beowulf (on audiobook), I was excited to read his new translation: Gilgamesh. Like these other two books, Gilgamesh is an epic story beautifully translated. It's the story of Gilgamesh, King of Uruk (now Iraq), his battle and then friendship with Enkidu, and later his solo quest. Although I generally haven't read the classics since high school and college, translations by Gerald Davis make content lyrical and accessible.

I originally read the Kindle version of this book, and enjoyed it. The audiobook version is even better, with John Hanks' vivid narration. Recommended.

I liked the story. And I recommend this to every listener. You will enjoy this, indeed!

I liked it, a lot

This t translation is my first exposure to this type of literature. It was a wonderful listening experience. The narrative was entertaining, engrossing and worth a relisten.

I really enjoyed this version of the tales of Gilgamesh. The story is great and easy to follow. As an added bonus the narration is done fantastic by John Hanks

Read the Stephen Mitchell version instead

This version and narration is okay, but the Stephen Mitchell version, read by a gifted narrator, is far more enjoyable. I could find almost no differences in the Mitchell and Davis ‘translations’, but when differences did occur I preferred the Mitchell version. While somewhat interesting, the two supplemental appendices in this version are repetitive to the point of being unlistenable and add next to nothing to the core narrative— for those interested just google “Tablet 12 Gilgamesh” and “Death of Gilgamesh”.

Go into this understanding that storytelling has developed over time, and that certain repetitive patterns will show up.

The first appendix is worth skipping unless you are interested in it for completionism or to know what the writer believed happened to various people in the afterlife.

All the rest is very good.

Only thing I would note is that, despite this being a new translation, there is one word that I totally didn't get and only eventually understood by context. It sounds like "sucker" but is a verb which means something like "to help".

This is such an incredibly entertaining and deep story. The performance is perfect.

Let yourself experience the joy of humanity’s oldest story.

It was... OK. Still worth the listen though.

What did you love best about Gilgamesh: The New Translation?

Would you be willing to try another book from Gerald J. Davis? Why or why not?

Probably not. IDK. I read this book because I have heard the name of it so many times I figured I was doing myself a disservice not to listen.

I'm glad I listened to the book, although I wasn't all that intrigued. I'm not that surprised though, after many translations and four millennia, it's understandably different from what I expect a book to be. I do recommend it though. I'm glad I listened.

The narrator did a fine job, however this rendition was so repetitive that it was hard to maintain focus.

Where does Gilgamesh: The New Translation rank among all the audiobooks you’ve listened to so far?

This is one of the best audiobooks I have ever listened to.

The inspiring and majestic story line.

What does John Hanks bring to the story that you wouldn’t experience if you just read the book?

His acting ability to breathe life into the words is extraordinary.

The eternal words of Siduri, the Maker of Wine.