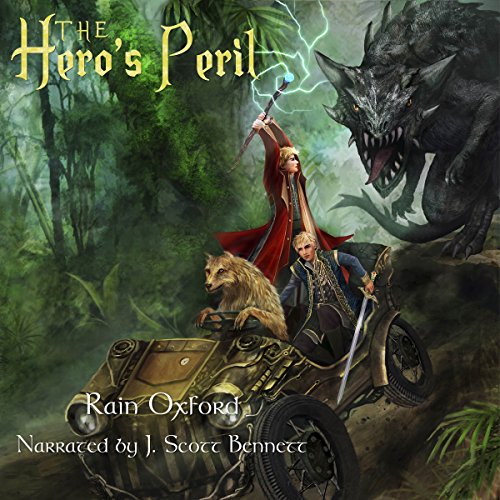 The black star has been averted, but Ayden and his friends are not out of danger yet. When he and Merlin realize that Ayden's reputation as a curse breaker does more harm than good, they decide to travel, only to be captured by assassins the next morning. They have gained the attention of powerful people, and they will have to be clever and vigilant not to become pawns. What begins as a quest to clear up a misunderstanding and uncover the disappearance of a missing wizard, soon becomes an adventure of peril and magic, which will test Ayden's abilities, Merlin's wisdom, and an immortal prince's bravery. They will face monsters, deadly traps, powerful foes, and even more dangerous allies.

What listeners say about The Hero's Peril

I Enjoyed this audio book very much from start to finish great story line too
I was voluntarily provided this free review copy audiobook by the author, narrator, or publisher.

To become an immortal, one first has to die.

Continuing the adventures of Ayden, seventh son of a seventh son, and Merlin, this time in the shape of a wolf. After capture by assassins who take Ayden before his assumed parents, the two companions realise that Ayden has a double, a prince made immortal and charged with the protection of a dragon egg. A new quest begins, to save the egg and the three travel through different worlds and face numerous attacks and life threatening choices. There are dragons and monsters, mirror portals, miraculous inventions, even a shopping mall - and a little girl looking for he pussy cat!

Lots of fun and humour well written into this delightful series, told in the first person by Ayden (with an occasion unwelcome comment from elsewhere). The characters are shiny bright and, despite the tricks, betrayals, monsters and magic, the whole retains a charming innocence. A pleasure for older children and refreshing, too, for adult readers.

Narrator J.Scott Bennett continues to be the ongoing voice of Ayden as well as breathing extra life into all of the other characters with his flawless interpretations, differentiated voices and wonderfully cadenced reading.
Lots of action, imagination and fun.

This series are good adventure stories and good coming of age .Stories well written full of surprises and both innocent and sophisticated

I have put Rain Oxford on my must read list! I absolutely love her books. This is another wonderful continuation of Ayden's and Merlin's adventure.
I love how Ayden can be so literal. Make me laugh every time.

I love J. Scott Bennett's voice. He also brings the characters to life.

This is a promotional copy and this is my personal review.

This is another great audiobook in the Sorcerer’s Saga. It’s an excellent adventure story with characters that have depth and make you laugh. Aiden’s talents continue to improve and even though he is faced with one problem after another he still retains his innocence and pure heart. The humorous repartee between him and Merlin makes you laugh, as does his oblivion to the relationship between Mason and his brother. J Scott Bennett’s narration fits the book perfectly. His intonation and tone make each character unique and brings the whole story to life. This is a thoroughly enjoyable story that continues a great series. Just when you think that Aiden and Merlin have found solutions to most of the problems, the author throws in a twist and you happily realize that there is much more adventure to come.

We get to follow more of the adventures of Ayden and Merlin.... and we meet someone who looks just like Ayden (as if one of him wasn't enough).

This book was quite the ride. I could not get enough of it! The story was fantastic. This has been my favorite book yet in The Sorcerer's Saga. If you've not listened to the others, pick them up along with this one. I doubt you'll regret it!

For me, the narration of this book is up there with Jim Dale. I absolutely love books narrated by J. Scott Bennett and can't recommend him as a narrator highly enough.

Fantasy at its finest

I really enjoyed this book (as well as the previous books in the series). Though this would probably be geared toward middle grade and older children, it is entertaining even to adults. This book had a great story and great characters. I particularly enjoyed all the descriptions of modern dress as seen from an outsider. This book is just a lot of fun. I listened to the Audible audio version of the book narrated by J. Scott Bennett. I love all of his narrations, and this one is no different. He does a great job of really bringing the characters to life.

At my request, this audiobook was given by the author, narrator, or publisher at no cost in exchange for an -->unbiased<-- review

This is more of the relationships and banter that I've come to love. Aiden and Merlin, humorously at times, face off against new challenges and foes and craft their own unique solutions. Through it all, there is action, character development, and PLOT. I have found the whole series to be solid and well-written. What's more, there is now a new series starting in the same universe. This book, in some ways, leads into that new series, and it is great it on its own merits too! I am committed to the series at this point and I have been following it for a long while. When I hear of a new book, I will be itching to get my hands on it! The quality of Rain Oxford and J. Scott Bennett has been consistent through all of their books together and it has been a pleasure to listen to.

A slow starting story that finally gained some momentum and then seemed to just peter out.

Fun times with Alice and Kitty

This book took us for a little spin into other realms which I thought very fun. I do wonder when and if we ever break Merlin's curse. Curious minds want to know!

I like fantasy, but I just couldn't get into this one. The story has all the elements that should get me going - magic, world jumping, supernatural creatures, etc. It was the writing and use of language that failed to draw me in.

For narration, this narrator was okay. There's not much to complain about, but there also wasn't anything that blew my socks off. He has what I think of as a story time fairy tale voice. I think that his voice needs a certain kind of novel to really shine. Light hearted fantasy yes... That's what this was, but even the best narrators are limited by a lackluster script. Unfortunately I didn't get to hear a huge range of his acting abilities in this novel.

I was worried when the first section was called Exposition. It was filled with... exposition. After the Exposition we got a Prologue which was also filled with exposition. I'm not using quotes here because for some reason Audible always mucks them up when they post a review. I don't think the author realizes how mind numbing it is to slog through page after page (or in case of an audiobook minute after minute) of it. Eventually the concentration of it gets watered down, but it never completely leaves this story. By the time I'm able to see the story coming together, I don't care enough to follow through with it.

There are a few points in the story where things seem to move forward, but the language is meandering, and it was hard for me to get attached to any of the characters. Most of the time I just wanted it to end so I could move on to something else more interesting.