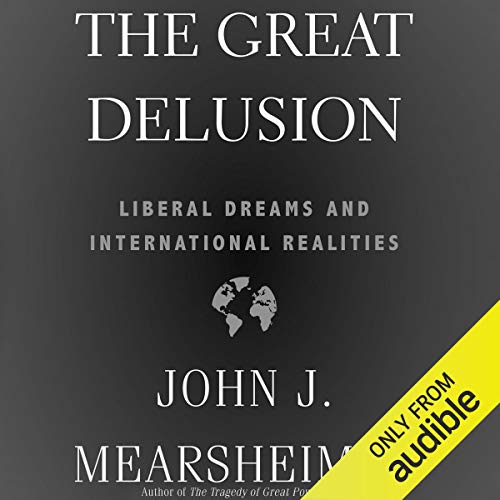 In this major statement, the renowned international-relations scholar John Mearsheimer argues that liberal hegemony, the foreign policy pursued by the United States since the Cold War ended, is doomed to fail. It makes far more sense, he maintains, for Washington to adopt a more restrained foreign policy based on a sound understanding of how nationalism and realism constrain great powers abroad.

It is widely believed in the West that the United States should spread liberal democracy across the world, foster an open international economy, and build institutions. This policy of remaking the world in America’s image is supposed to protect human rights, promote peace, and make the world safe for democracy. But this is not what has happened. Instead, the United States has ended up as a highly militarized state fighting wars that undermine peace, harm human rights, and threaten liberal values at home. Mearsheimer tells us why this has happened.

What listeners say about The Great Delusion

The basic premise of Mearsheimer's book is that Liberal Hegemony, the dominant foreign policy strain of the US since 1991 is not only ineffective, but harmful for both the supposedly liberated people and the US public.
Mearsheimer's argument is essentially two pronged, that Liberal Hegemony is social engineering writ large and that Liberalism is always overwhelmed by realism and nationalism.
Mearsheimer's book resonates with this reader as I cannot help but recall my undergraduate professor of political theory proclaiming that Nationalism is the most powerful of all ideologies. This book simply vindicates such a view, as Mearsheimer's provides ample illustration how nationalism trumps liberalism every time.
Mearsheimer, while providing a decent theoretical explanation, concludes the book with an appeal for the US to return to a more restrained realism based foreign policy and to jettison Liberal Hegemony altogether. Mearsheimer contends that this will be necessary if the rise of China ensures a more multi polar world, but a slowing down of China could essentially result in the US being disincentivized from jettisoning Liberal Hegemony. The main obstacle to this is the foreign policy establishment, who successfully modified any restraint Obama intended to introduce into US Foreign Policy, and so far, seem to have persuaded Trump to adapt to some aspects of Liberal Hegemony, despite his stated opposition to it.
Mearsheimer's argument is solid, well supported and has convinced me at least, and is an outstanding piece of international relations literature.

A great expose of the liberal delusion

A no-holds analysis of global reality. If you want to understand the world we live in, rather than the world liberal elites want you to believe you live in, this is a must read.

The authors explains clearly what liberalism is and is not, both as internal doctrine and as external policy. I definitely learned a lot and saw some things in new way. I wish the book was much less repetitive

Mearsheimer brilliantly probes the subtle and nuanced dimensions of modern foreign policy, at high level commensurate with his decades of scholarship, accessible to any curious reader.

In contrast to the 500 word essays common in typical popular opeds, Mearsheimer does not try paint US foreign policies in pallet consisting of just black and white, or red and blue. His deep analysis, exposes raw the purist ideologies (which I lean towards) of libertarian isolation, neoconservative intervention, or panglossian liberalism as flawed.

Though subtle, his well documented analysis is ultimately optimistic, in that his realist prescriptions based on recognizing the inherent nationalism of all peoples as a force greater than liberal democracy or authoritarian communist philosophies. He argue realism will lead to less foreign intervention, less wars, and less suffering.

I loved this book but at times it was hard to consume by listening as I had to rewind many times to understand the ideas. But my real criticism is for the performer who should have learned to properly say things like realpolitik before he was allowed to read this book.

In my view the USA has had foreign policy intervention s since the end of the Cold War that harned both the national interest and the peoples of the countries targeted for intervention and attack. It is refreshing to read a realistic international relations scholar explain just how erroneous is the US liberal hegemony ambition and how much we are, at great expense, harming our own interests.

Excellent arguments! Nationalism is an unbeatable force. There’s no way to win the hearts and minds of others. Nationalism has already done it.

A must read for all Americans

A solid, unpretentious argument for adopting realism in our foreign policy as opposed to liberal hegemony which is actually supported by both political parties. This book will open your eyes to the disastrous results this approach to foreign policy has provided the US and will give you a broader, more reasoned understanding for why Trump was elected in 2016.

Mr. Mearsheimer is simply a phenomenal thinker/historian with regards to Great Power politics.

I encourage anyone who is curious about world affairs to read this book.

If you are open minded snd want to know why America’s foreign policy seems so off of our ideals, this book is a must read (or listen).

Had i not just listened to another of his books, which I finished reading here, it would have been fine. It was highly repetitive.