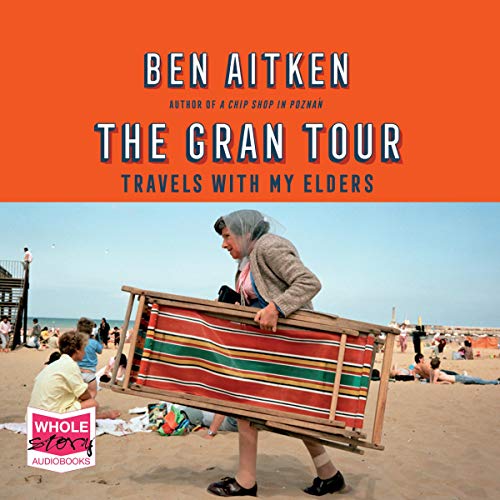 When Ben Aitken learnt that his gran had enjoyed a four-night holiday including four three-course dinners, four cooked breakfasts, four games of bingo, a pair of excursions, 16 pints of lager and luxury return coach travel, all for a hundred pounds, he thought, that's the life, and signed himself up. Six times over.

Good value aside, what Ben was really after was the company of his elders - those with more chapters under their belt, with the wisdom granted by experience, the candour gifted by time, and the hard-earned ability to live each day like it's nearly their last. A series of coach holidays ensued - from Scarborough to St Ives, Killarney to Lake Como - during which Ben attempts to shake off his 30-something blues by getting old as soon as possible.

What listeners say about The Gran Tour

This has the feel of an Adrian Mole story about it, what starts off as a joke great value cheap holidays becomes a journey in to a section of forgotten society eg old people , some are nuts ,some set in their ways, some just lonely and every so often there are gems. Not sure the tik tok generation will read this but one day they will be old and they may not have the social skills(or the money)to interact on a coach holiday like those in the book. Some people maybe put off by the narration but very english and dry humor wins the day.

An enjoyable listen, with the either hilarious or frustrating (I'm yet to decide) accents performed by the author. Everyone is from Yorkshire it seems, even if they're a Brummie. A lovely gentle listen, eye opening and makes you think, and want to slow down. To be honest I'd be booking on a coach trip if I could right now, and didn't suffer horrendous travel sickness, so I could sit next to my own Janet and Monica on the excursions.

This was a quiet, relaxing listen. Some people will object to the author's accent, but I much prefer the real thing to an actor. The topic is a good one. The modern world is so fixated on mindless youth culture that it sickens me. As the saying goes, the young don't know what it's like to be old, but the old do know what it's like to be young. I was tempted to take a coach trip myself after listening to this...

What a beautiful book. Funny, poignant and heartwarming. I thoroughly enjoyed listening to this book.

Just couldn't finish it as the monotone timbre of the author was just too irritating.

A book that shows the elderly for what they are: the same as younger people, but with way more experiences both to have learned from and to share. One minute I'm listening to an incredibly touching and insightful summation of what young Ben has gained from his new friends and the next I'm laughing out loud at their antics.

Aitkin's book reminds us that the lack of contact between young and old in our culture is a loss for both. I shall be off my phone more and looking for some bus tours should this pandemic ever end.