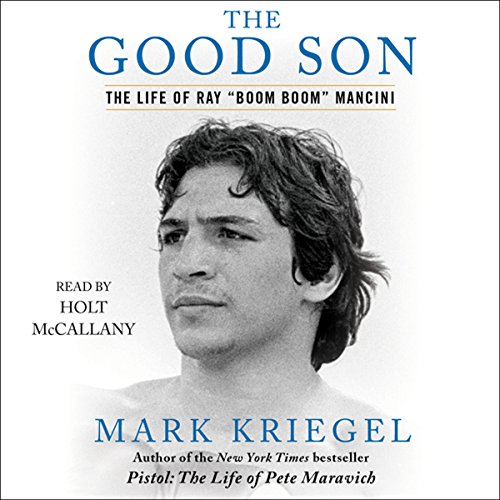 From the best-selling, critically acclaimed author of Namath and Pistol comes another remarkable biography: the life of Ray “Boom Boom” Mancini.

In the early 1980s, Mancini was more than the lightweight champ. He was a national hero. Sinatra fawned over him. Warren Zevon wrote a tribute song. Sylvester Stallone produced his life story as a movie of the week. After all, an adoring public considered Boom Boom the real Rocky. Lenny Mancini - the original Boom Boom, as he was known - had been a lightweight contender himself before fragments of German mortar shell almost killed him in 1944. By winning the championship just as he vowed - for his wounded father - Ray produced his own feel-good fable for network television.

But it all came apart in a brutal 1982 battle against an obscure Korean challenger. Deuk Koo Kim lost consciousness in the fourteenth round and died within days. Three months later, his despondent mother took her own life. The deaths would haunt Ray and ruin his image, turning boxing’s All-American Boy into a pariah. Now, 30 years later, Kriegel finally uncovers the story’s full dimensions, tracking the Mancini and Kim families across generations and excavating mysteries - from the killing of Mancini’s brother to the fate of Kim’s son. Even as the scenes move from Youngstown to New York, Las Vegas to Seoul, Reno to Hollywood, The Good Son remains an intimate history, a saga of fathers and fighters, loss and redemption.

“It’s easy to say The Good Son will go down as one of the great boxing books of all time. But in telling the story of Ray (Boom Boom) Mancini, Mark Kriegel has accomplished something beyond sports. His book is, put simply, a masterpiece; an ode to father-son relationships, to the drive and makeup of champions; to what it is to experience the high of a world championship and the low of watching an opponent die in the ring. There’s a reason Kriegel is one of America’s elite biographers. The Good Son is spectacular.” (David Mamet)

What listeners say about The Good Son

Best biography I have ever heard or read!

If you are old enough to remember boom boom mania in the early 80's please listen to this book. It is a beautifully moving and insightful look at a real and honest man who faced his battles with courage and dignity.

This was a fascinating read about an era in which I was thoroughly involved in pro boxing. The book helped me remember fights like they happened yesterday, and I learned all kinds of things about them I didn't know. Also, learning about Ray's personal life and his broken marriage was quite revealing. If you were a boxing fan during the early 80's, this book is a must!