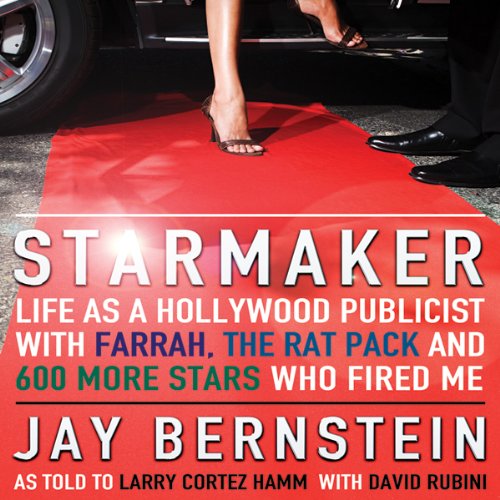 Revealingly candid, this Hollywood memoir is the story of Jay Bernstein, an entertainment industry fixture who helped launch and sustain the careers of many celebrities including Farrah Fawcett and Suzanne Somers. From his childhood in Oklahoma City and his first job in a Hollywood mail room to the ownership of his own public relations firm and his work as a television producer, Bernstein’s life is chronicled in his own words.

In addition to his rise to greatness, Bernstein also describes the relationships he had with stars and relates the stories behind some of the crazy stunts he pulled to garner attention, such as paying women to throw hotel keys at Tom Jones, having Entertainment Tonight host Mary Hart’s legs insured for one million dollars, and getting married underwater for an episode of Lifestyles of the Rich and Famous. Written with style and a sense of humor, this autobiography shares the intimate details of Jay Bernstein’s fascinating life.

What listeners say about Starmaker

If I had a pound for every time he said that Farrah Fawcett was the most wonderful person on the planet I would retire. She was at most an actress in a TV soap. she certainly was not one of the greatest actresses that ever lived. he drones on and on about her. I started to skip bits because of this. He is full of himself. Maybe in his day he was quite important but I doubt he was as wonderful as he makes himself out.

Tales from the shark pit

Okay, we all know what a bed of snakes Hollywood has always been, but this excellent title from a man who was at the sharp end of the industry for over 30 years and then some, will delight and enthrall anyone with even a passing interest in film and film stars.

Few escape with any dignity as Jay Bernstein (a self-confessed shark) lays bare the low blows, high egos and dirty double-dealing that is the lifeblood of Tinsel Town. Especially savaged are Sinatra (Frank and daughter Nancy), Lee Majors and Suzanne Somers, and you wonder how anyone can survive in such an atmosphere of mistrust and back-biting.

Arthur Morey does an excellent job of narration and keeps the pace going throughout.